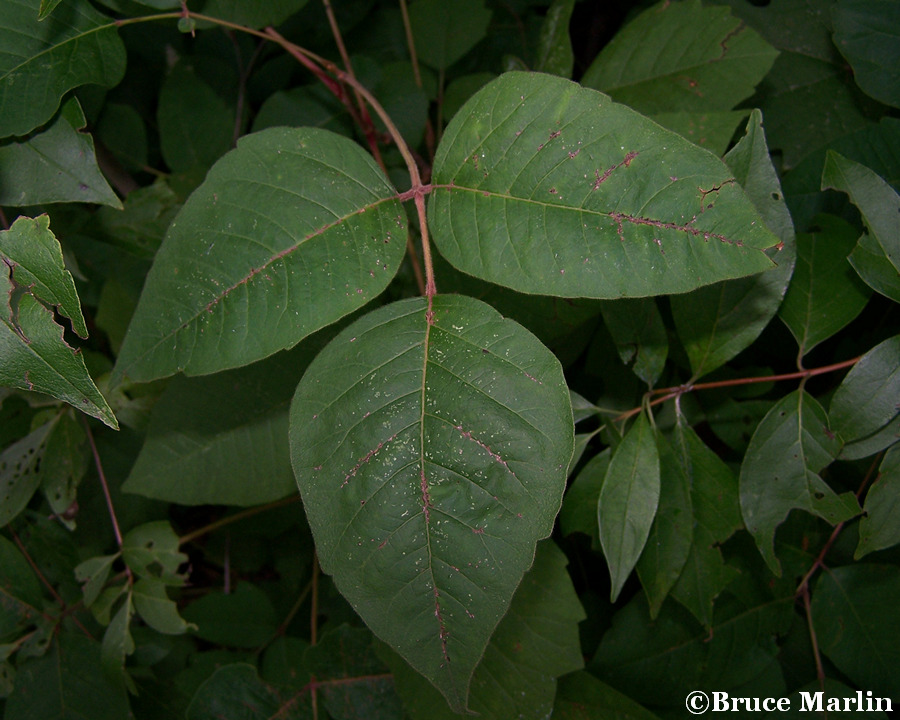 “Leaves of three, let them be.” Poison ivy grows as a shrub, a climbing vine, or simply blankets an area with low-growing individual plants. It’s easily recognized in all forms once you know what to look for – but what might surprise you is you must be looking constantly, especially in places formerly thought safe: the man-made increase of carbon dioxide in today’s atmosphere has caused the toxic trio of poison ivy, oak and sumac to grow larger, more dense and profuse – and the oil urushiol produced by today’s plants is more potent than plants of 20 or even 10 years ago. 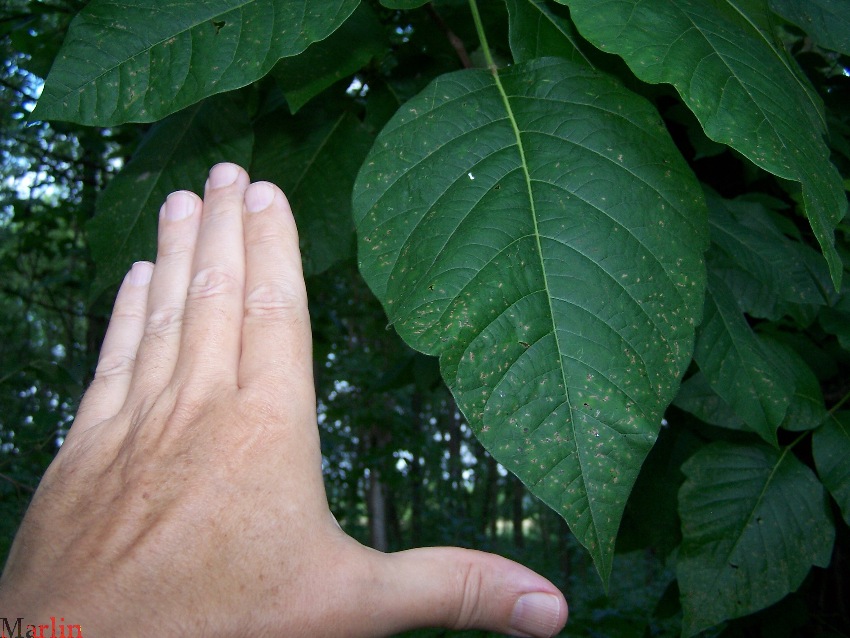 About 85% of  humans can be exquisitely sensitive to the oil urushiol contained in its leaves, stems, and roots[1]. The most common ill effect suffered by humans is contact dermatitis. Rash and blisters erupt on the skin, sometimes oozing and weeping, and always causing a extremely irritating itch. Less common but more dangerous is contact with smoke from burning ivy plants; the oil that causes the allergic reaction can be carried on smoke particles and can be deposited in the eyes, ears, or inhaled where it can cause serious lung problems. A high percentage of forest firefighters are stricken with ivy poisoning every year.

Your best bet is to avoid the plants in the first place. Learn to identify the plants and stay away from areas where they may lurk. If you think you’ve been exposed, immediately wash the skin with rubbing alcohol and / or copious amounts of clean water. Wash contaminated clothing at first opportunity. Clothing with the oil on it can contaminate furniture and will be a source of reinfection if not washed promptly.

Common Myths about Poison Ivy
Myth: Scratching the itch will cause the rash to spread.
Fact: Once the urushiol oil has bonded to the skin (the process taking only a few minutes), no amount of mechanical action is going to move the reaction to other parts of the body. Scratching does damage the skin and I can tell you from bitter experience it is nearly impossible to resist. What is known: Washing the rash with very hot water can release histamines in the skin that can bring dramatic relief from itching, sometimes for hours. Care must be taken, of course, not to burn yourself.

Myth: “I touch the plants all the time and never have a reaction. I must be immune”
Fact: Studies show only 15% of humans are truly immune. The others will react with repeated exposure.

Myth: “I never touched a plant, but I got a rash. It must travel through the air.”
Fact: The oil does not become airborne except in smoke and soot from burning poison ivy plants. However, there are many other means whereby the oil can travel invisibly: pets can pick up the oil on their fur and transmit it when handled, touching wood upon which the plants once grew can be a source of contamination, and the oil can be deposited on clothing only to be transferred to the skin on later contact. Repeat after me: Poison ivy does not travel through the air.

Myth: “I get poison ivy when it rains.”
Fact: The oil does not travel through rain. It can be present, however, in lakes and river water near where the plants grow, or where poison ivy or oak leaves, vines or roots trail into the water. Urushiol can easily be retained on rain gear exposed to the plants.

Myth: Drinking the milk of cows or goats fed on poison ivy plants can grant immunity to the rash.
Fact: Studies show the milk of such animals contains no urushiol and hence cannot desensitize us. Same is true of honey made by bees from the flowering plants. Pollen and flowers of poison ivy do not contain the oil [1].

Myth: Washing with yellow or brown laundry soap can prevent a reaction.
Fact: Soap has no effect on the oil urushiol. Urushiol must be neutralized by a solvent such as rubbing alcohol, or diluted with lots of water. Soap won’t hurt as long as it is used with lots of water.

Myth: Washing with the juices of the Jewelweed plant Impatiens capensis can prevent or cure reactions.
Fact: Although this folk remedy has ample anecdotal support, science has not been able to replicate the effect in experiments.

Myth: Home remedies are useless.
Fact: Although scientific proof of the efficacy of a certain remedy may be lacking, they can indeed bring dramatic relief to some individuals. The mechanism of such relief is not well understood, but may be comprised in part by a powerful placebo effect. As long as the remedy works and does not further damage the skin, it is probably useful.

I have firsthand knowledge of the spread and virulence of the new and improved poison ivy. In just the last few years, here in DuPage County about 40 miles due west of the City of Chicago, there is a new husky, brawling plant spreading rapidly in our forests, roadsides and waste places. I have been ardently photographing insects and spiders here since 1978, and areas where I used to move with impunity are now choked with the stuff; and not only on the ground: this shit is climbing the trees, up to 50 or 60 feet in some cases.

I know poison ivy has always climbed trees; but I also know it never used to be ubiquitous here. I have no doubt poison ivy is increasing its range northward, and the plants are hardier and more voracious of territory, and this is a symptom of man-made climate change due to our incessant and increasing burning of fossil fuels.