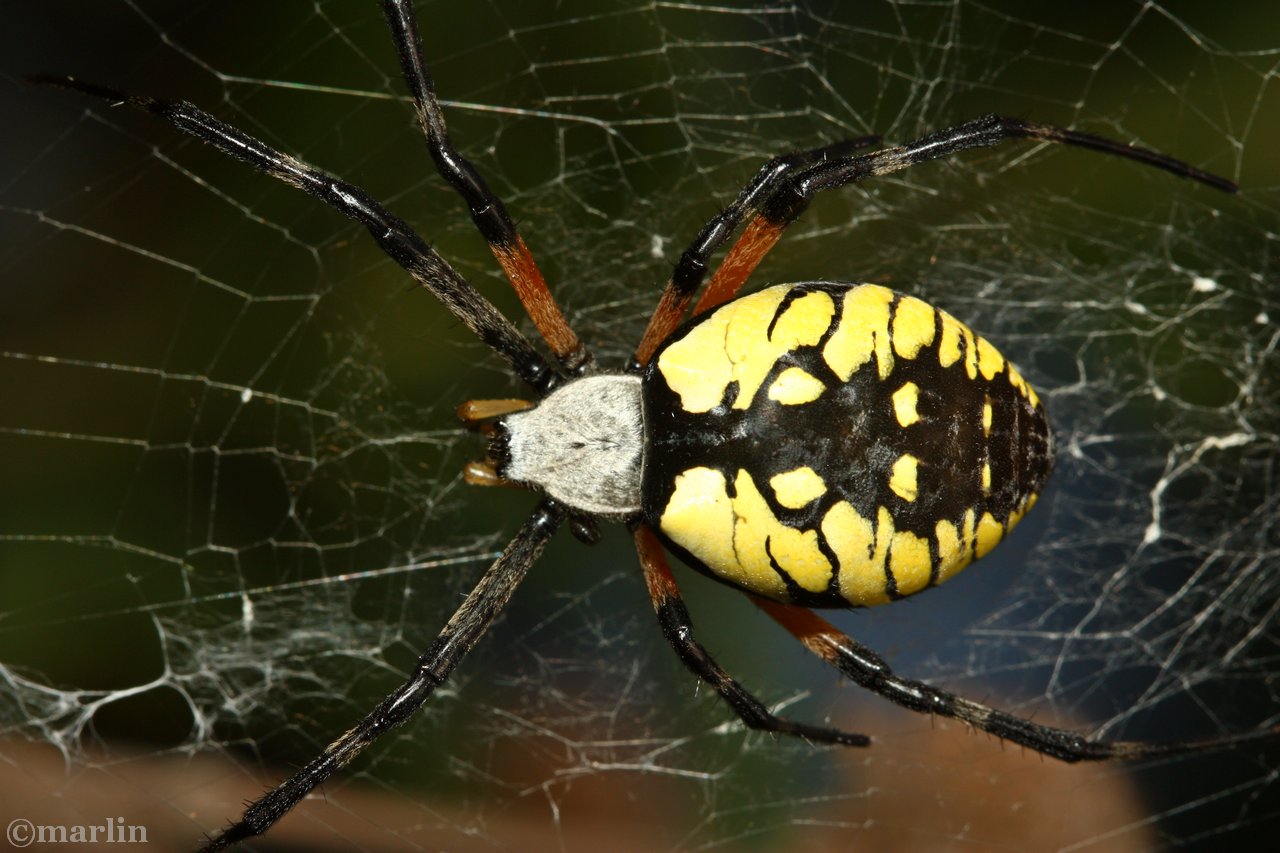 Also commonly called black and yellow Argiope or banana spider, this gravid female has reached her maximum size, about 15mm – spiders are measured by body length. Female Argiope are the largest spiders most people in the USA encounter. These charming creatures can be found in gardens and weedy fields from early summer to mid-Autumn, but become conspicuous only when they build their large webs toward the end of summer. They can be extremely numerous in small areas, making walking difficult without disturbing them. I know very few things as panic-inducing as walking through a big spider web. 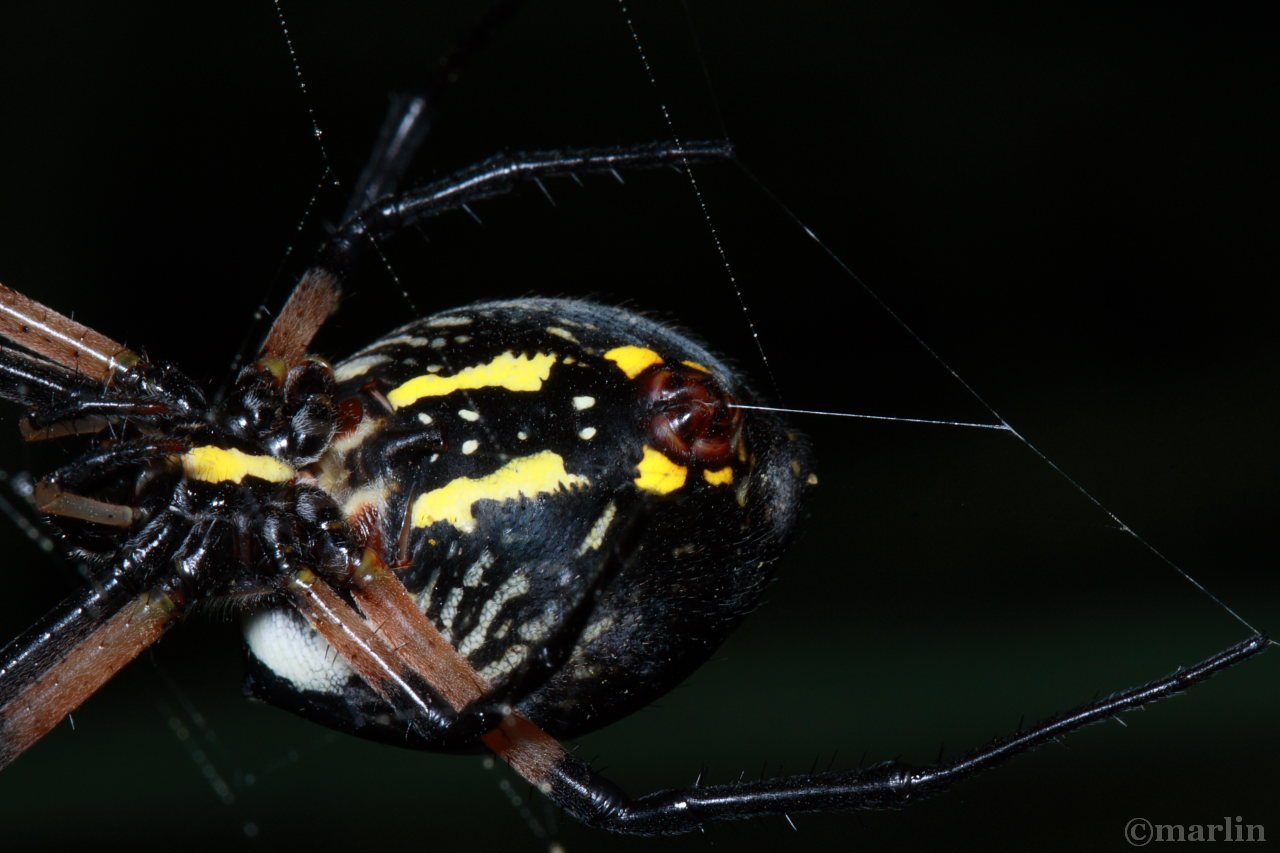 This ventral view of a female “banana” spider shows her attaching silk from her spinneret to the orb-web she is building. Spiders can produce many different types of silk depending on the intended use; prey capture or immobilization, nest building, and even dispersal – some spiders waft very fluffy silk into the prevailing breezes and are thus hoisted into the atmosphere, sometimes to great heights, where they can sail for hundreds of miles. I have seen them do it – they vanish as if by magic! 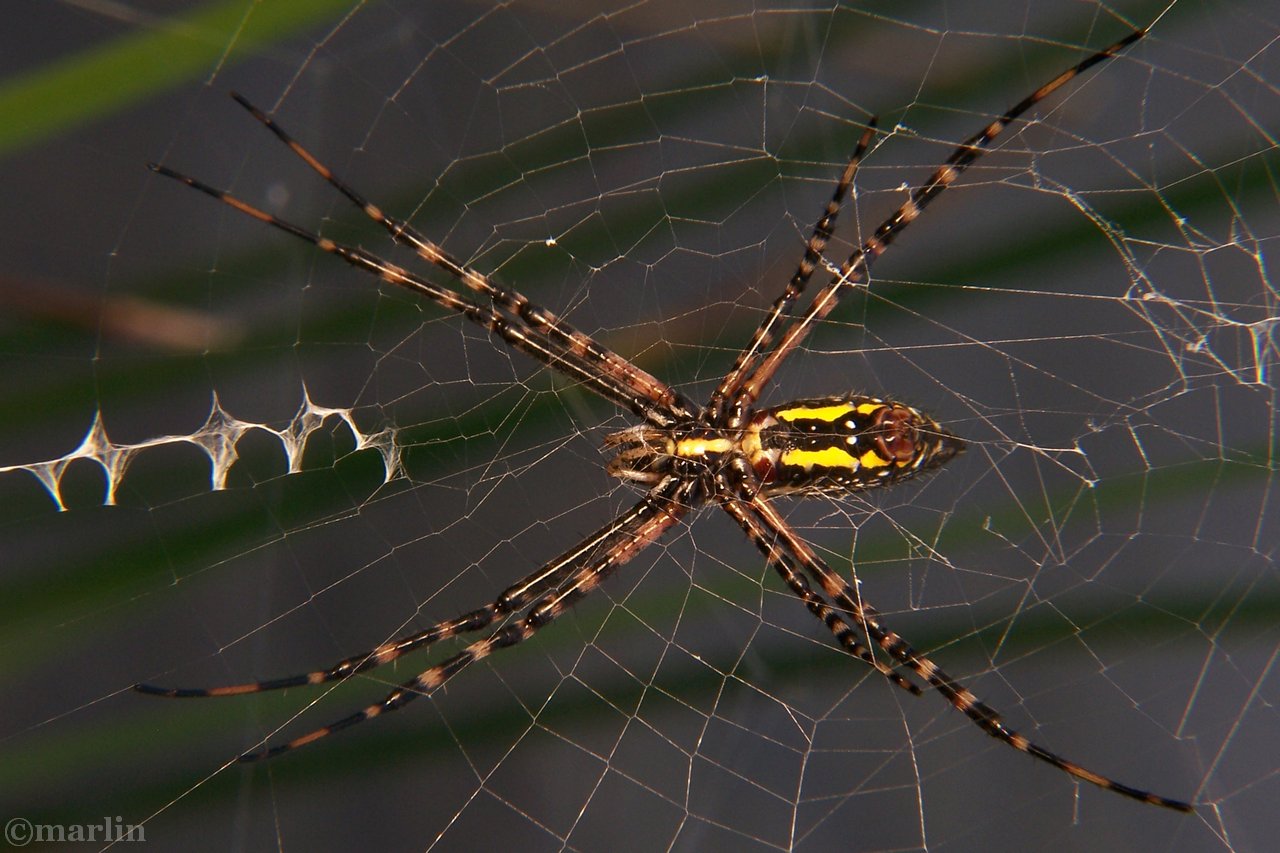 This newly-minted female has not yet begun showing a baby bump. The zig-zag pattern you see woven into her web is called stabilimenta – once thought to add stability to the web, we now know they are effective in helping to keep large flying objects (such as birds) from crashing into spider house. 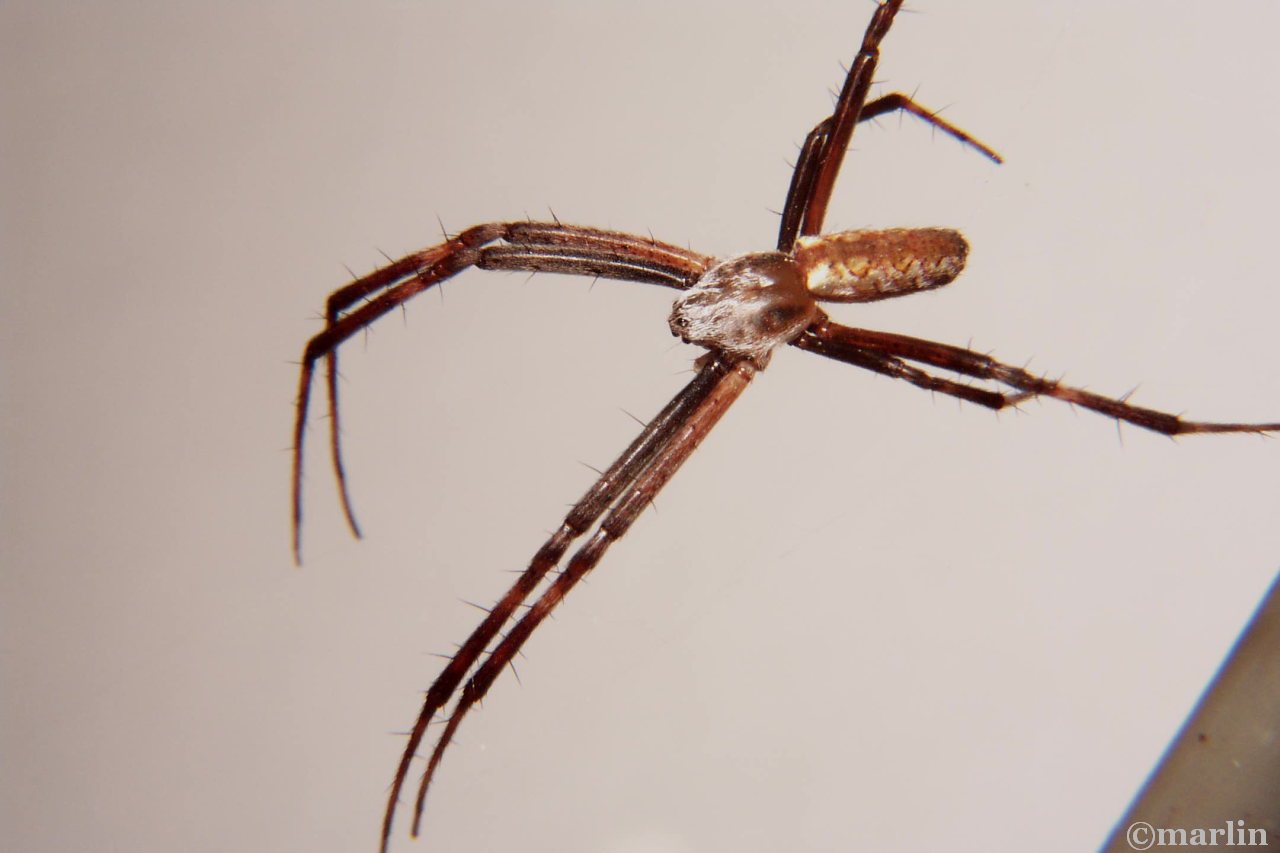 Argiope males are much smaller and less colorfully-marked than their huge girlfriends. Males are relegated to second-class status and lurk in small webs of their own built nearby. They avoid contact with her except for mating. Their danger of being eaten by her is very real, which must make for one very exciting date night. 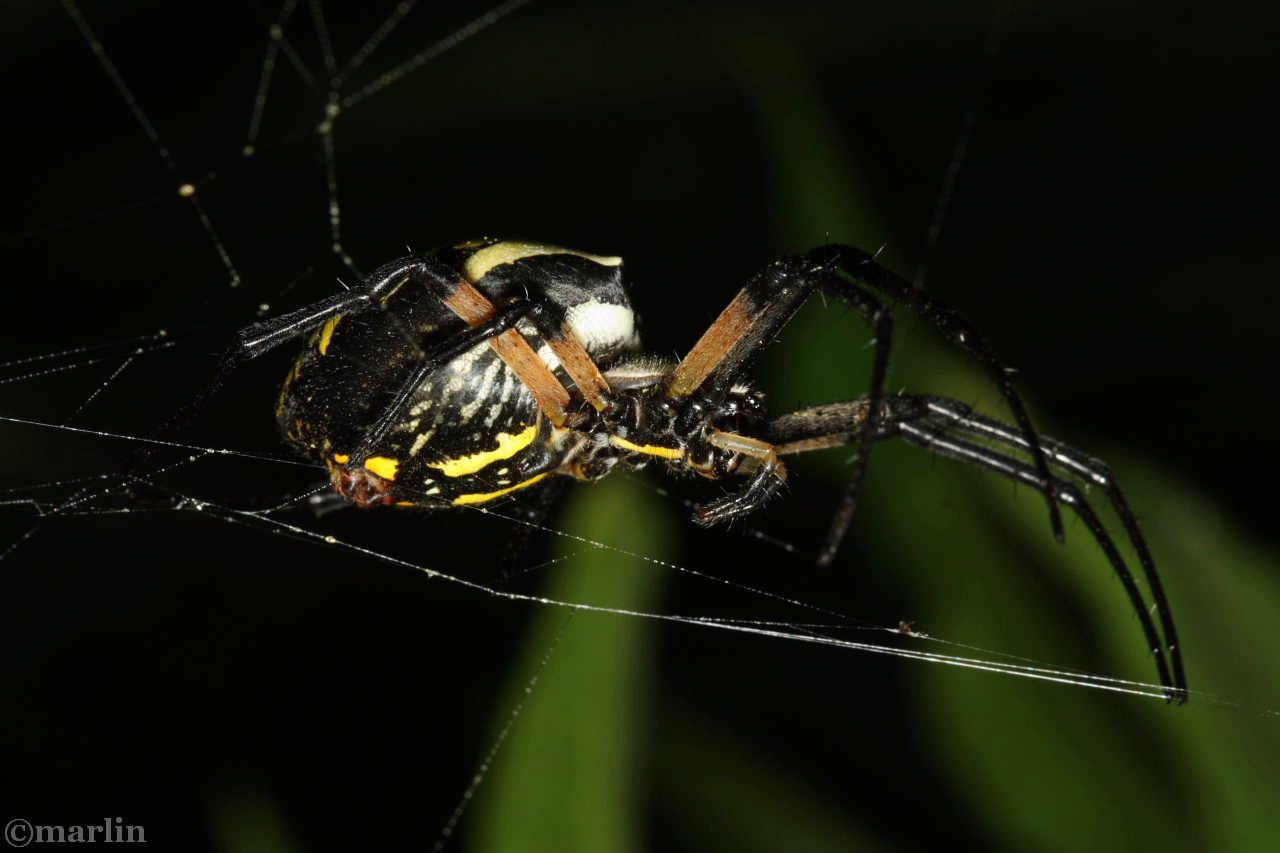 Argiope females lay eggs in egg sacs attached to low foliage. The eggs hatch in early summer, and the spiderlings disperse. Spiders grow in increments – being encased as they are inside a hard and rigid exoskeleton, they cannot grow unless they shed the old armor in a process called molting, much as snakes and other animals. The timing of the molt depends on many factors, including the ambient temperature, the amount of food and water available, even the length of the day. Only after the final molt does the spider become a sexually mature individual. [1] 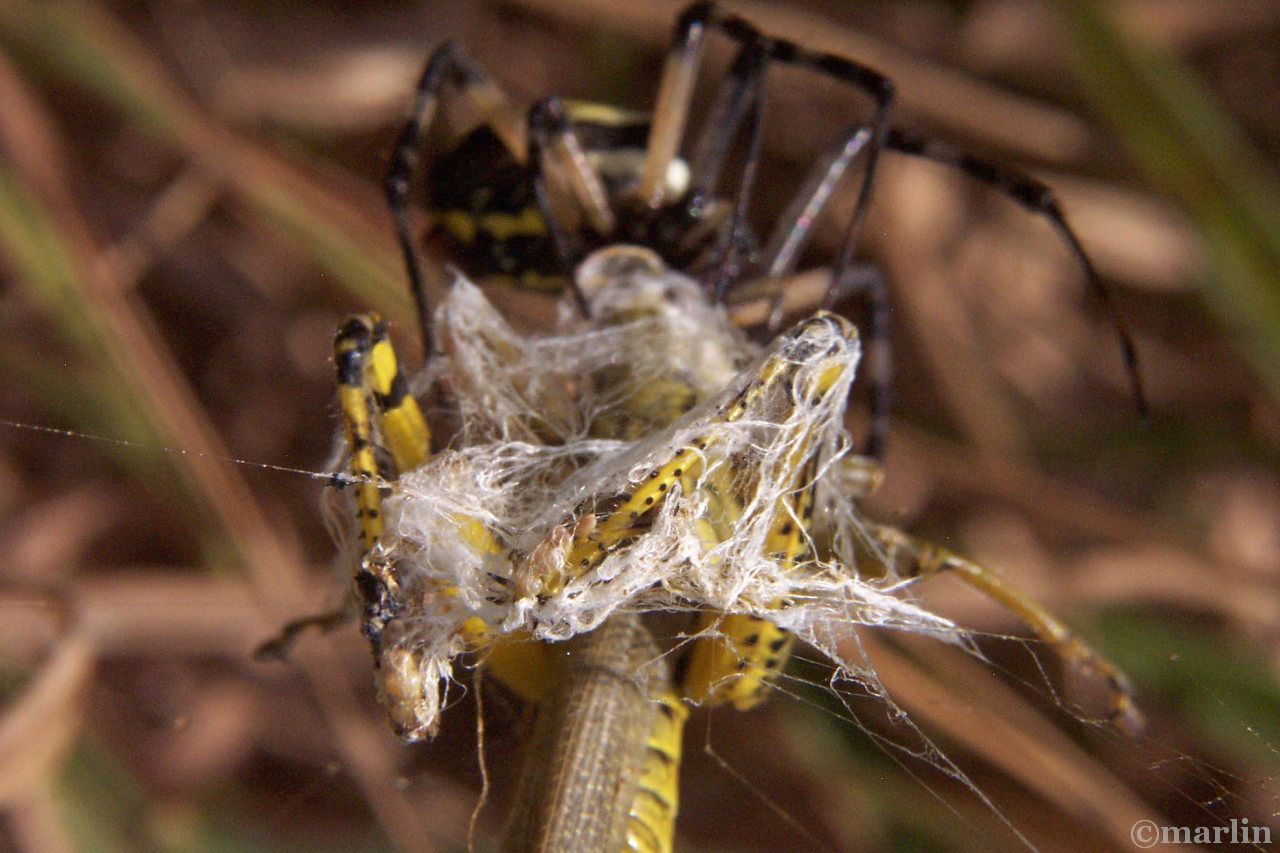 Call me crazy, but I thoroughly enjoy the gruesome spectacle of one of these majestic creatures capturing an insect in their large orb-web. I have been known to throw in a grasshopper or two just for grins. (A modest example above.) (Hey, you feed your dog, right?)

The large females sit head-downward in the center of their orb, unlike many of their kin, who sit hidden at the outside of the web, with a claw placed strategically on one of the highly-tensioned signal lines; when something disturbs the web, those spiders can sense the size and nature of the creature causing the disturbance without revealing themselves.

Not so with our gal Argiope (pronounced “are-JY-oh-pee”). She sits right out in the open. However, her cryptic camouflage makes her maddeningly invisible – so invisible, in fact, that they have taken to adding heavy, zig-zag silk to the web, so-called “stabilimenta” (it was once thought these structures added stability to the web) in order to prevent birds and other large creatures (men) from blundering into it and destroying the very metabolically expensive household.

In any event, the spider will rush to the prey and quickly throw silk over it to pin its appendages and reduce the chances of herself being bitten or stung; she then bites the prey in order to quickly paralyze it, and continues to wrap the now completely immobile and helpless creature, to be eaten later. Frequently you will see a few of these coccooned insects hanging around – fresh food whenever she wants a snack or a meal. No refrigeration needed!

Tree Encyclopedia / North American Insects & Spiders is dedicated to providing scientific and educational resources for our users through use of large images and macro photographs of flora and fauna – unmanipulated in their natural habitat.