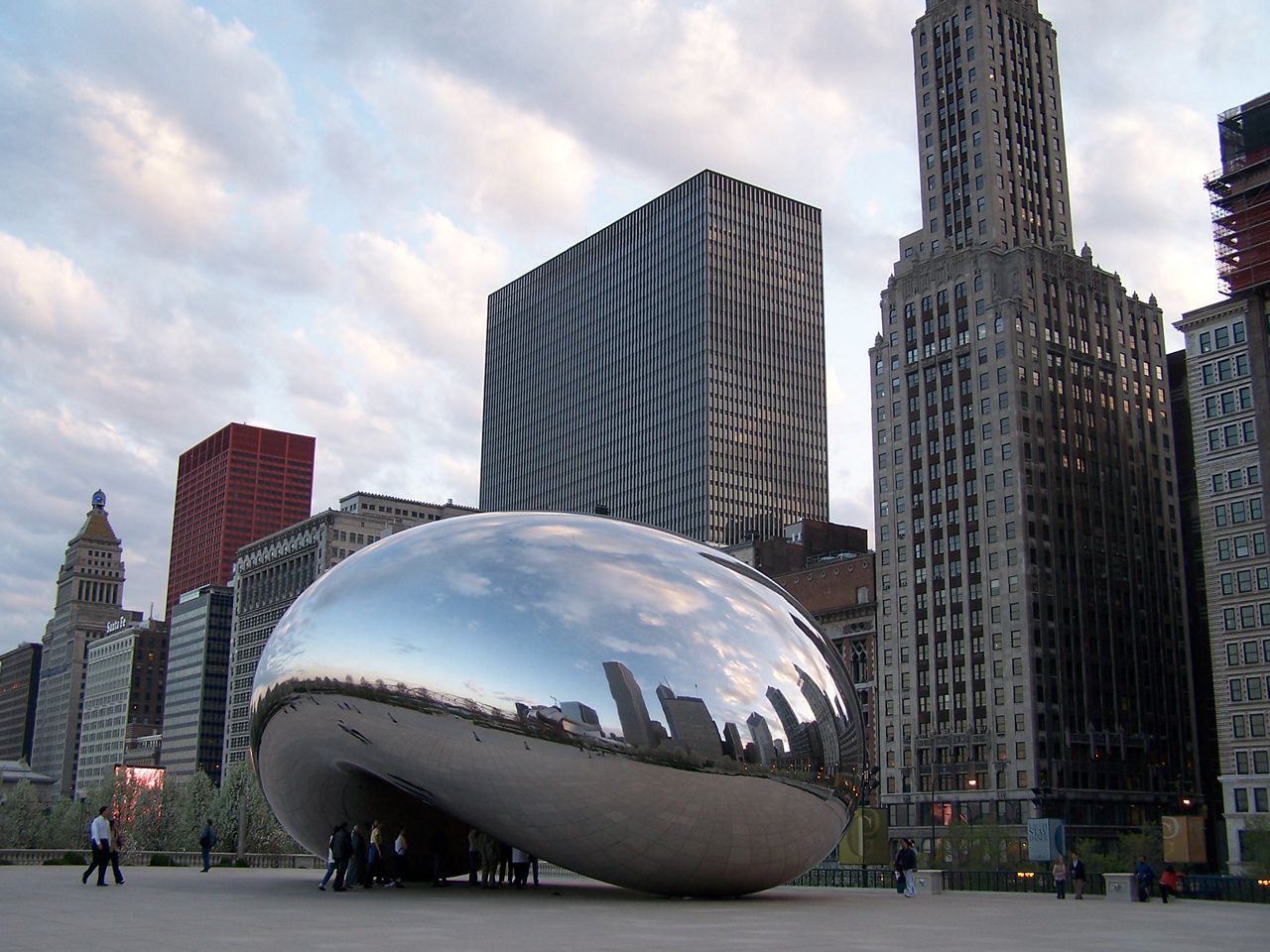 The 110-ton sculpture is forged of a seamless series of highly polished stainless steel plates, reflecting the city’s famous skyline and the clouds above. it features a 12-foot-high, arched “gate” to the concave chamber beneath the artwork, inviting visitors to touch its mirrored surface and see their image reflected back from a variety of (often hilariously distorted) perspectives. Cloud Gate is British artist Anish Kapoor’s first public outdoor work installed in the United States.

The sculpture was completed on August 28, 2005, and officially unveiled on May 15, 2006. Chicagoans immediately dubbed it “The Bean” and the official name was relegated to relative obscurity.  The Bean is a unique experience and has become a focal point of Chicago’s lakefront parks. The copyright for the sculpture resides with the artist, Anish Kapoor. 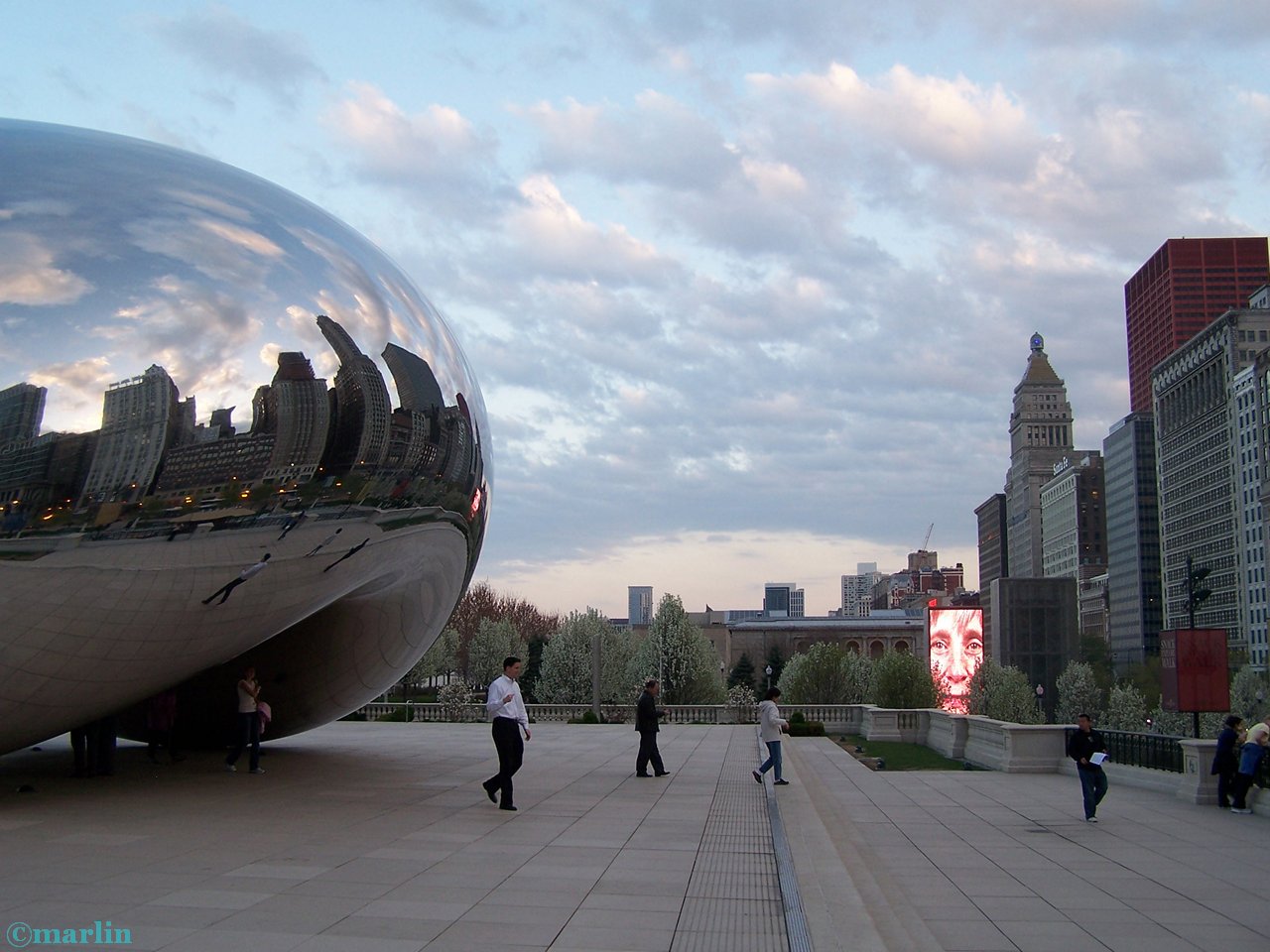 Inspired by the liquid metal mercury (also known as quicksilver), the sculpture is among the largest of its kind in the world, measuring 66-feet long by 33-feet high. Cloud Gate sits upon the (corporate name) Plaza, which was made possible by a gift from (corporate name).

The sculptor said, “What I wanted to do in Millennium Park is make something that would engage the Chicago skyline…so that one will see the clouds kind of floating in, with those very tall buildings reflected in the work. And then, since it is in the form of a gate, the participant, the viewer, will be able to enter into this very deep chamber that does, in a way, the same thing to one’s reflection as the exterior of the piece is doing to the reflection of the city around.” 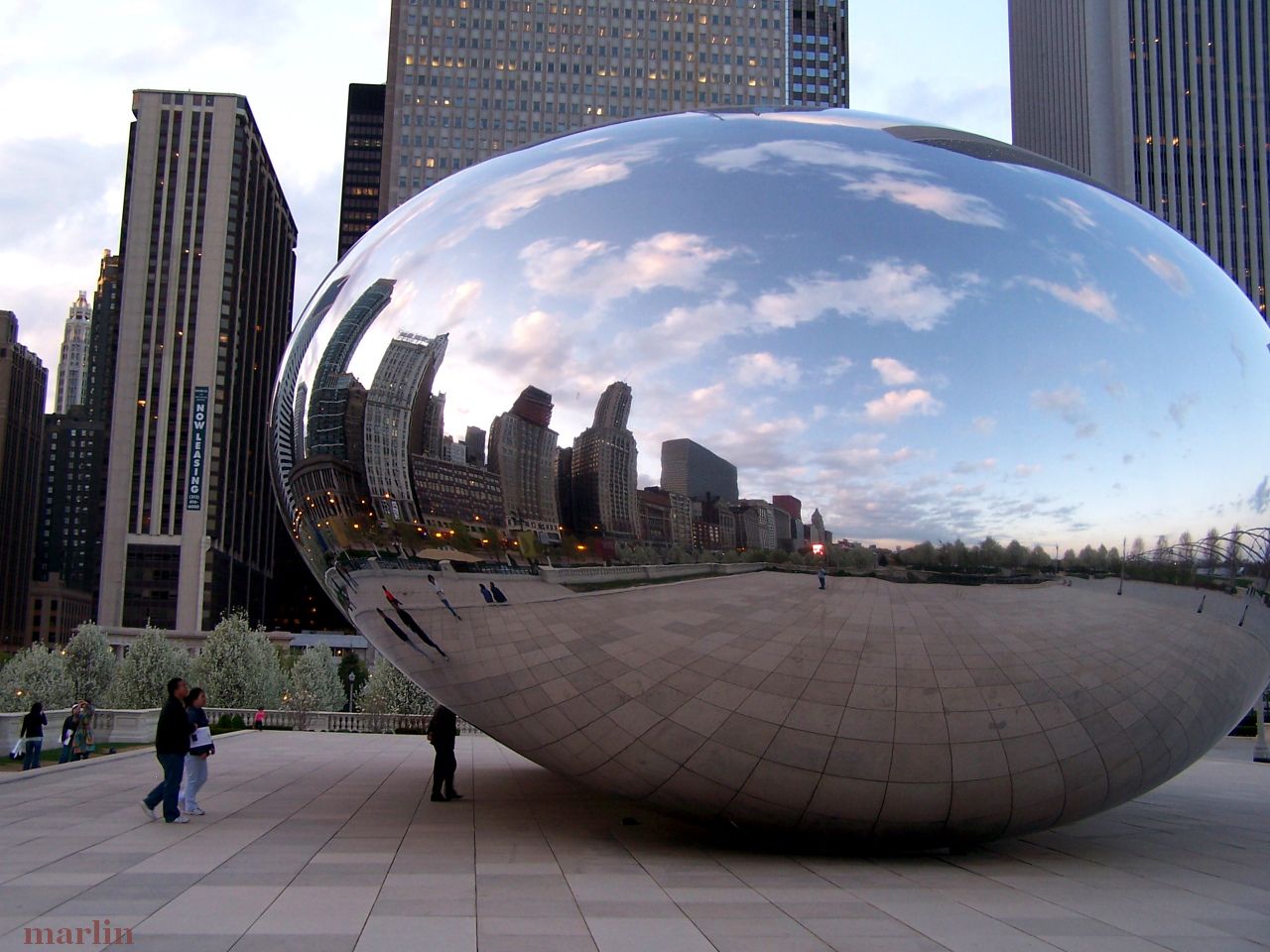 Anish Kapoor is renowned for his enigmatic sculptural forms that permeate physical and psychological space. Kapoor’s inventiveness and versatility have resulted in works ranging from powdered pigment sculptures and site-specific interventions on wall or floor, to gigantic installations both in and outdoors. Throughout, he has explored what he sees as deep-rooted metaphysical polarities: presence and absence, being and non-being, place and non-place and the solid and the intangible.

Kapoor was born in Bombay in 1954, and has lived in London since the early 1970s where he began his distinguished career as a student at Hornsey College of Art and Chelsea School of Art. Over the last 20 years, Kapoor has emerged as one of the most prolific and respected sculptors in the world. 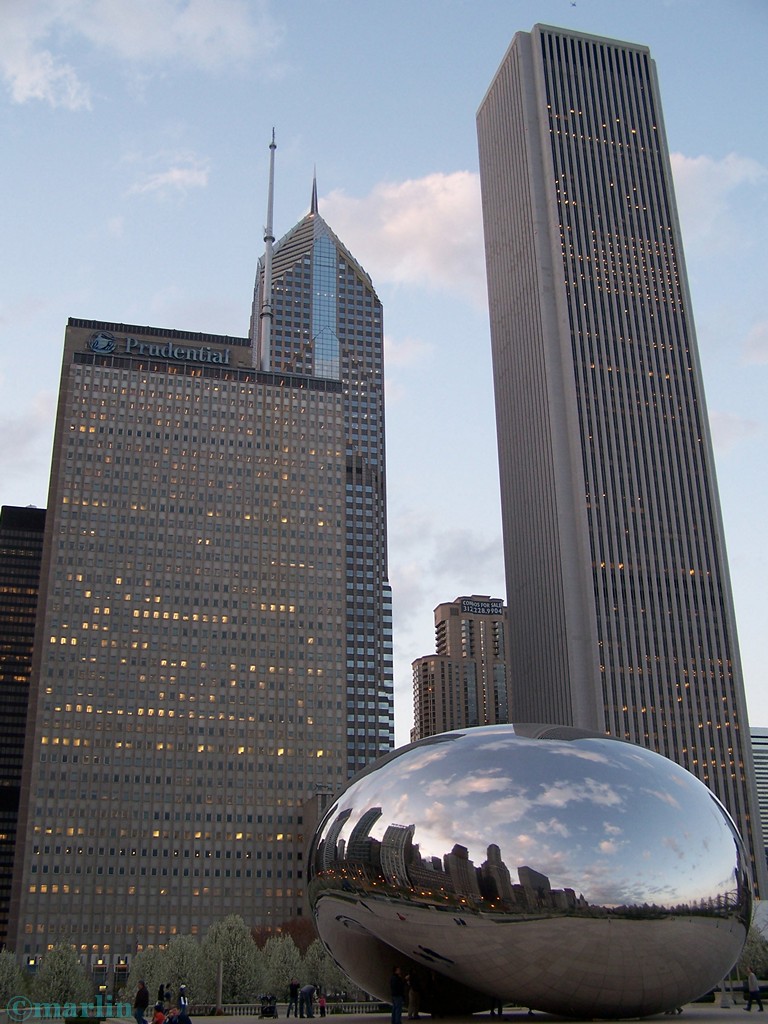 When I was a child in the early 1960s, the Prudential Building, at 41 stories, was the tallest in Chicago. Only the statue of Ceres on The Chicago Board of Trade Building stood taller. Built in 1955, the building was the last to be connected to the old freight tunnel network under the city – the one that so famously flooded when workers accidentally punched a hole in its roof under the Chicago River in 1992.

As it stands, the Prudential Building is now known as One Prudential Plaza, and the building in the picture directly behind it (with the pointy top) is the 995-foot Two Prudential Plaza. I think you’ll agree the older building and its newer sister provide a stunning backdrop for the Cloud Gate sculpture. 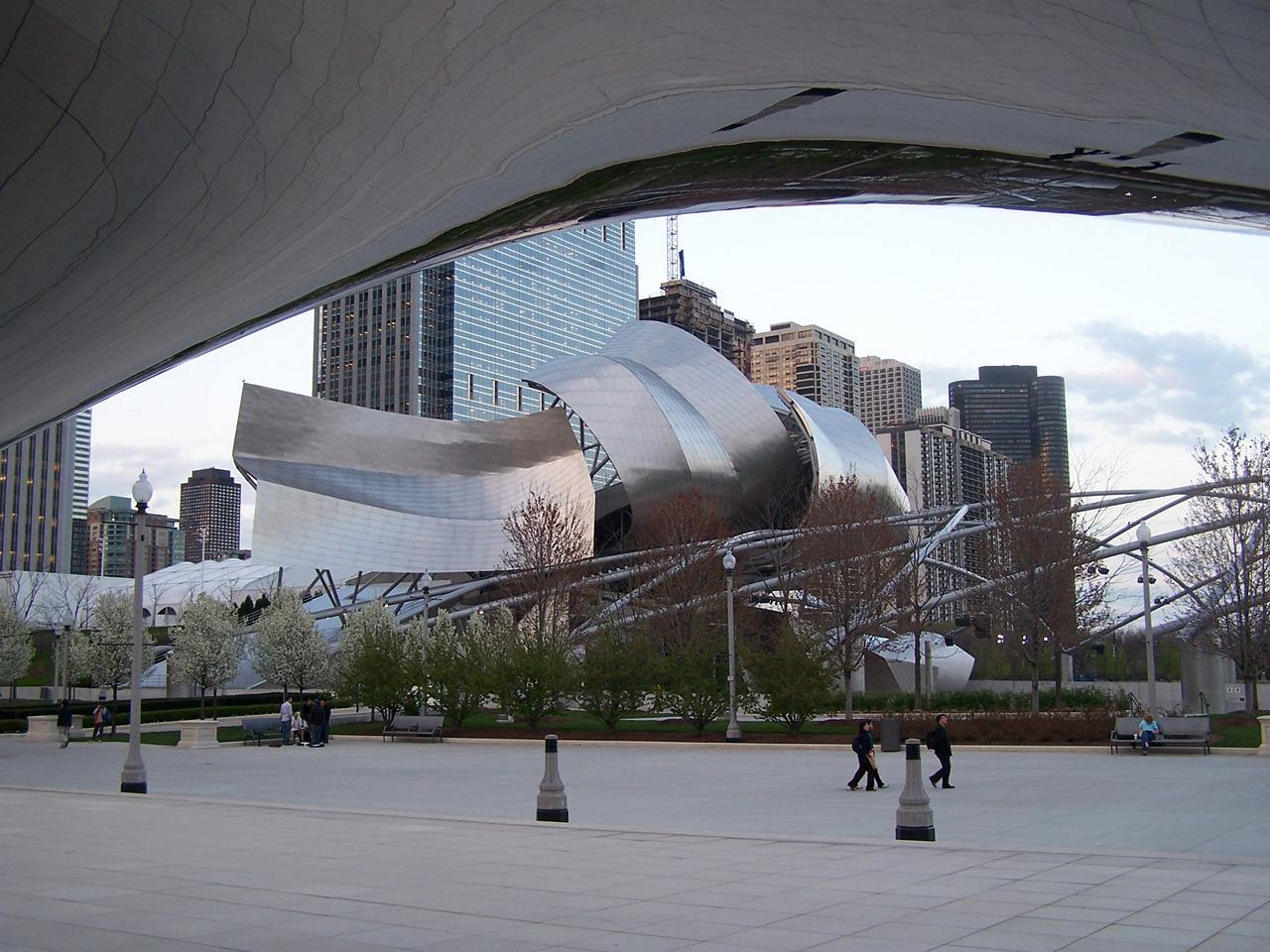 Anish Kapoor has had solo exhibitions of his work in venues such as Kunsthalle Basel, Tate Gallery and Hayward Gallery in London; Reina Sofia in Madrid and CAPC in Bordeaux. He has also participated internationally in many group shows at the Whitechapel Art Gallery, The Royal Academy and Serpentine Gallery in London; Documenta IX in Kassel; Moderna Museet in Stockholm; and, Jeu de Paume and Centre Georges Pompidou in Paris.

Public collections of Kapoor’s works are on view at a broad range of international cultural institutions, including the Hirshhorn Museum and Sculpture Garden in Washington, DC (U.S.); the Museo d’Arte Contemporanea in Prato (Italy); Musee St. Pierre, Lyon (France); and, the Art Gallery of New South Wales, Sydney (Australia).

Anish Kapoor was awarded the “Premio Duemila” at the Venice Biennale in 1990, the Turner Prize Award in 1991 and was awarded an Honorary Fellowship at the London Institute in 1997 and a CBE in 2003. He is represented by the Lisson Gallery, London, Barbara Gladstone Gallery, New York and Galleria Massimo Minini, Italy. It must be noted the copyright for the sculpture resides with the artist.