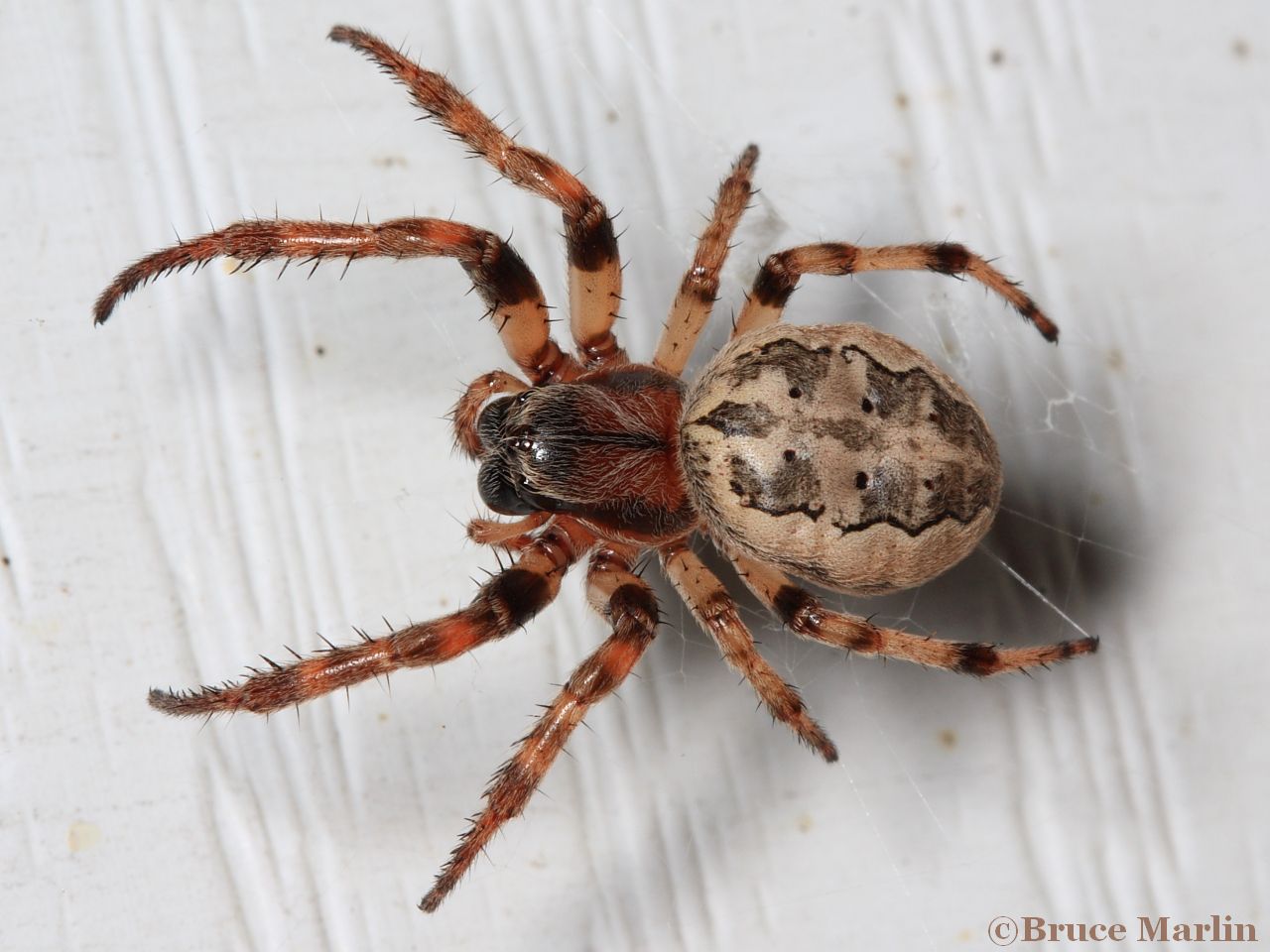 Also commonly called foliate spider, after its prominent folium, or pigmented design on the abdomen. Mature female (above) measures 12mm (about 1/2 inch), and the male below is 10mm. (Spiders are measured by body length.) Males spiders are almost always smaller and less prominently marked than females, and usually avoid contact with females unless mating. 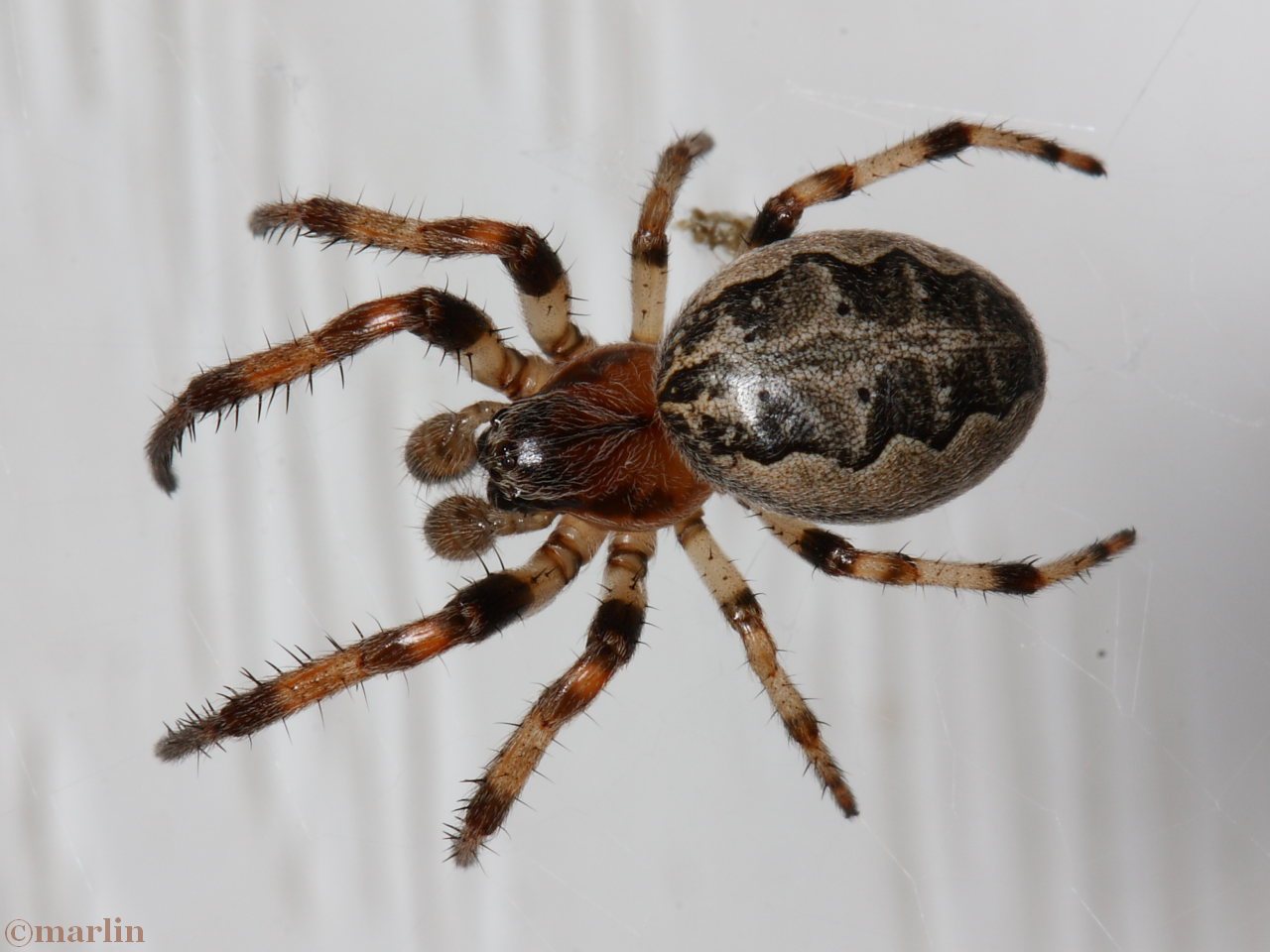 These spiders are very common on human structures, especially under eaves and porches. They live on my back porch by the dozens, males and females alike in their smallish-orb webs, built just an inch or two away from, and parallel to the wall. Unlike their larger sisters amongst the weeds, these beautiful little rascals are strictly nocturnal, hiding in crevices or in foliage retreats from dawn till dusk.

Like all spiders, the furrow is venomous. That is, they use venom to paralyze their prey. However, you’d have to work pretty hard to be bitten, and the amount of venom is so miniscule as to be much less dangerous than, say, a bee sting. Venom is costly to produce, metabolically speaking, and the spider is not about to waste it unless thoroughly provoked. I have been photographing spiders for nearly 40 years, and never been bitten. Ever. 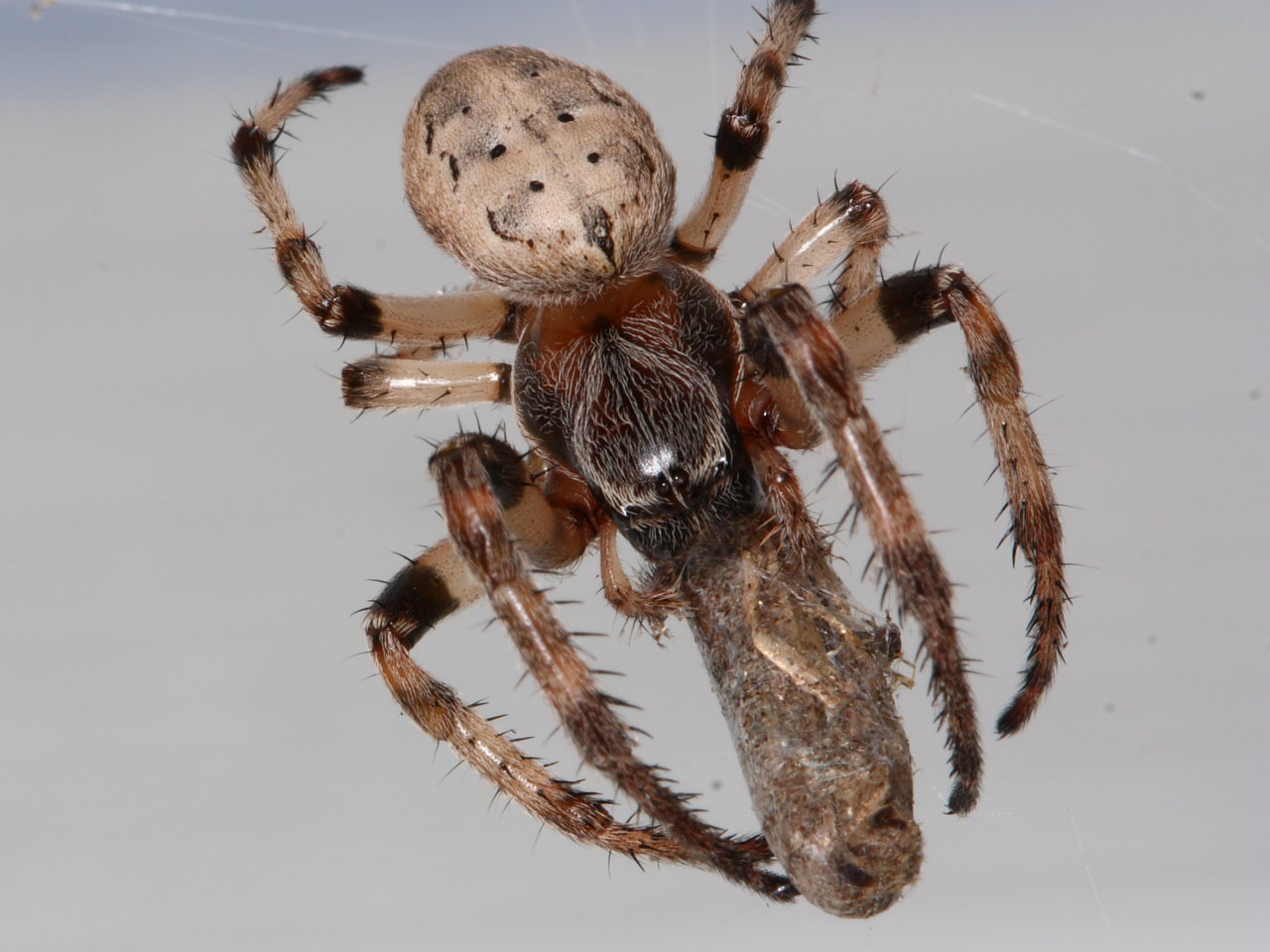 This gal has just finished wrapping a moth for a future meal. Orb weavers usually quickly bite their prey to subdue and paralyze them before they can escape the web. This strategy also protects the spider against stinging insects. After the victim become quiescent, the spider positions herself over the prey and begins spraying silk filaments from her spinnerets while spinning the carcase underneath. The Hobbit Frodo Baggins was victim of this grotesque procedure in his encounter with Shelob in Tolkein’s Lord of the Rings trilogy. 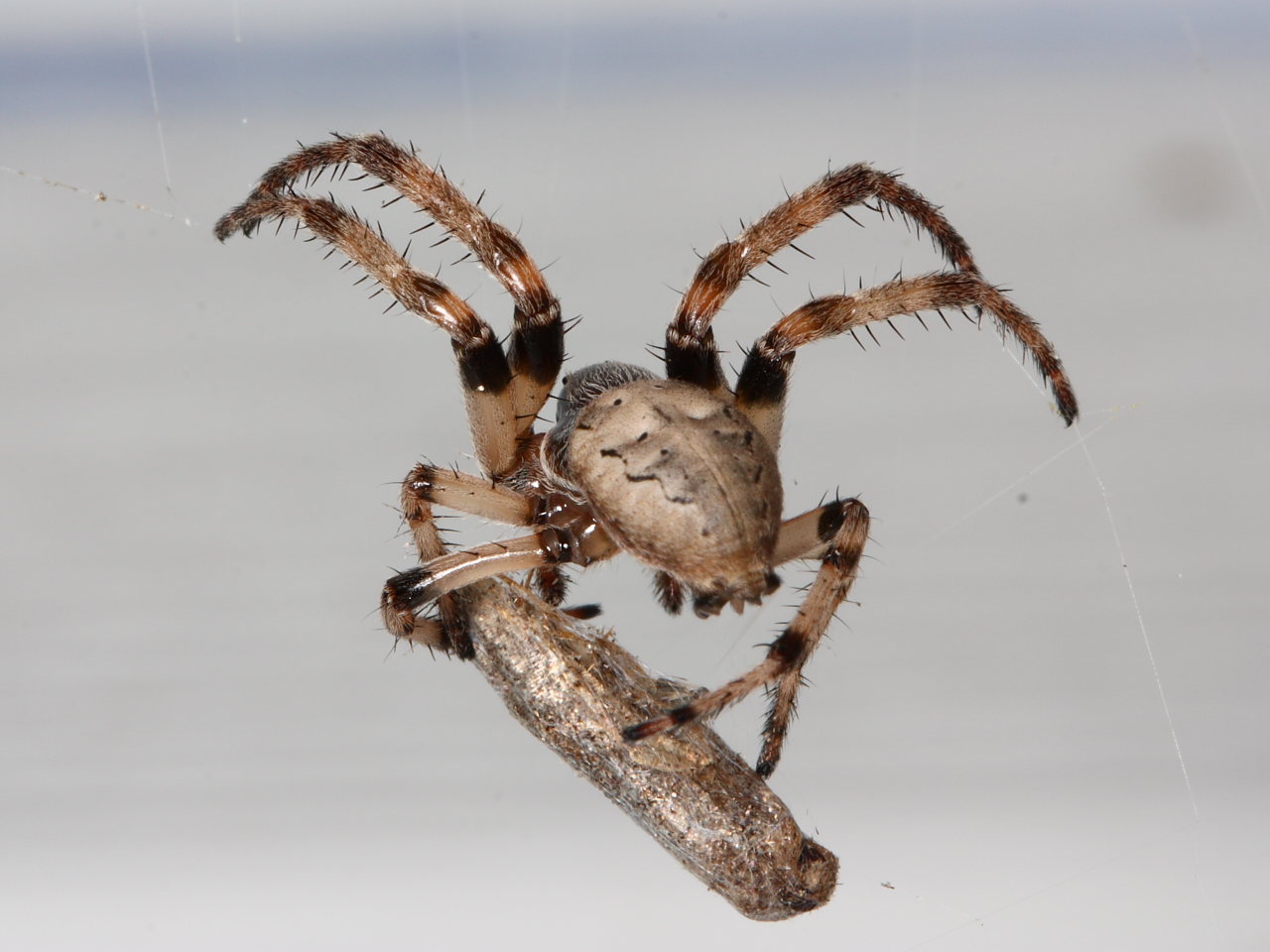 Orb weavers comprise a huge family of spiders, with 3500 species worldwide, 180 of which call North America home. These spiders vary greatly in color, shape and size, measuring between 2 – 30mm (1/16 — 1 1/4″) long. They have eight eyes arranged in two horizontal rows of four eyes each. Orb weaver males are generally much smaller than the females and commonly lack the showy coloring of their fairer sex, but that is not so with this species: the males are only slightly smaller, and have an equally gaudily-decorated abdomen. 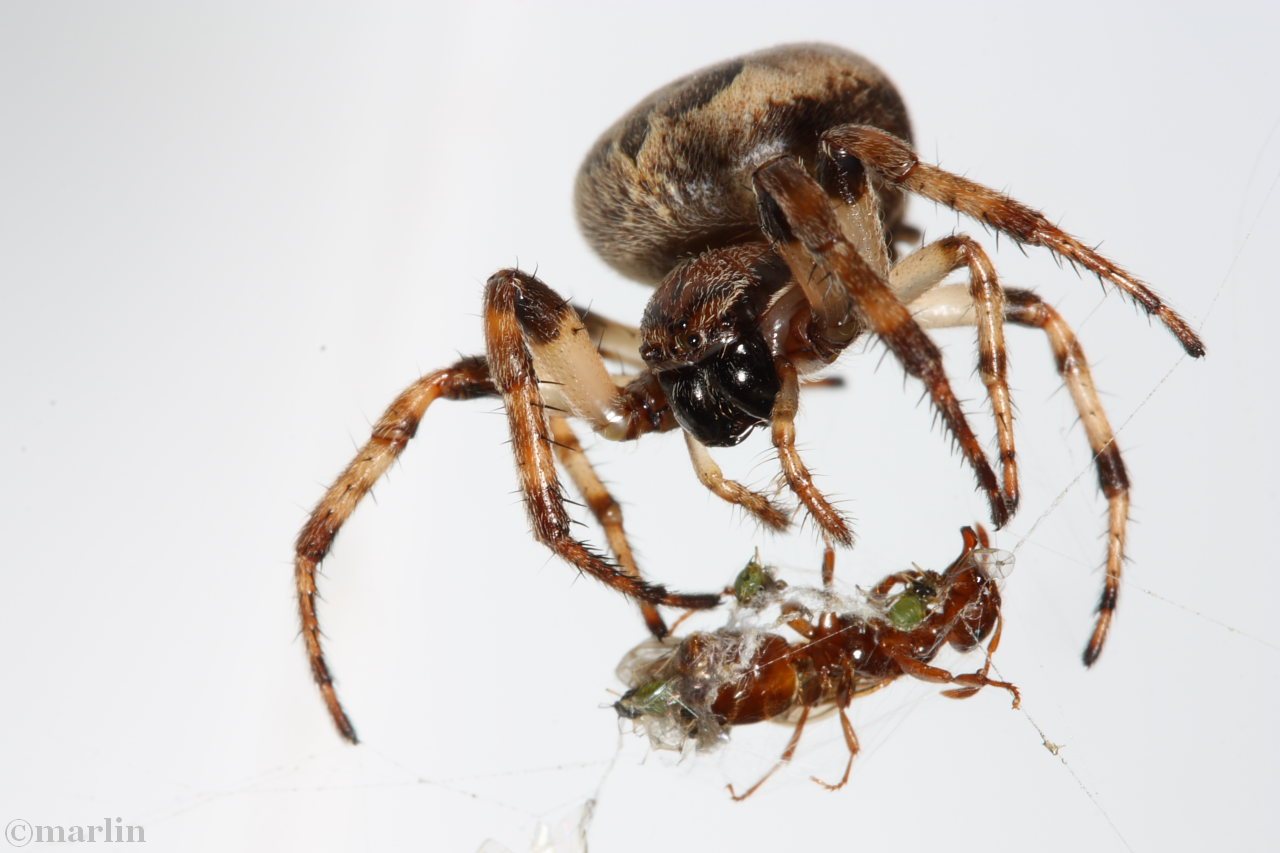 This large female was having a field day catching queen ants from a nearby swarm. Rich pickings, indeed – she doesn’t even have to wrap them; one bite and it’s suspended animation for you, honey, and until I get around to eating you, just make yourself comfortable! And what a nice load of protein in one of those royals: all that DNA and all the makings for millions of eggs, wrapped in a nice chitinous shell just like the burritos you get from Taco Bell at 3 o’clock in the morning. Lady spiders (can I say that?) need protein for manufacturing silk and for egg-building.

Ants here in northern Illinois usually swarm 2-3 days after a heavy rain, especially if it’s been dry for awhile. If you pay attention and find a swarm where queens and drones are flying and mating, take a look around and see who else has noticed – dragonflies will ply their trade as well, plucking the lumbering beasts out of thin air and devouring them on the fly. I’ve seen swarms where there are hundreds of queens in the air in a very small area, and dozens of green darner dragonflies darting through the cloud like Spitfires on Heinkel HE 111’s in WWII. 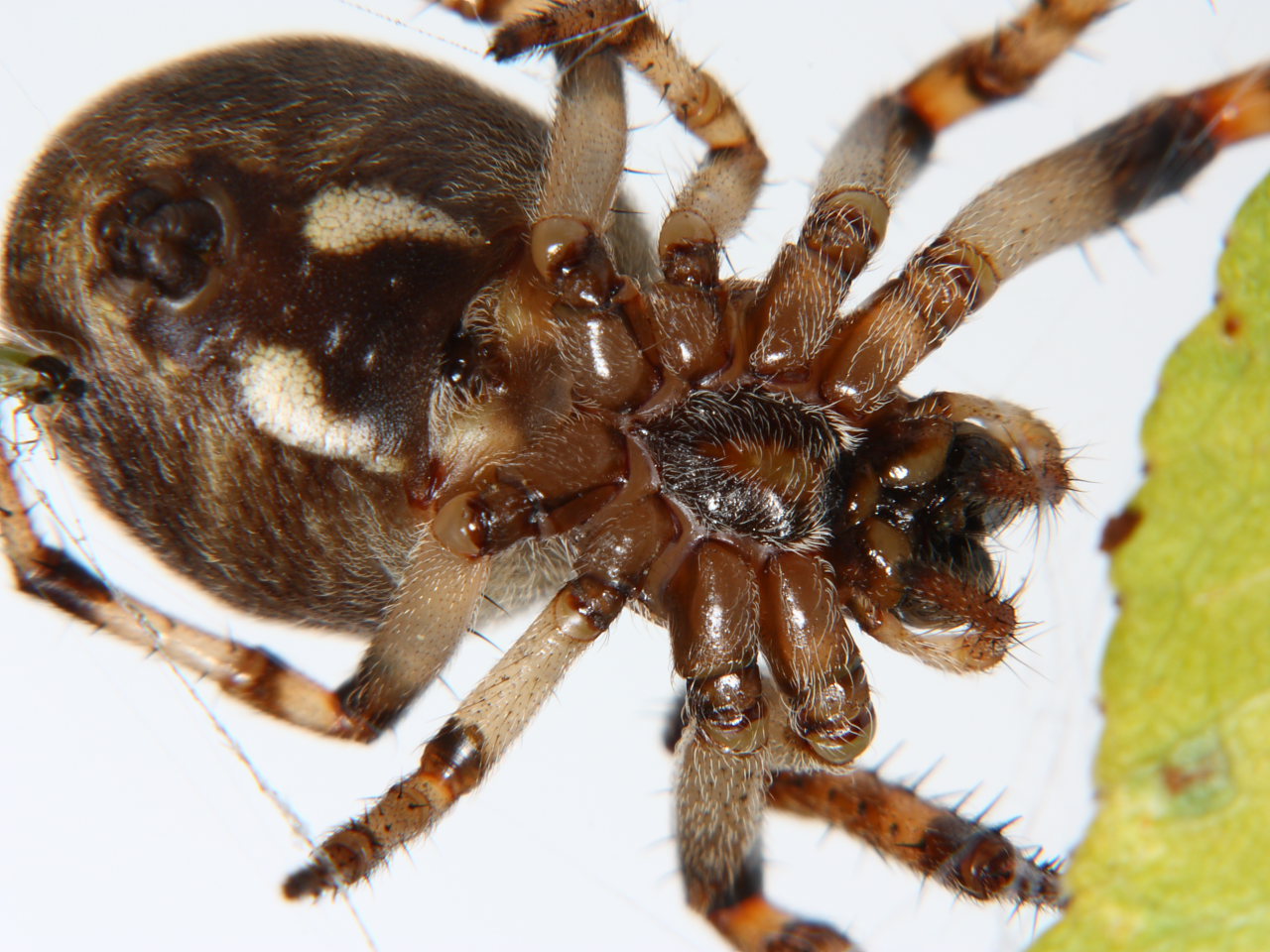 This close-up ventral view of a female spider is enough to give anyone the heebie-jeebies. It is the stuff of which arachnophobic nightmares are made. Cheers!

Tree Encyclopedia / North American Insects & Spiders is dedicated to providing scientific and educational resources for our users through use of large images and macro photographs of flora and fauna: Unmanipulated and in their natural habitat.