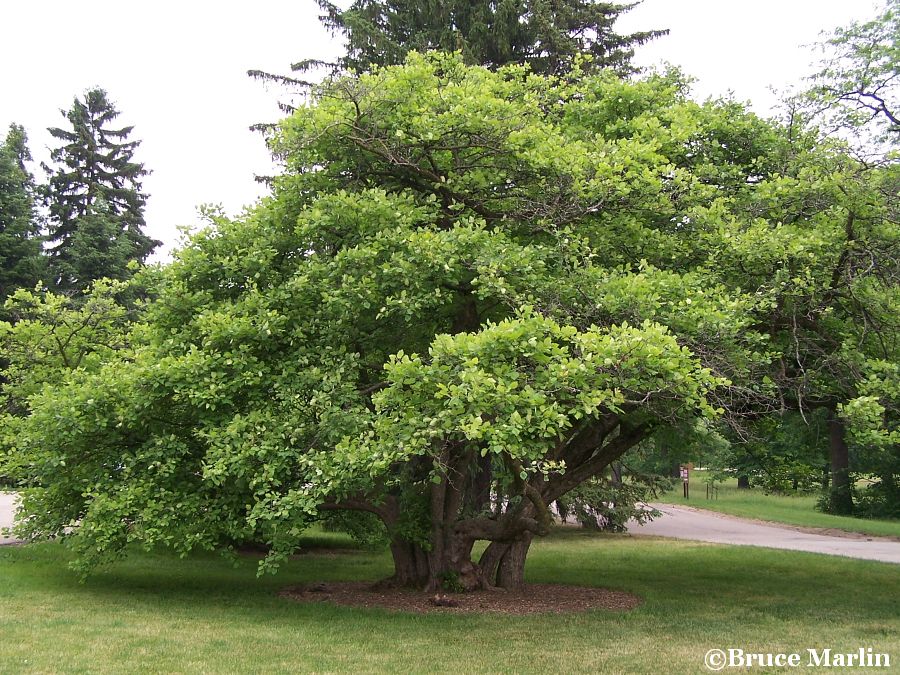 Downy Hawthorn – Crataegus mollis. This tree is over 100 years old.

Downy hawthorn is native to eastern North America, where it grows in bottomlands, Oak savanna and prairie edges. As you can see by this venerable specimen at the Morton Arboretum, this tree has a dense, spreading crown and can take on a muti-trunked, twisted form.

Flat clusters of small, creamy white flowers in spring; flowers have an unpleasant scent; bright red fruit late summer and early autumn; spring foliage is very downy; fall color is yellow to bronze. Does well in full sun; moist, well-drained soil, but tolerant of drought; pH adaptable. This species has fewer thorns than Cockspur Hawthorn, and is sometimes planted as an ornamental for the large white flowers in the spring and crimson fruit in the fall.

Hawthorns are subject to many of the same disease as other trees in the rose family: fire blight, mildew, and rust being the chief culprits. However, this species is a tough organism;  time-tested in the harsh, cold climate of Canada to the dry, scorching summers of Texas. Rarely found in cultivation as other nearly equally hardy varieties with more prolific flowers and fruit (some sans thorns) are available.

Hawthorn wood is dense and rot-resistant, and was used for fenceposts and other applications where a moist environment would be encountered. Hawthorn trees are noted as having magical properties in many Neolithic and medieval cultures. Superstitious people today still cling to a belief in faeries and other supernatural beings said to live in close association with the genus (see Wikipedia ‘Crateagus’ ).

Family Rosaceae – Rose Family; Fruit Trees
Containing Hawthorns, Apples, Pears, Cherries, Plums, Peach, Almond, Mountain-Ash and Whitebeam. Rosaceae is a large family of plants with about 3,000 species in ~100 genera. Crabapple and other fruit trees provide some of our most outstanding flowering ornamentals, as well as food for birds and other wildlife.
Tree Encyclopedia | Tree Index | Fruit Tree Index