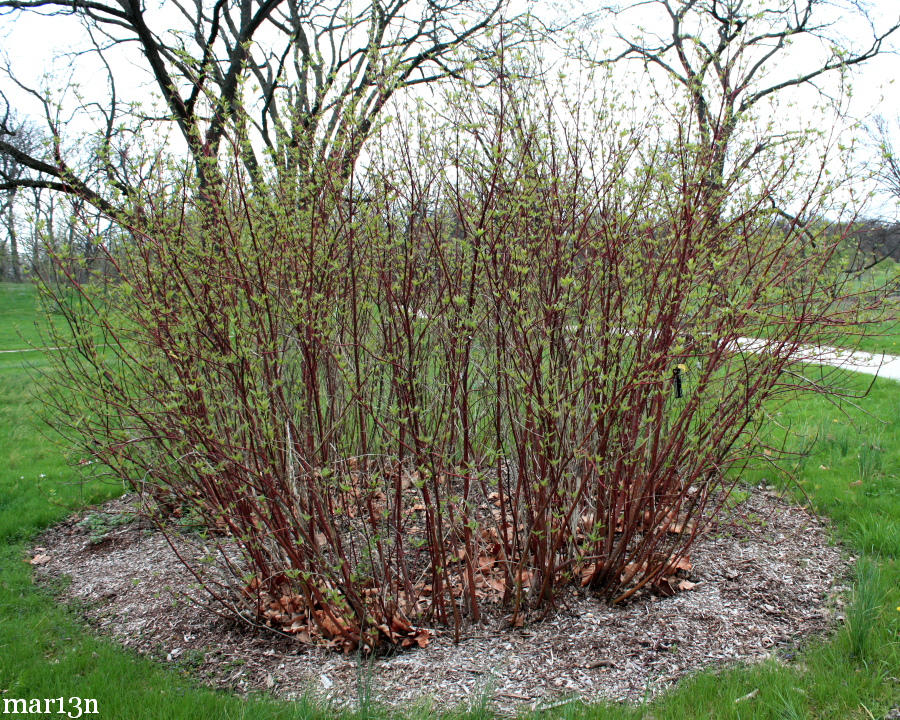 Red-osier dogwood is a woody deciduous shrub generally 1.4-6 m (4.6-20 ft) tall. The bark and twigs are reddish to purple and fairly smooth from autumn to late spring; after the leaves have fallen, the deep burgundy branches add color to the winter landscape. The bark, twigs, and leaves are bright green in spring through summer. The simple, opposite leaves are 5-10 cm (2-4 in) long, dark green above and hairy and lighter-colored below, with smooth margins, rounded bases, pointed tips, and falsely parallel veins. Flowering occurs from June to August. The inflorescence is a cyme, with 2-3 mm (0.08-0.12 in) white to cream-colored flowers. The white berries are smooth on the faces, furrowed on the sides.

Red osier dogwood is a quintissential North American native, inhabiting wetlands and other moist soils in dense thickets from Alaska to Newfoundland, south to California, Illinois, and West Virginia [2]. Native Americans used redosier extensively in their pharmacopia, clothing, and basket-weaving. The Ojibwa and the Chippewa used redosier dogwood bark as a dye. The inner bark was mixed with other plants or minerals and used to make a red dye, a light red dye, a black dye, and an ecru or â€œkhakiâ€ colored dye. [3].

Native Americans smoke the inner bark of redosier dogwood in tobacco mixtures used in the sacred pipe ceremony. Dreamcatchers, originating with the Potawotami, are made with the stems of the sacred redosier dogwood. Some tribes ate the white, sour berries, while others used the branches for arrow-making, stakes, or other tools [3].

Redosier dogwood loves soils that are saturated for at least a portion of the growing season. It is common on the edges of lakes, ponds, within wetlands, and along streams. Not as tolerant of long-term root saturation as are some other shrubs, dogwood seems to prefer wetland margins where soils are nitrogen-rich, saturated, and shallowly inundated in the spring, and may be completely dry by late summer. It is tolerant of fluctuating water tables [3].

Popular as an ornamental shrub, primarily because of its winter interest. An extremely hardy and adaptable plant, it can be grown in wet areas including intermittent standing water. Small white flowers in early spring are followed by light green foliage which flutters in the wind and turns an attractive honey-gold in autumn [2].

Plants can be pruned in early spring to produce dense thickets attractive to birds and other wildlife, or left untamed in which case it can grow to 15 feet, providing an excellent screen.

The fleshy fruits of dogwoods are very valuable to wildlife, particularly in the Northeast. The fruit ripens in late summer, and besides being available through the fall, some of the berries may persist on the plants into the winter months.