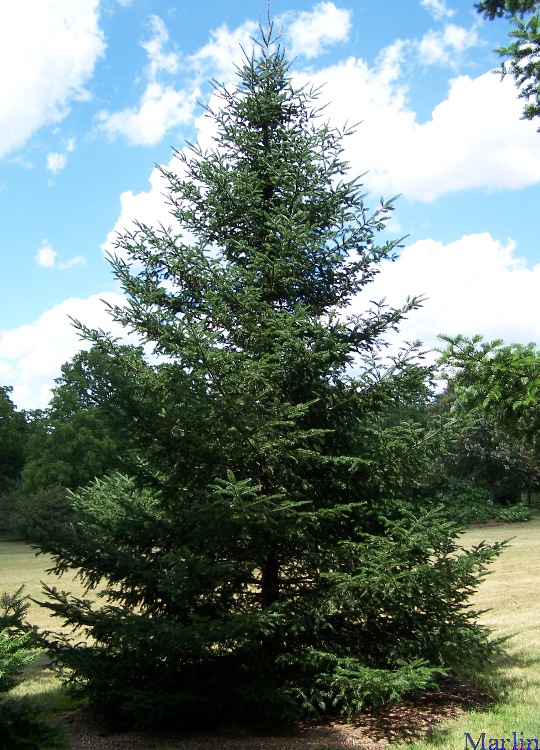 This balsam fir, grown from seed, is a 57-year-old Morton Arboretum specimen [2]. 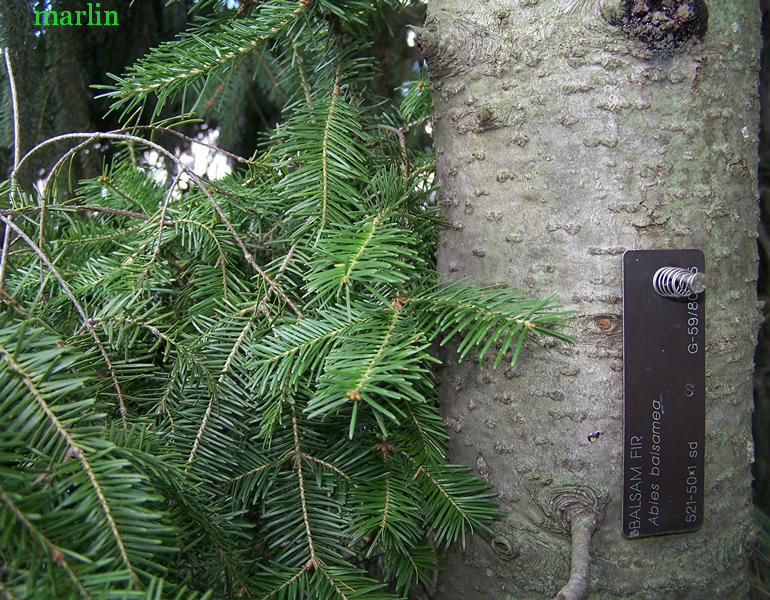 Balsam fir is a popular Christmas tree in the East and grown on plantations for this purpose.  The branches are used to make Christmas wreaths.

Balsam fir is native to North America, a coniferous evergreen tree.  At maturity it may reach a height of 40 to 90 feet (12-27 m) and a d.b.h. of 12 to 30 inches (30-75 cm).  Maximum age is about 200 years.  Balsam fir has a dense, narrowly pyrimidal crown terminating in a slender, spirelike top.  Open-grown trees may have live branches extending to the ground, but trees in well-stocked stands have dead, persistent lower branches.  The needles are flat, resinous, and 0.4 to 1.2 inches (1-3 cm) long.  Erect cones occur on the upper side of 1-year-old branches in the upper crown.  The bark is gray and smooth and contains numerous raised resin blisters.  On older trees the bark becomes brown and scaly.

Balsam fir wood is used primarily for pulpwood and lumber for light frame construction.  It is also used extensively for cabin logs.  The wood is lightweight, relatively soft, low in shock resistance, and has good splitting resistance.  Balsam fir is not well suited for use as posts and poles because it decays rapidly.  Minor wood products include paneling, crates, and other products not requiring high structural strength.

Spruce and ruffed grouse feed on balsam fir needles, tips, and buds, which often make up 5 to 10 percent of the fall and winter diet.  Red squirrels feed on balsam fir male flower buds, and less frequently on leader and lateral buds in late winter and spring when other foods are scarce.  Stands attacked by the spruce budworm attract numerous insect-eating birds, especially warblers and woodpeckers.