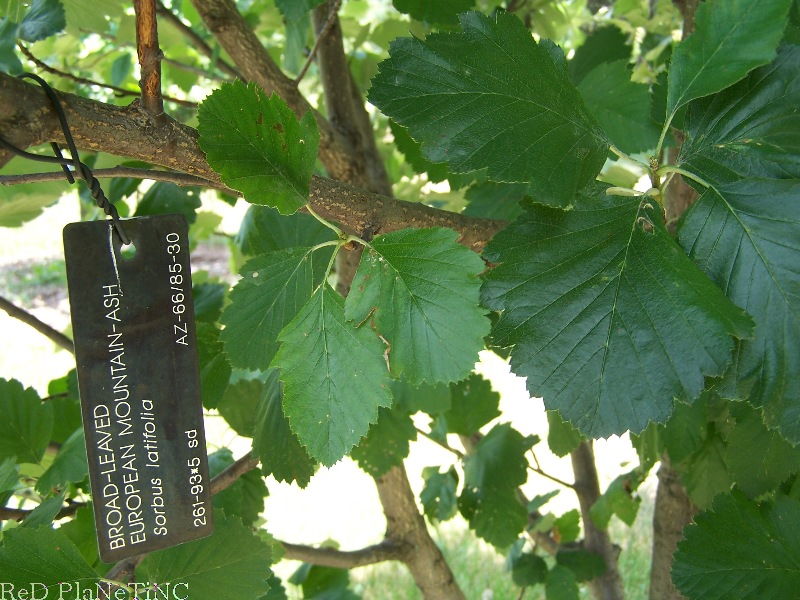 Sorbus latifolia is hybrid S. torminalis x S. aria which breeds true from seed. It was at one time thought to be a variety of Swedish Whitebeam (Sorbus intermedia), by authors A. P. de Candolle and J. C. Loudon. Synonyms include Crataegus latifolia, Pyrus decipiens, Pyrus rotundifolia, Sorbus bristoliensis, and Sorbus devoniensis [1].

Occasionally planted as an ornamental in North America, the tree originated in the area around Fontainbleau, France. It has been popular in the European landscape and garden tradition since the mid-18th century [2]. 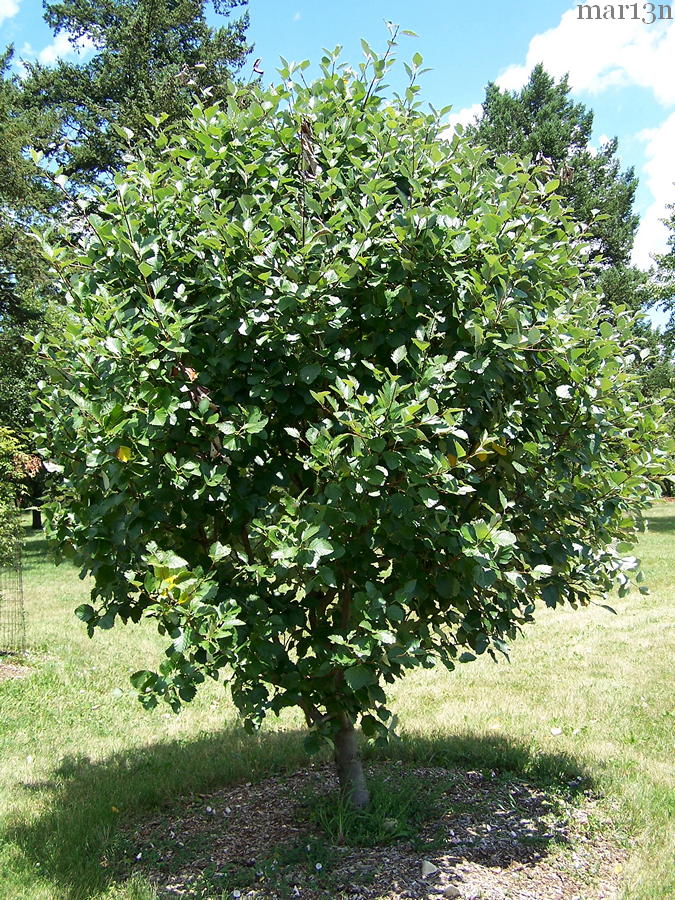 This “Service tree of Fontainbleau” is 12 years old

These plants have pinnate leaves, giving them a fern-like appearance; the foliage turns shades of red and yellow in autumn. In the spring, they produce clusters of cream-colored flowers, which are followed by bunches of attractive berries that are usually brilliant red, but may be white, pink, orange, or yellow. (1)

The showy white flowers appear in early summer, and the abundant orange fruit appear in summer, persisting through winter. Fruit provides palatable browse for many animals and birds, but is not suitable for human consumption, except, perhaps for various folk remedies; the plant is not toxic.(2)

“Mountain ash, 1804, from rowan-tree, rountree (1548), northern English and Scottish, from a Scandinavian source (cf. O.N. reynir, Swed. Ronn “the rowan”), ultimately from the root red, in reference to the berries. The rowan was the tree most often credited with protective magical powers against all effects of witchcraft, not merely in Celtic areas but throughout Britain.” — Oxford Dictionary of English Folklore

Family Rosaceae – Rose Family; Fruit Trees
Many of these plants are of vital economic importance, the fruit of which contain vitamins, acids, and sugars and can be used both raw and for making preserves, jam, jelly, candy, wine, brandy, cider and other beverages. Tree Encyclopedia | Tree Index | Fruit Tree Index