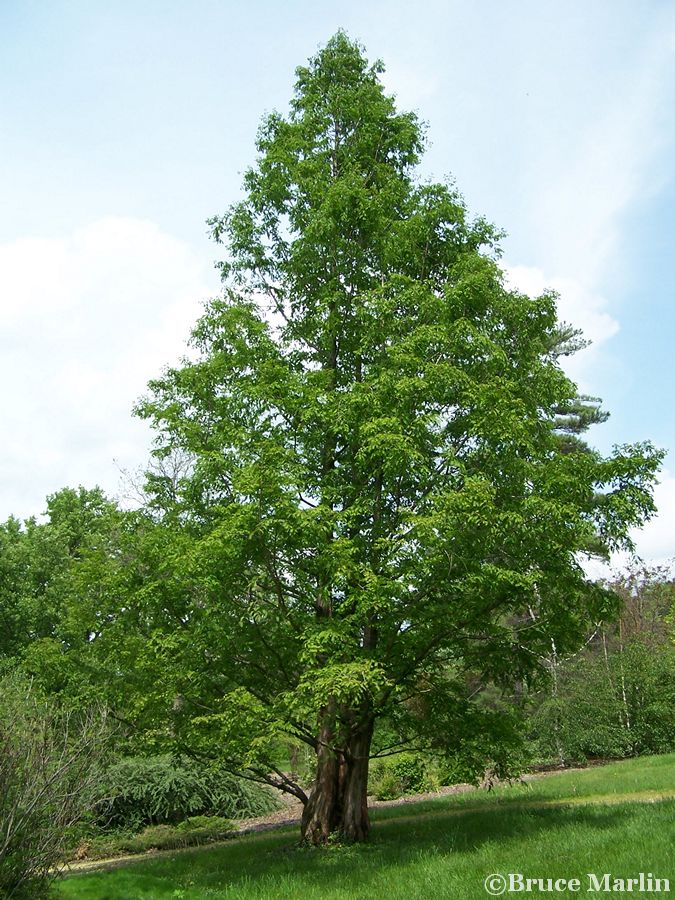 Dawn Redwood is a fast-growing tree in the Cypress family native to the Sichuan-Hubei region of China. It is the only living species in the ancient redwood genus Metasequoia, but three fossil species are known. Metasequoia, along with Sequoia, Sequoiadendron and several other genera, were reclassified from the Taxodiaceae family to Cupressaceae after DNA analysis became possible.

While the bark and foliage are similar to the closely related redwood genus Sequoia, Metasequoia differs from the California redwood in that it is deciduous. The leaves are opposite, 1-3 cm long, and bright fresh green, turning a foxy red-brown in fall. The cones are globose to ovoid, 1.5-2.5 cm in diameter with 16-28 scales, arranged in opposite pairs in four rows, each pair at right angles to the adjacent pair; they mature in about 8-9 months after pollination. The pollen cones are 5-6 mm long, produced on long spikes in early spring; they are only produced on trees growing in regions with hot summers.

Leaves: Fine and feathery in appearance, opposite in arrangement, flattened and about 1/2 inch long and 1/16 inch wide. Bright green above with a narrowly grooved mid vein. Easily confused with a Bald Cypress, but look on the latter for the leaves to be spirally arranged on the branchlets.

Flower Color: Not showy, male flowers up to 12 inches long.  Bloom Time: April to May. Fruit Description: The fruit is elongated, round 1/2 inch to 1 inch, and brown. Cones hang down on long stalks.

Metasequoia first showed up as fossils in the Mesozoic Era, (245-265 mya) and in 1944 a small stand of an unidentified tree was discovered in China in Modaoxi by Zhan Wang. These were not studied further until 1946 and only finally described as a new living species of Metasequoia in 1948 by Wan Chun Cheng and Hu Hsen Hsu. In 1948, the Arnold Arboretum of Harvard University sent an expedition to collect seeds and, soon after, seedling trees were distributed to various universities and arboreta worldwide for growth trials.

In the late 1980s, it was discovered that many of the second generation trees in cultivation suffered from inbreeding depression (extremely low genetic variability) which could lead to increased susceptibility to disease and reproductive failure. This was because most of the trees were grown from seeds and cuttings derived from as few as three trees that the Arnold Arboretum had used as its source. More widespread seed-collecting expeditions in China in the 1990s sought to resolve this problem and restore genetic diversity to cultivated Metasequoia.

Metasequoia has proved an easy tree to grow in temperate regions, and is now widely planted as an ornamental tree. Planted specimens have already reached 25-40 m in height and 1-1.3 m in diameter, despite being in cultivation for under 60 years. This rapid rate of growth has led to consideration for using the tree in forestry plantations. It has been discovered that Metasequoia will thrive in standing water, much like the baldcypress, and if left branched to the ground in full sun, will develop the large, contorted boles that have made it famous. –From Wikipedia Metasequoia

Family Cupressaceae – Redwood, Cypress, Arborvitae, Juniper
There are thirty (many monotypic) genera and 142 species in the family Cupressaceae, now widely regarded as including the Taxodiaceae, previously treated as a family. The Cupressaceae are found in the fossil record as far back as the Jurassic Period, about 210 million years ago.
Tree Encyclopedia | Trees Index