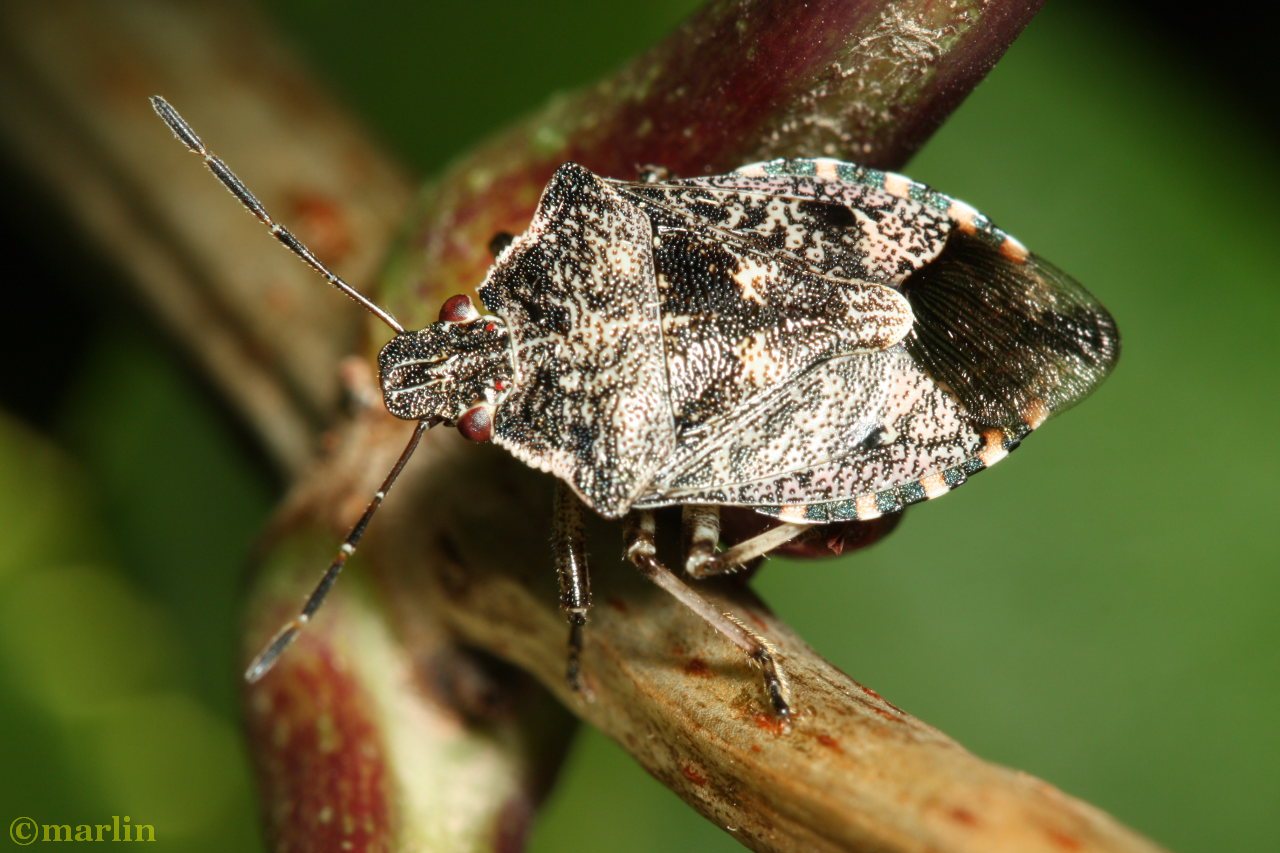 Stink bugs get their common name from the foul-smelling fluids they exude when disturbed. Both adults and nymphs have large glands that discharge underneath the body.  Stinkbugs are shy, I can tell you – and they will fly off very quickly if you get too close. I found this lovely predatory stinkbug Apetitus lineolatus at home at 9650 ft. elevation at White River Nat’l Forest, Eagle County, Colorado.

Stink Bugs are shield-shaped bugs with 5-segmented antennae; large, triangular scutellum; head relatively small and often “tucked into” a concavity in anterior margin of pronotum; ocelli present. Body is divided into 5 sections: pronotum, scutellum, two basal leathery portions of hemelytra [one on each side of the scutellum], and two apical membranous portions of hemelytra that completely overlap and act like a single section [1]. 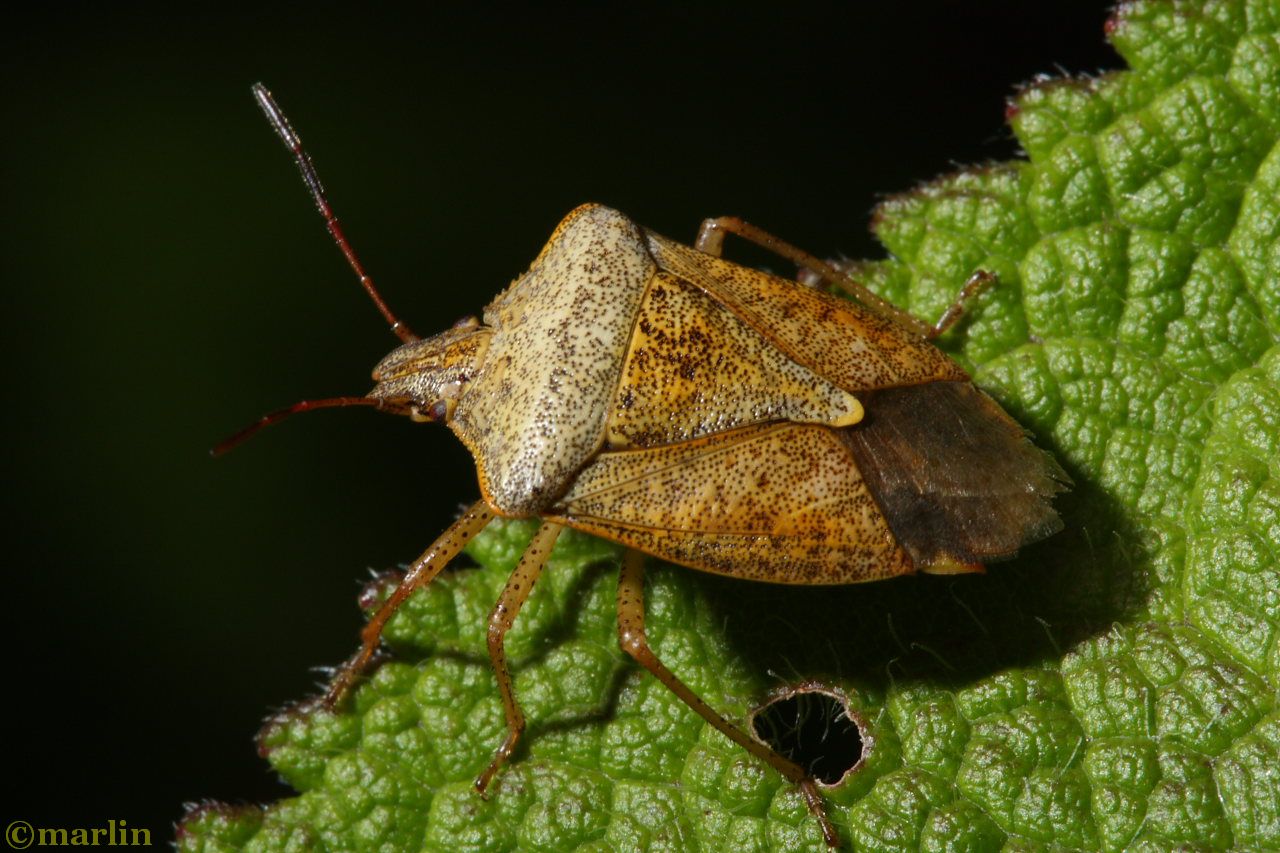 Most stink bugs are herbivorous, or plant-eating. Like all true bugs, the adults are equipped with a beak, or rostrum, a hypodermic needle-like device carried under the head, which it uses to pierce the plant tissue and suck out liquids. But they do not simply “suck out sap”, they inject a tissue-dissolving saliva and vacuum out the resulting slurry. Damage to the plant is a result of these liquefying enzymes. 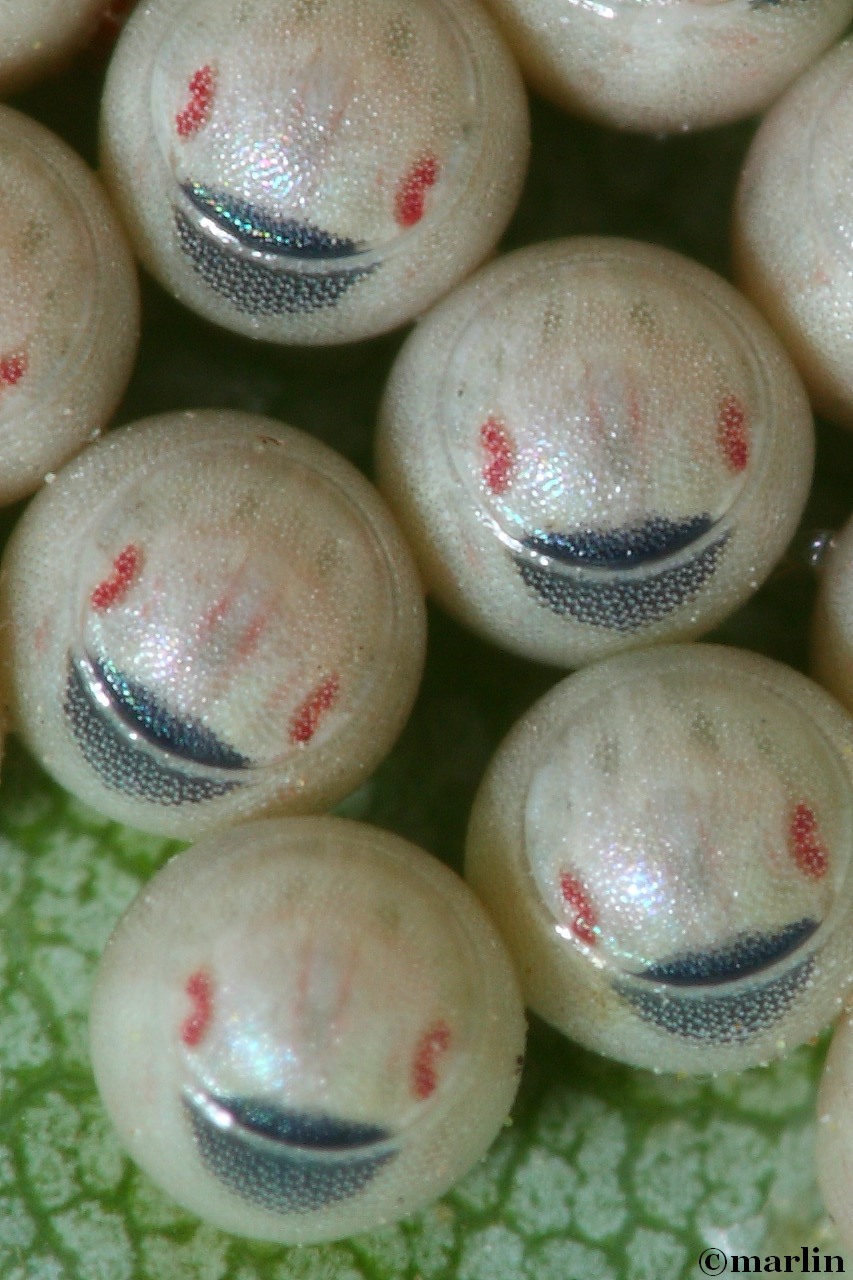 Have a nice day! Stink bug eggs pasted to the underside of a maple leaf attest to Mother Nature’s sense of humour. The illusion is formed by the nascent, red compound eyes and the black pre-scutellum. (There’s a sentence I never thought I’d write.) They have dimples like golf balls, and the cookie jar lids sit just so, ready to be opened at the first twitch of an emerging nymph. Each egg is just 1mm in diameter (about .04 inch). 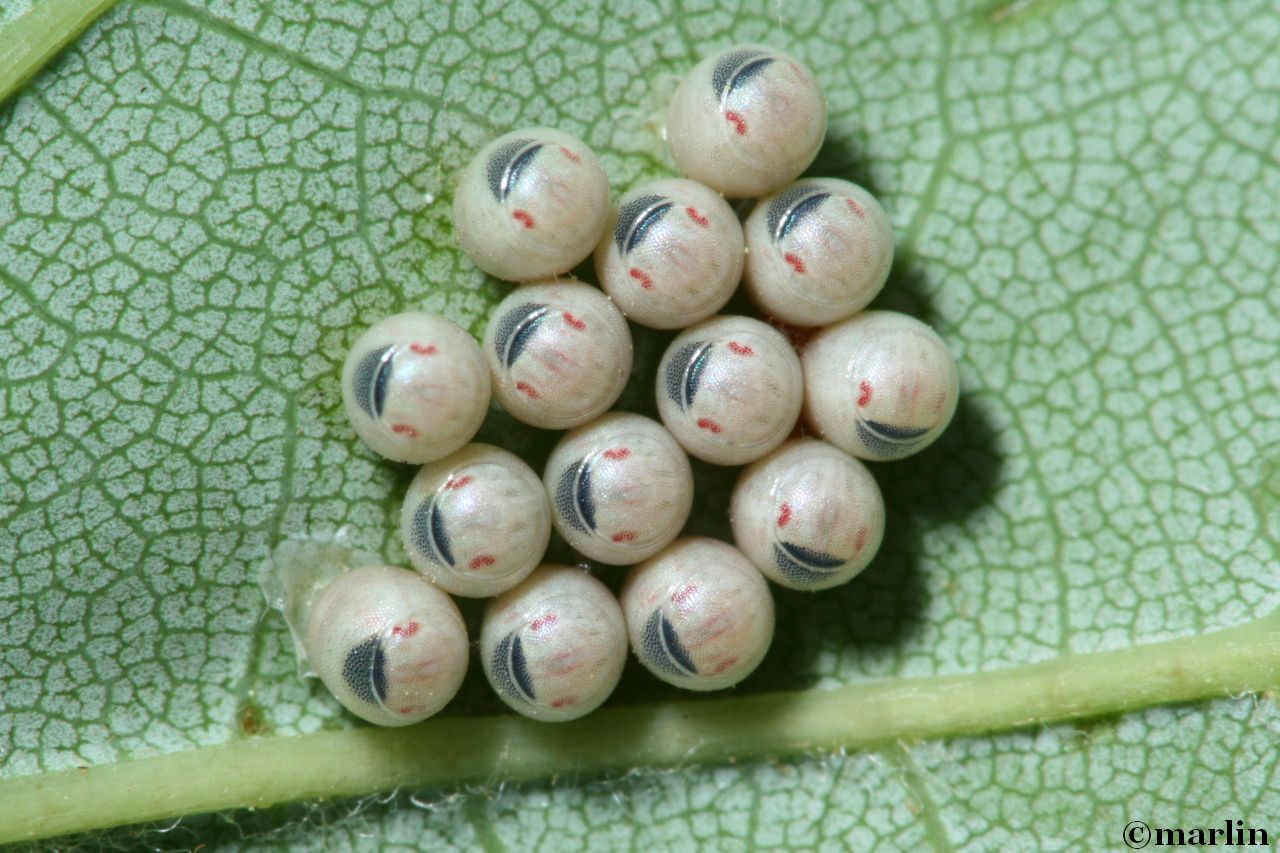 Stink bug nymphs of many species are gregarious, that is, they hang around together while growing through the various instars. The female inoculates the eggs with bacteria the nymphs will need to populate their digestive tracts, much like mammals convey microorganisms to their progeny by suckling. 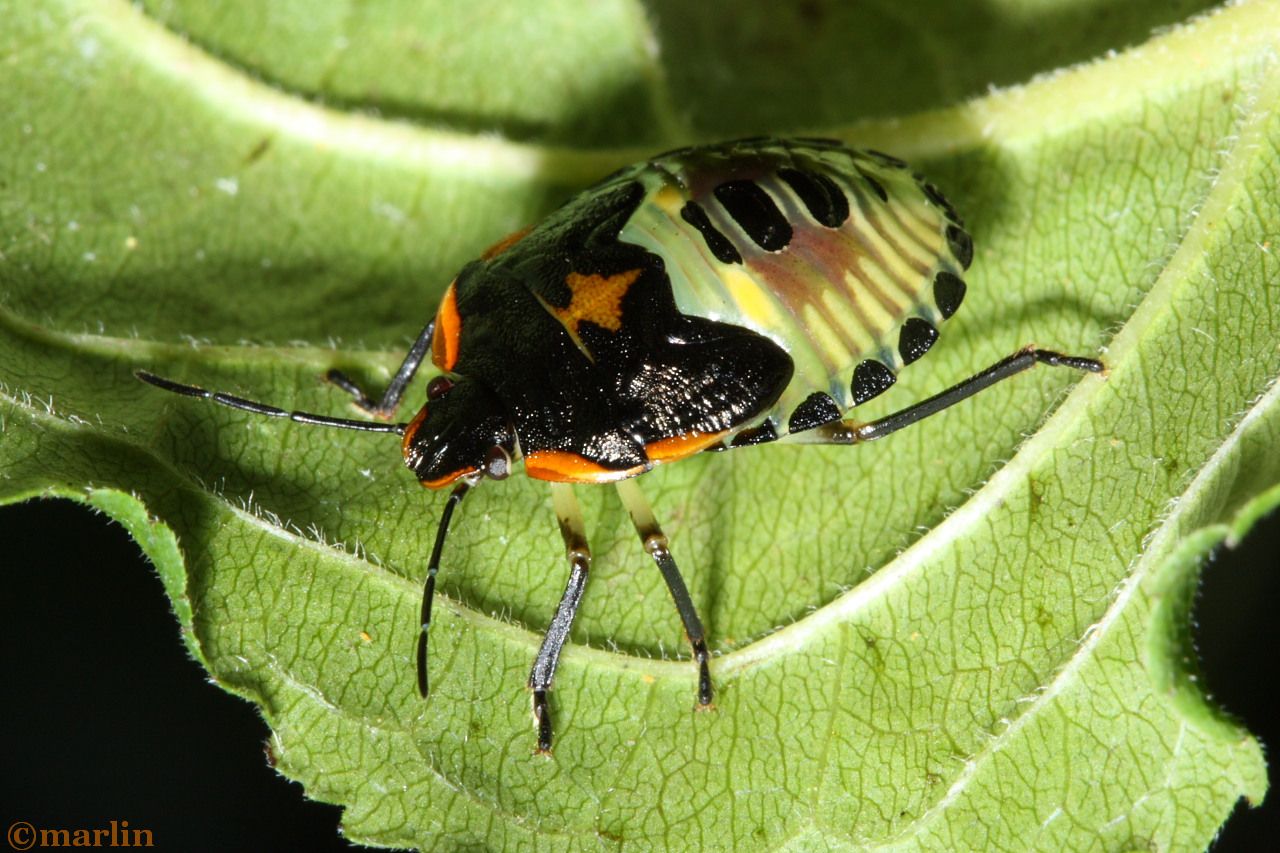 Late instar green stinkbug nymph is ready for its final molt. An insect grows in a series of expansions known as molts. The interval between molts is known as an instar. It is during these phases between molts that an insect does all of its growing. It is during this phase that insects pests inflict the most damage since they have to process and enormous amount of nutrient-deficient sap to build their bodies. After the final molt, an insects gets its wings and grows no more. – it only has to eat to live, not grow. 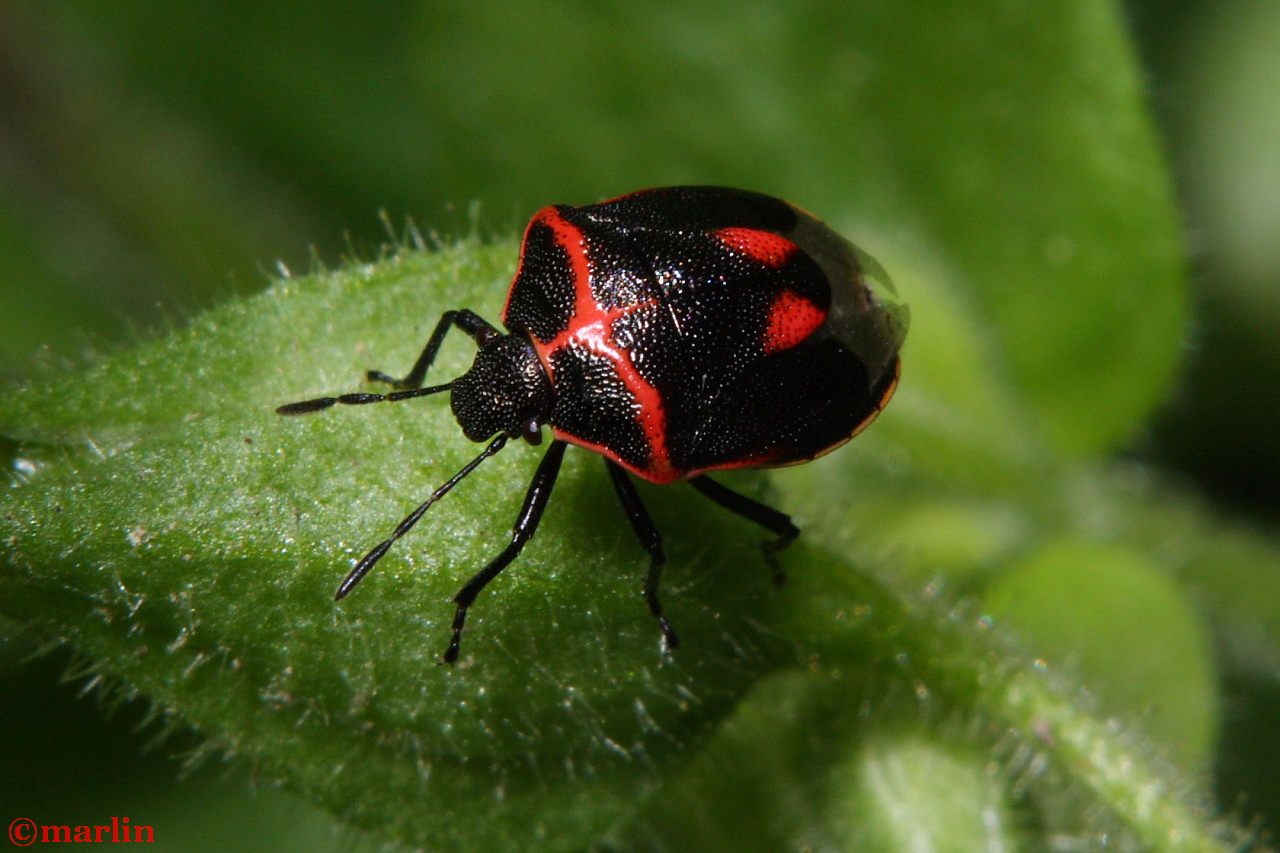 The relatively small (5-7 mm) twice-stabbed stinkbug Cosmopepla bimaculata is one I often find in clusters on morning glory or related plants. These little guys overwinter underneath leaf litter and can often be found amongst the snowmelt of a sunny day in early spring. 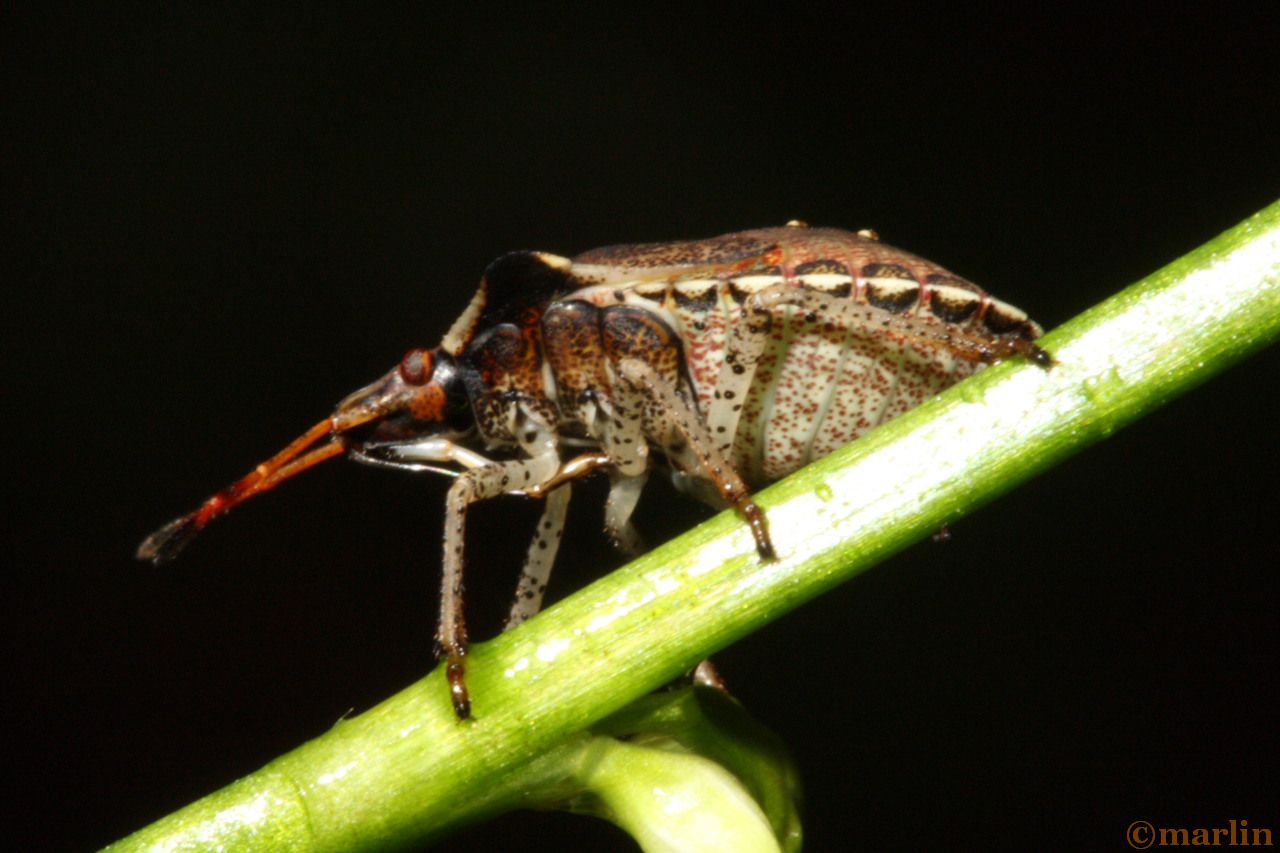 I found this energetic stinkbug nymph on a warm day in August, in the Allegheny National Forest near Merianville, Pennsylvania, USA. This is one beautiful bug, and is illustrative of the truly marvelous wonders to be found in nature. 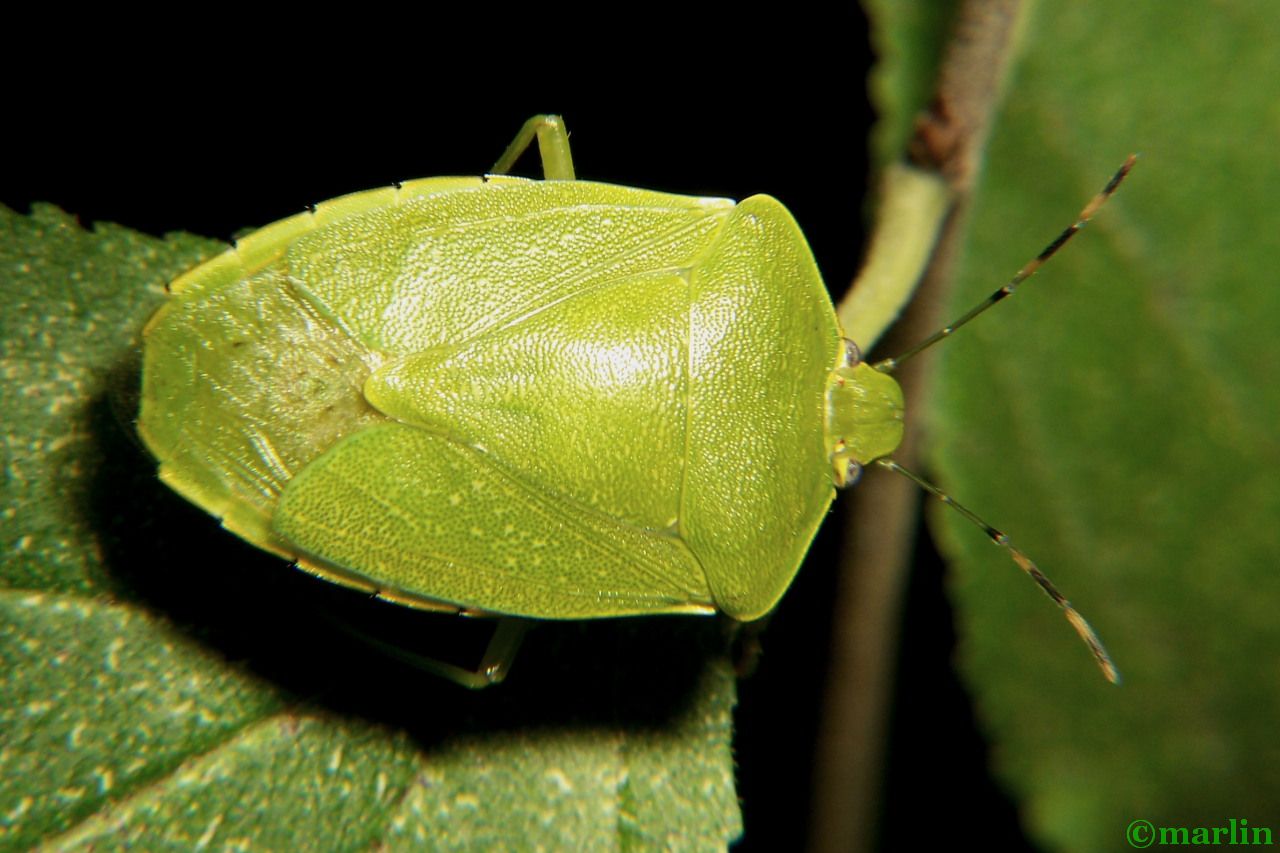 The green stink bug Chinavia hilaris is one of the largest and the most commonly encountered in North America. Several species of stink bugs that feed on peaches and other fruits early in the growing season cause a gnarling and distortion of the fruits called catfacing. Plant bugs and stink bugs, called catfacing insects, are largely responsible for this type of injury. They suck the sap from the fruit. If the peaches do not fall as a result of this attack, fruit development is inhibited in the area of the punctures. The surrounding healthy tissue continues to grow thereby causing a defect resembling a cat’s face.