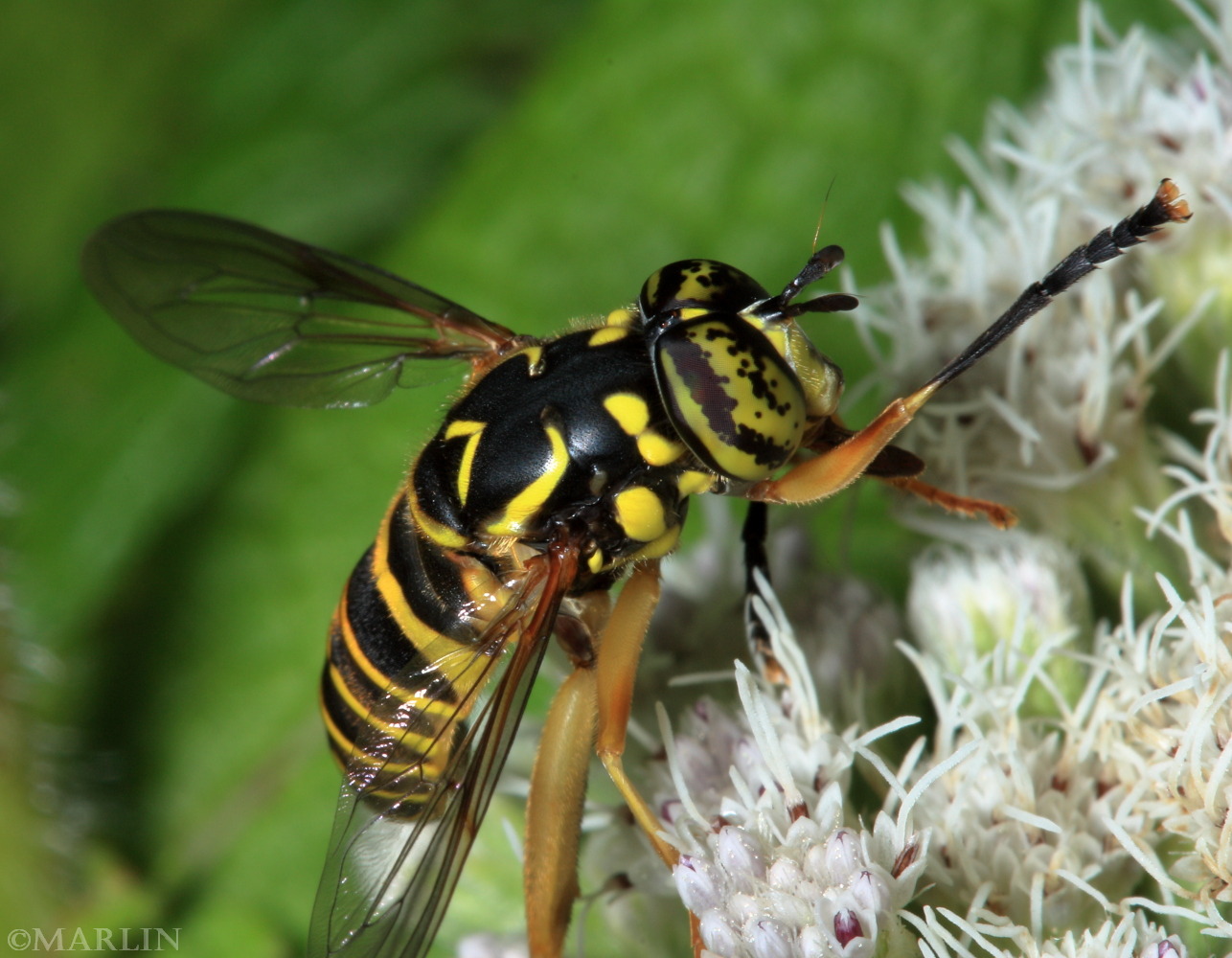 Live adult Syrphid Flies photographed at Allegheny National Forest near Marienville, Pennsylvania. Like all true flies, this creature has only two wings and no stinger. It has one of the loudest flying buzzes I’ve ever heard- you can hear them coming 50 feet away it seems. I love that sound! 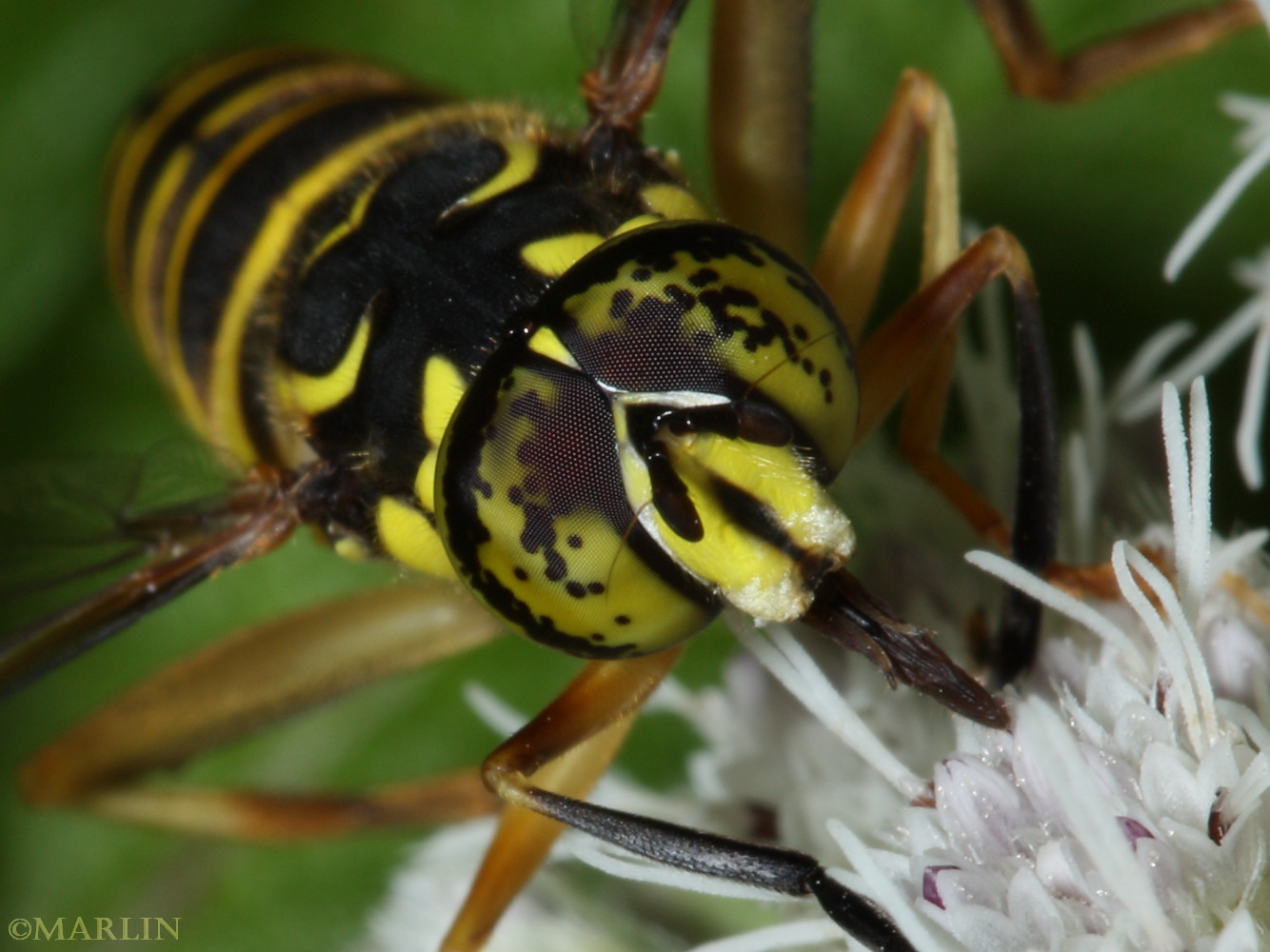 Pollen covers this fly’s snout like cake frosting, like he just came out of a 1980s discotheque bathroom, if you catch my drift.

The hover flies are a large group of generally beneficial insects. Their coloring and movements of most species mimic bees or wasps — they are either stout-bodied and covered with hair, resembling a bumble bee, or boldly patterned with yellow, orange and black, resembling wasps or honey bees. Some species even go so far as to wave their front legs in front of their face to mimic the jointed antennae of the potter wasps. Adult hover flies can generally be found hovering in midair or feeding at flower blossoms. They eat only nectar and pollen. However, their larvae can be rapacious predators of aphids, thrips, and mites, or parasitic in the nests of ants or solitary bees. Still other larvae scavenge in soil or decaying plant material or eat living plants. 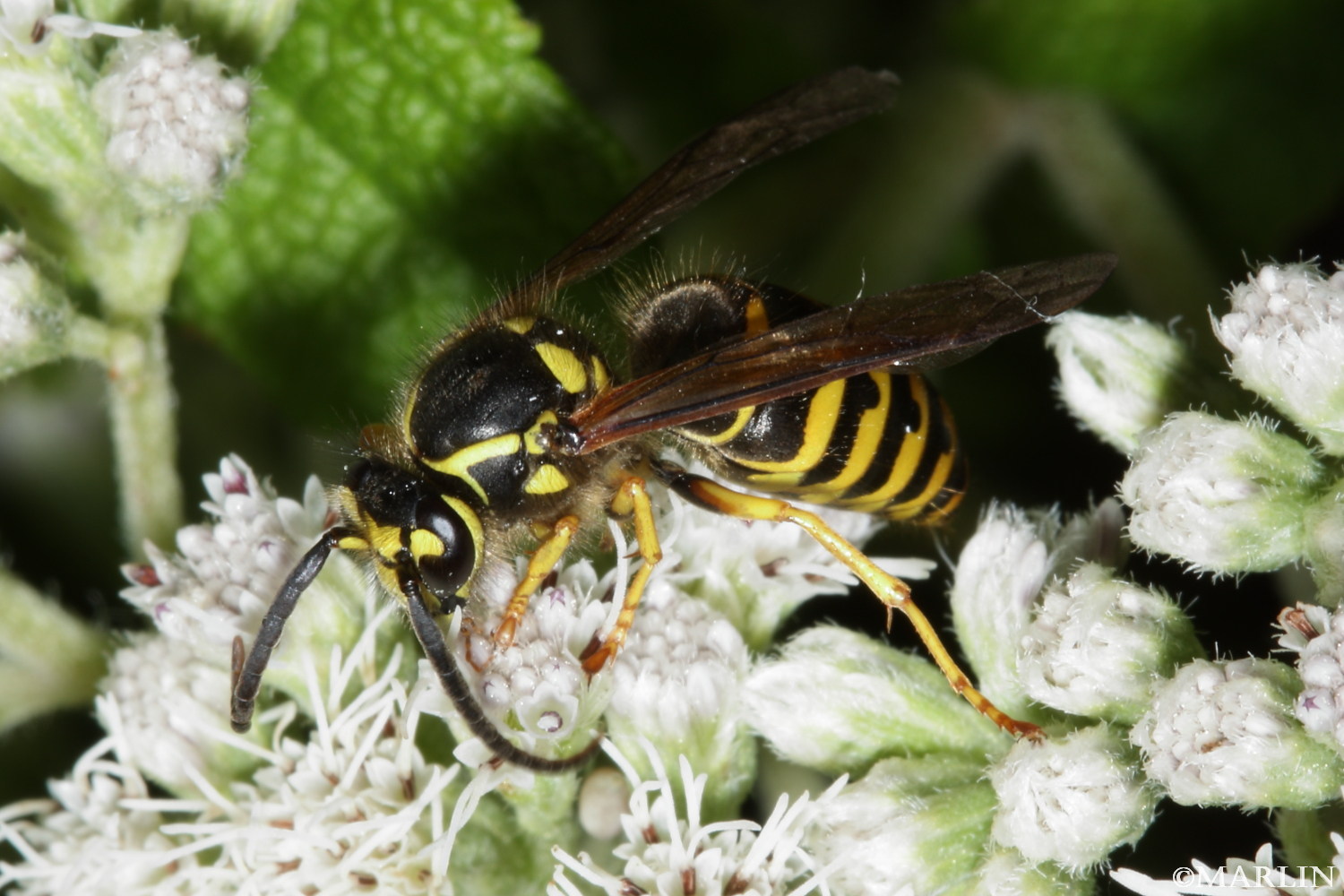 Case in point. Spilomyia is such a good yellowjacket mimic that I had this one single shot of a downy yellowjacket (above) in the same folder with the fly pics – for years I did not notice it. Did you? 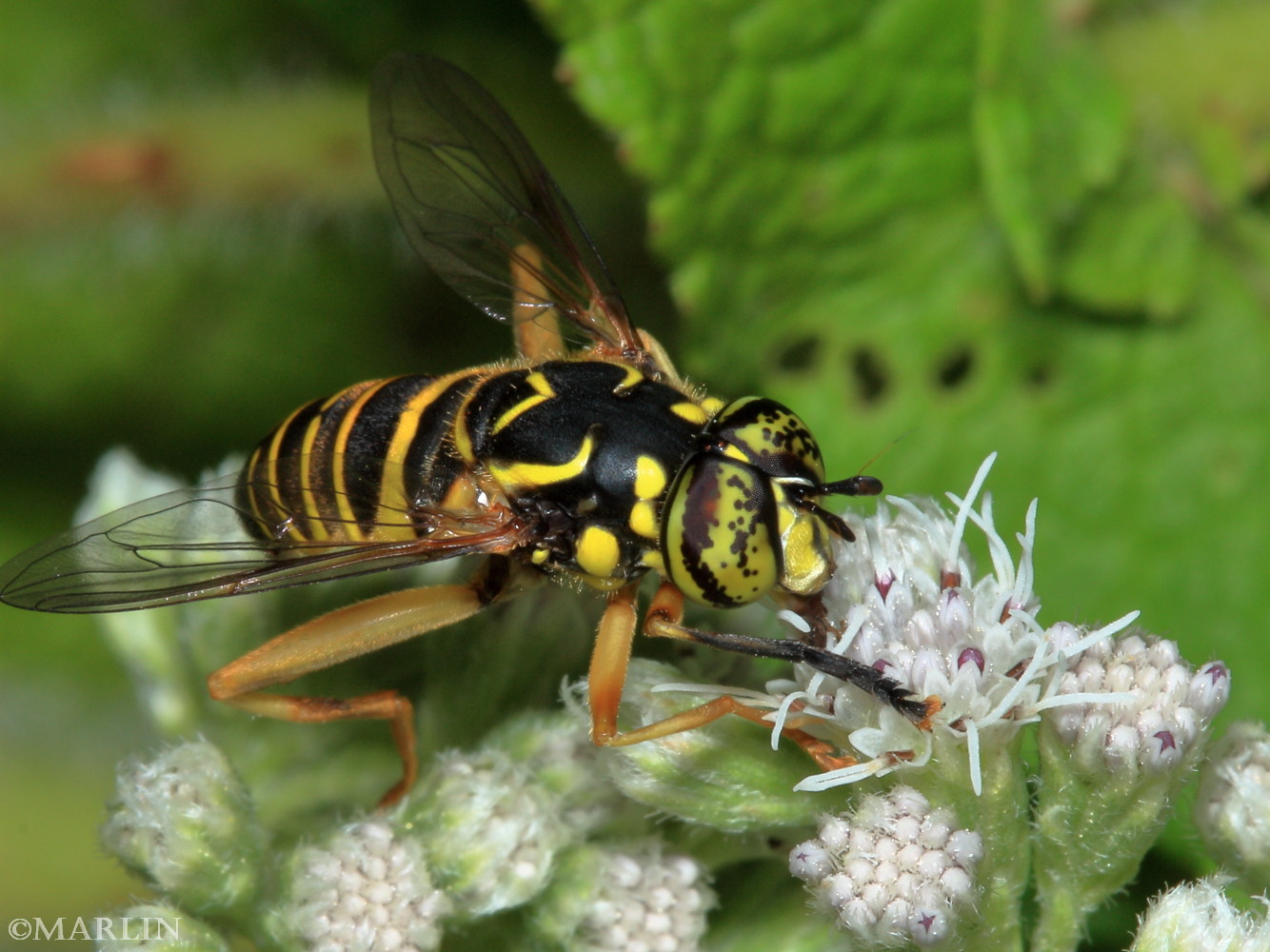 I just love these flies. What better way to spend a summer afternoon that stalking these increasingly-rare creatures about in a flower garden? 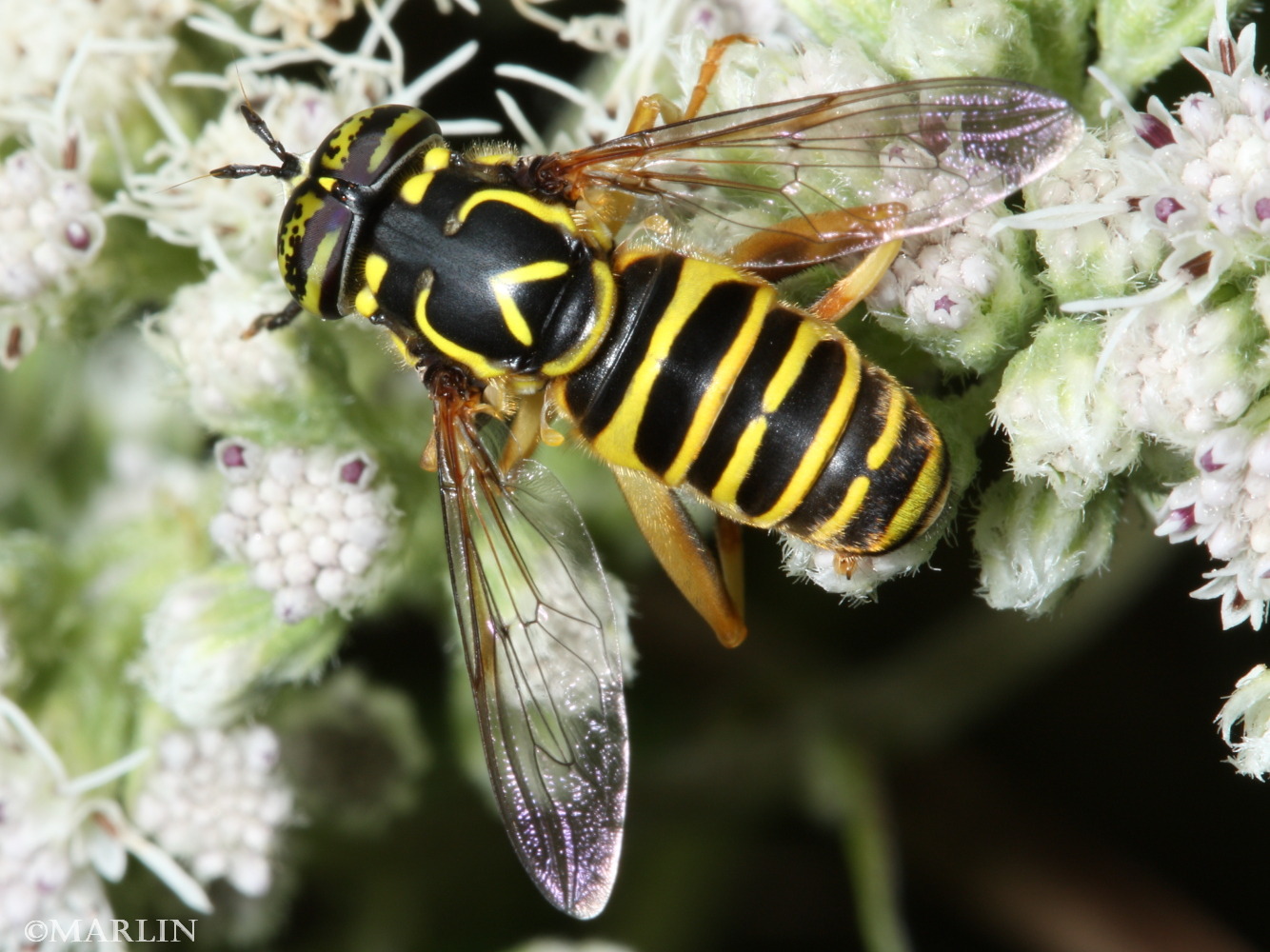 Like many insects, this fly has 3 simple eyes (ocelli) between two compound eyes

Most hover flies are between 5-20 mm long, brightly colored in yellow and black, and have large compound eyes that nearly cover the head. One rule of thumb for identifying hover fly gender is, if the eyes meet at the top of the head, it’s a male specimen. Each wing has a characteristic fold, or “false vein” which can be visible to the naked eye – it is located anterior to the first large vein that runs all the way to the outer margin of the wing. Of course, being true flies, they have only one pair of wings, plus the characteristic halteres, or bulb-like organs that evolved from the second pair of flying wings. In Syrphid flies, however, the halteres are fairly inconspicuous.