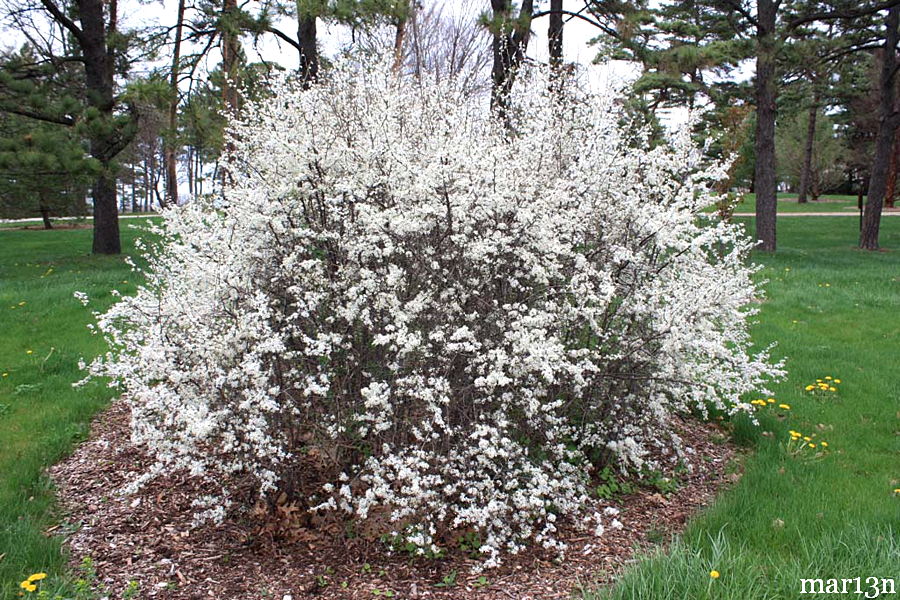 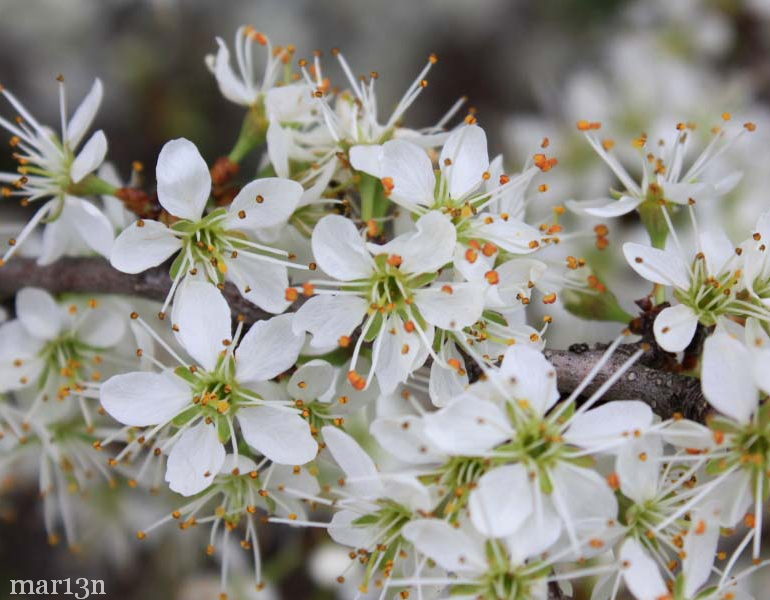 A deciduous large shrub or small tree growing to 5 m tall, with blackish bark and dense, stiff, spiny branches. The leaves are oval, 2 – 4.5 cm long and 1.2 – 2 cm broad, with a serrated margin. The flowers are 1.5 cm diameter, with five slightly creamy-white petals; they are produced shortly before the leaves in early spring, and are hermaphroditic and insect-pollinated. The fruit, called a “sloe” is a drupe 10 – 12 mm diameter, black with a pale purple-blue waxy bloom, ripening in autumn, and harvested in October or November – usually after the first frosts. They are thin-fleshed, with a very strongly astringent flavor when fresh. 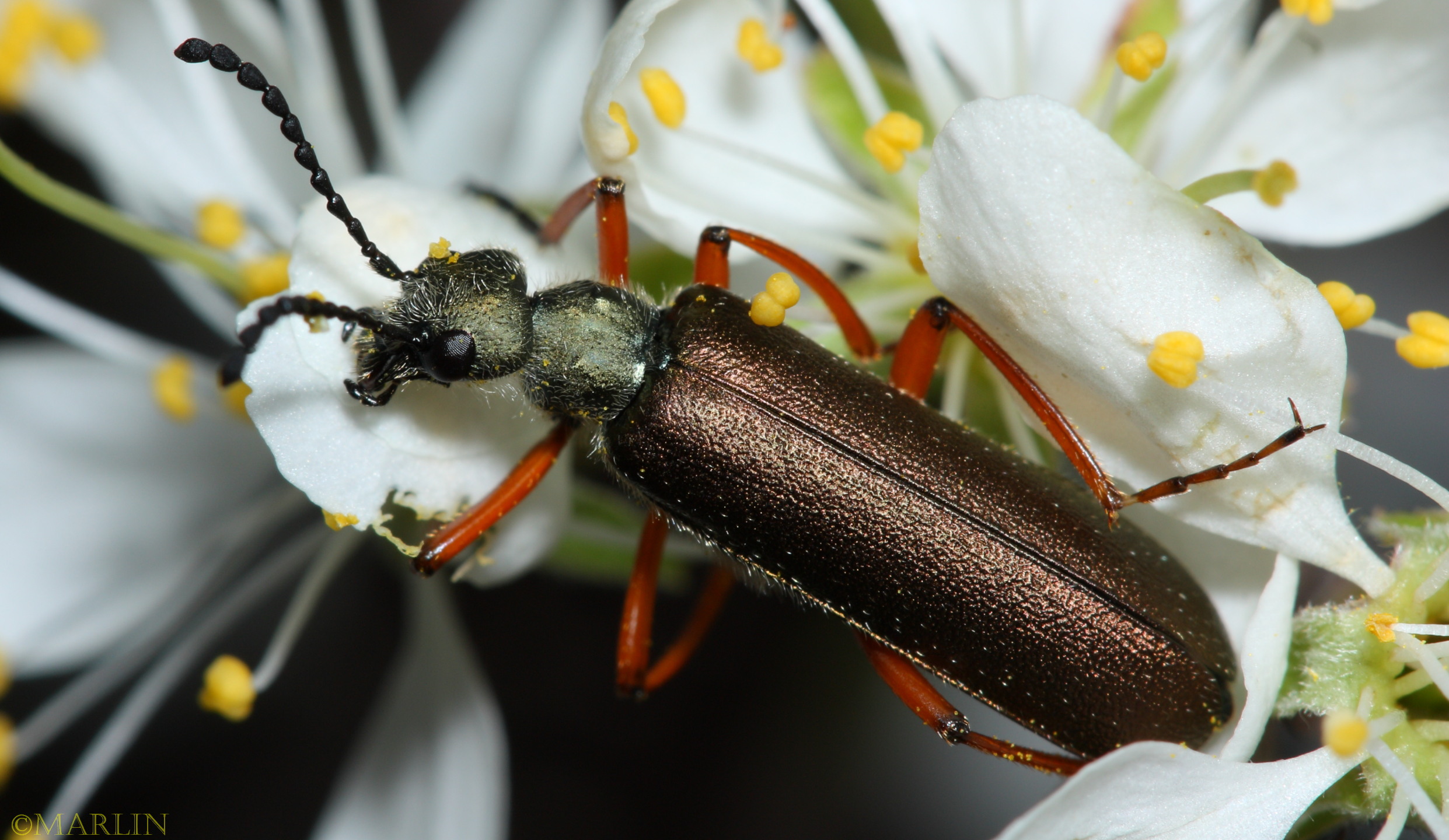 A blister beetle, Lytta aenea, is fond of Sloe blossoms. Sloe has escaped captivity and thrives in DuPage County in Illinois.

Extensively planted for hedging and for cover for game birds. The small thorns of the plant are relatively common causes of minor wounds in livestock, and these wounds often fester until the thorn is expelled or removed.

Straight blackthorn stems have traditionally been made into a walking stick or club (known in Ireland as a shillelagh).  The wood would be smeared with butter and placed up a chimney to cure, giving the Shillelagh its typical black shiny appearance. Shillelaghs may be hollowed at the heavy “hitting” end and filled with molten lead to increase the weight beyond the typical two pounds; this sort of Shillelagh is known as a ‘loaded stick’. 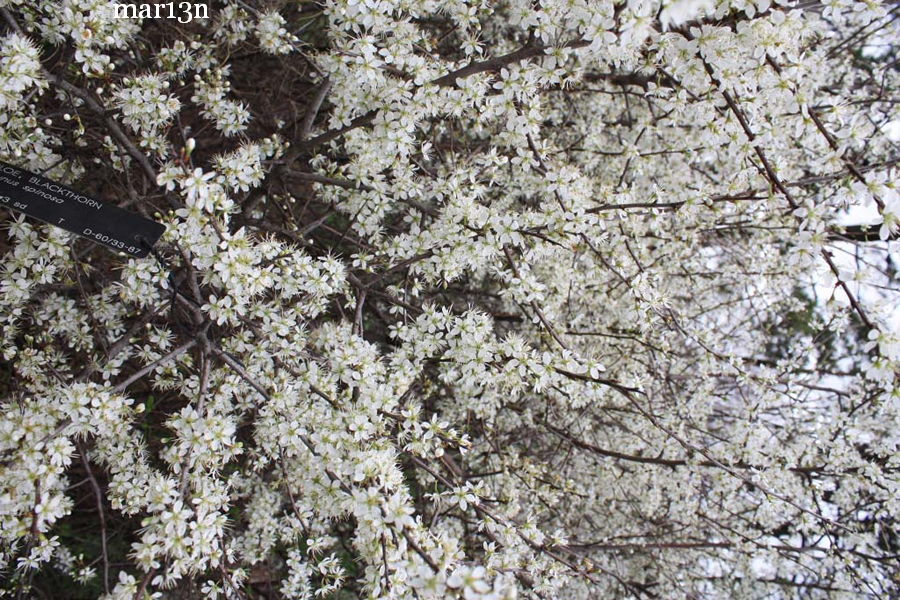 Blackthorn is known for its dense, impenetrable thickets and thorns

Sloe gin is a red-colored liqueur flavored with sloe berries, the fruit of the blackthorn, a relative of the plum. Sloe gin has an alcohol content between 15 to 30 percent by volume (30-60 proof). The traditional way of making sloe gin is to infuse gin with the berries. Sugar is required to ensure that the sloe juices are extracted from the fruit. Almond flavoring may be added.

Many commercial sloe gins today are made by flavoring the less expensive neutral grain spirits and produce a fruit cordial effect although a number of long established reputable manufacturers still use the traditional method.

Combine sloe gin and lemon soda or lemon juice in a shaker filled with ice, shake, pour into a highball glass filled with ice and fill with club soda or sparkling water.

A “sloe-thorn worm” used as fishing bait is mentioned in the 15th century work, The Treatyse of Fishing with an Angle, by Juliana Berners. The expression “sloe-eyed” for a person with dark eyes comes from the fruit, and is first attested in A.J.Wilson’s 1867 novel Vashti.