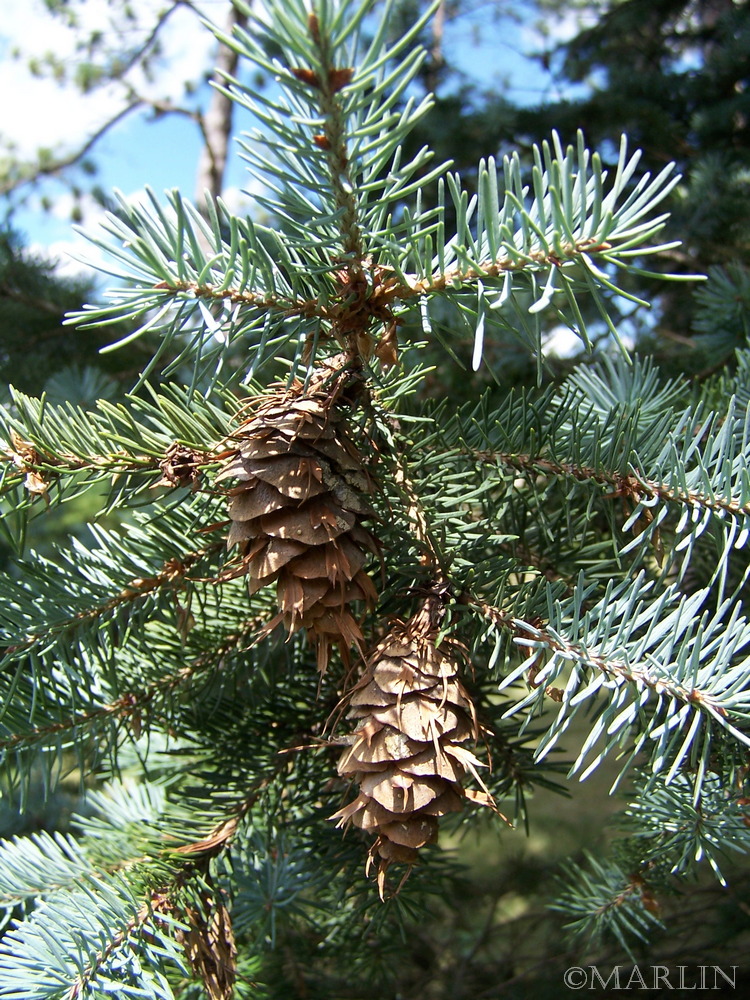 The Douglas-fir is one of the world’s most important and valuable timber trees and historically it was used for telephone poles and railway ties, among many other uses. Today Douglas-fir is also grown for Christmas trees. The winged seeds are eaten by western squirrels, the red tree mouse, and the dusky-foot woodrat. The foliage and twigs are browsed by antelope, mule and white-tailed deer, elk, and mountain sheep. The staminate cones and needles of Douglas-fir provide a significant winter food of the blue grouse.

Family Pinaceae: Pine, Cedar, Spruce, Fir
one of the world’s most important and valuable timber trees and especially as a popular Christmas tree. 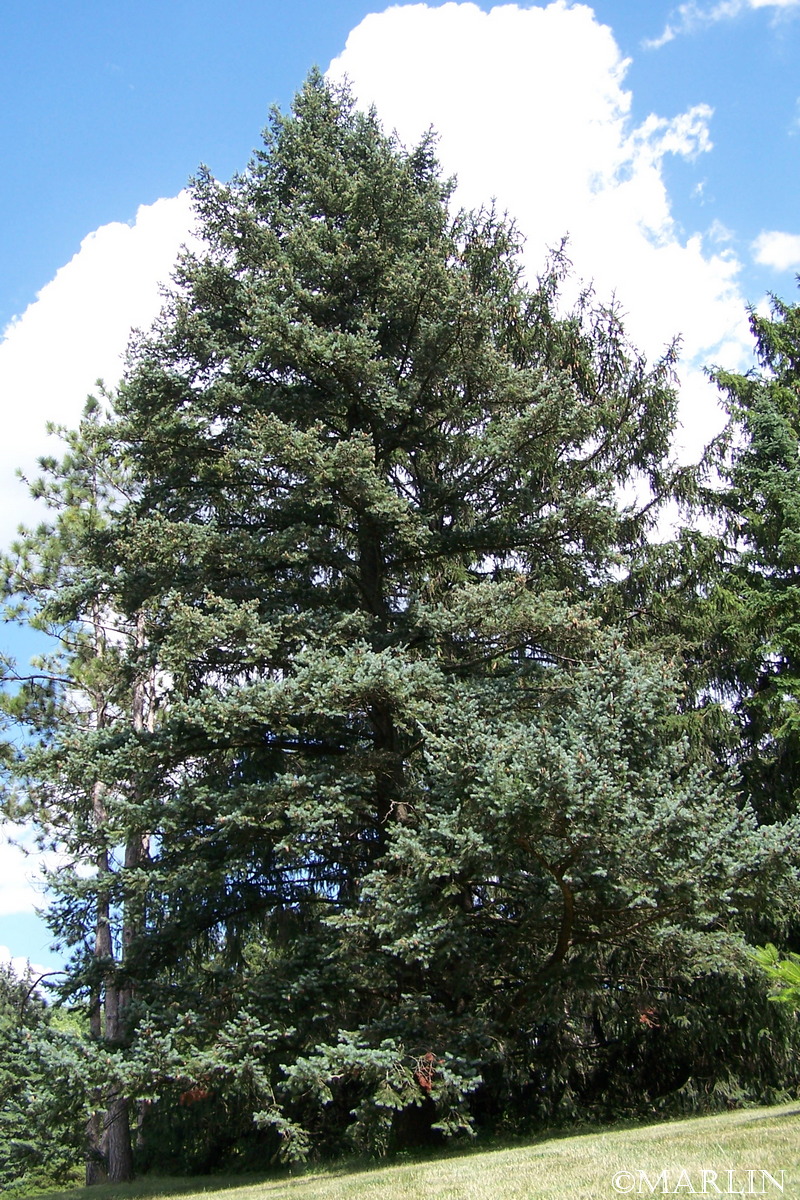 It has been a major component of the forests of western North America since the mid-Pleistocene. Although the fossil record indicates that the native range of Douglas-fir has never extended beyond western North America, the species has been successfully introduced in the last 100 years into many regions of the temperate forest zone. Two varieties of the species are recognized: P. menziesii (Mirb.) Franco var. menziesii, called coast Douglas-fir, and P. menziesii var. glauca (Beissn.) Franco, called Rocky Mountain or blue Douglas-fir. 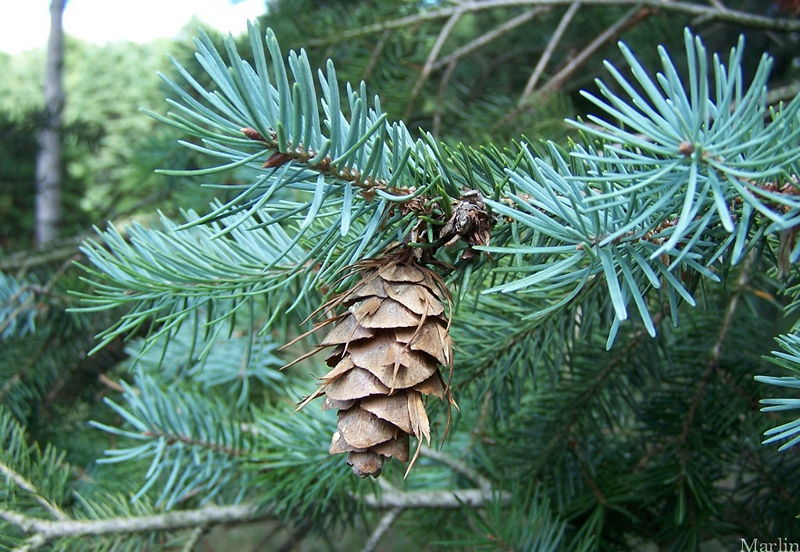 Over 60 species of insects are indigenous to Douglas-fir cones, but only a few species damage a significant proportion of the seed crop.  The most destructive insects include: (a) the Douglas-fir seed chalcid (Megastigmus spermotrophus), which matures in the developing seed and gives no external sign of its presence; (b) the Douglas-fir cone moth (Barbara colfaxiana) and the fir cone worm (Dioryctria abietivorella) whose larvae bore indiscriminately through the developing cones and may leave external particles of frass; and (c) the Douglas-fir cone gall midge (Contarinia oregonensis) and cone scale midge (C. washingtonensis), which destroy some seed but prevent harvest of many more by causing galls that prevent normal opening of cones.

The latitudinal range of Douglas-fir is the greatest of any commercial conifer of western North America. Its native range, extending from latitude 19Â° to 55Â° N., resembles an inverted V with uneven sides. From the apex in central British Columbia, the shorter arm extends south along the Pacific Coast Ranges for about 2200 km (1,367 mi) to latitude 34Â° 44′ N., representing the range of the typical coastal or green variety, menziesii; the longer arm stretches along the Rocky Mountains into the mountains of central Mexico over a distance of nearly 4500 km (2,796 mi), comprising the range of the other recognized variety, glauca- Rocky Mountain or blue. Nearly pure stands of Douglas-fir continue south from their northern limit on Vancouver Island.

Damaging Agents- From seed to maturity, Douglas-fir is subject to serious damage from a variety of agents. Douglas-fir is host to hundreds of fungi, but relatively few of these cause serious problems. Various species of Pythium, Rhizoctonia, Phytophthora, Fusarium, and Botrytis may cause significant losses of seedlings in nurseries whereas Rhizina undulata, shoestring root rot (Armillaria mellea), and laminated root rot (Phellinus weirii) have caused damage in plantations [1].

Douglas-fir is grown as a Christmas tree on rotations ranging from 4 to 7 years. Trees are sheared each year to obtain a pyramid shaped crown. 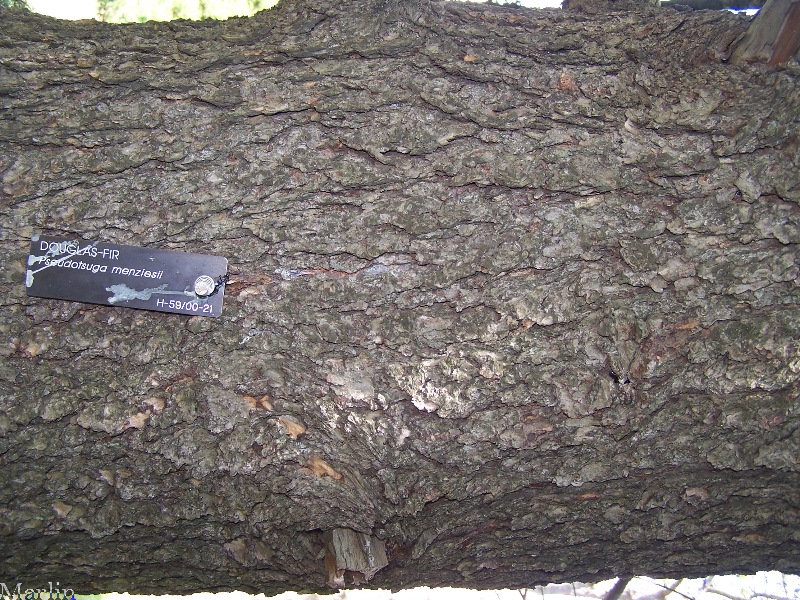