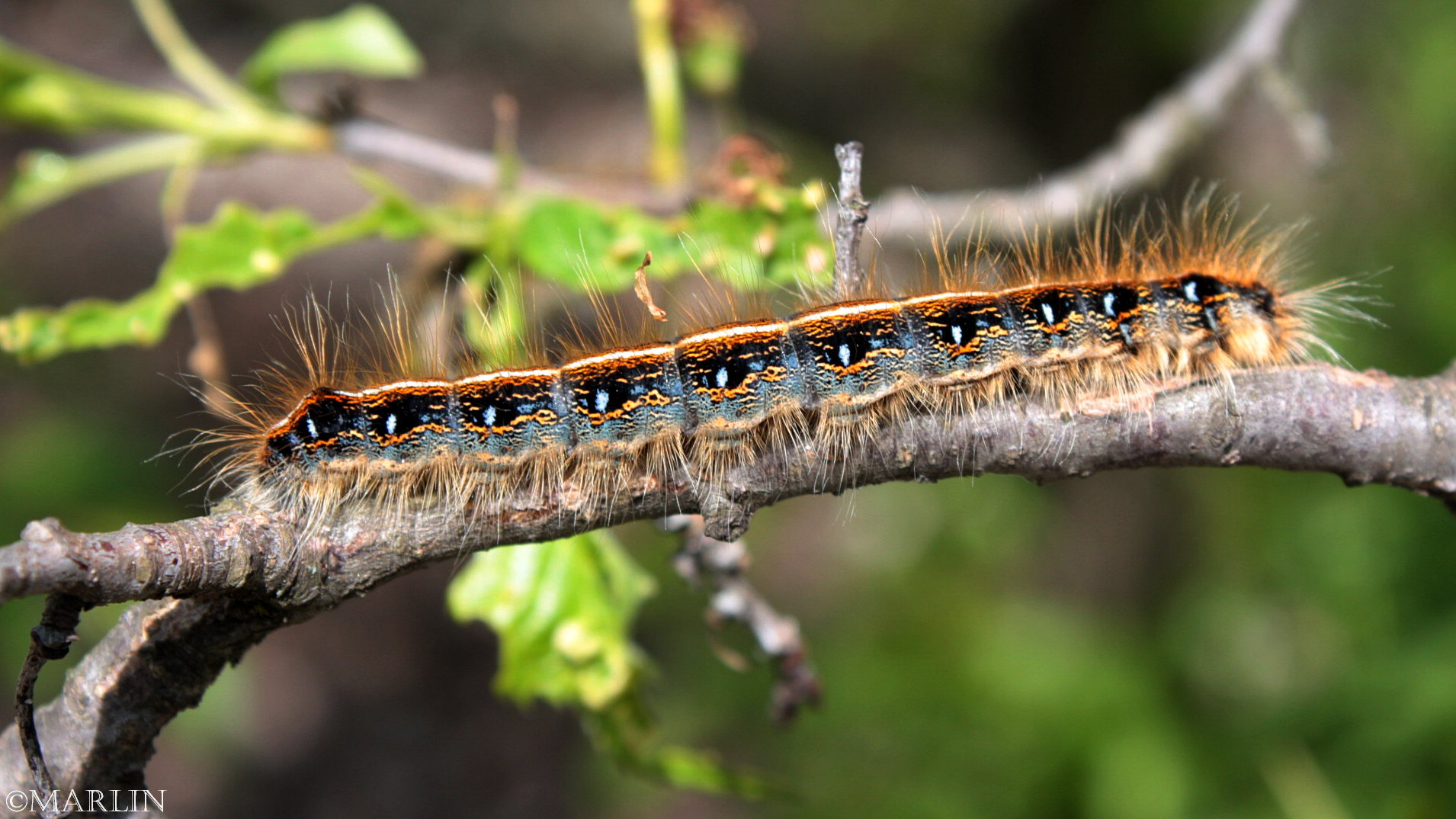 The eastern tent caterpillar constructs unsightly silken “tents” in trees, and can defoliate a tree in a matter of a few short weeks in summer. However, damage to the tree is rarely permanent or fatal. 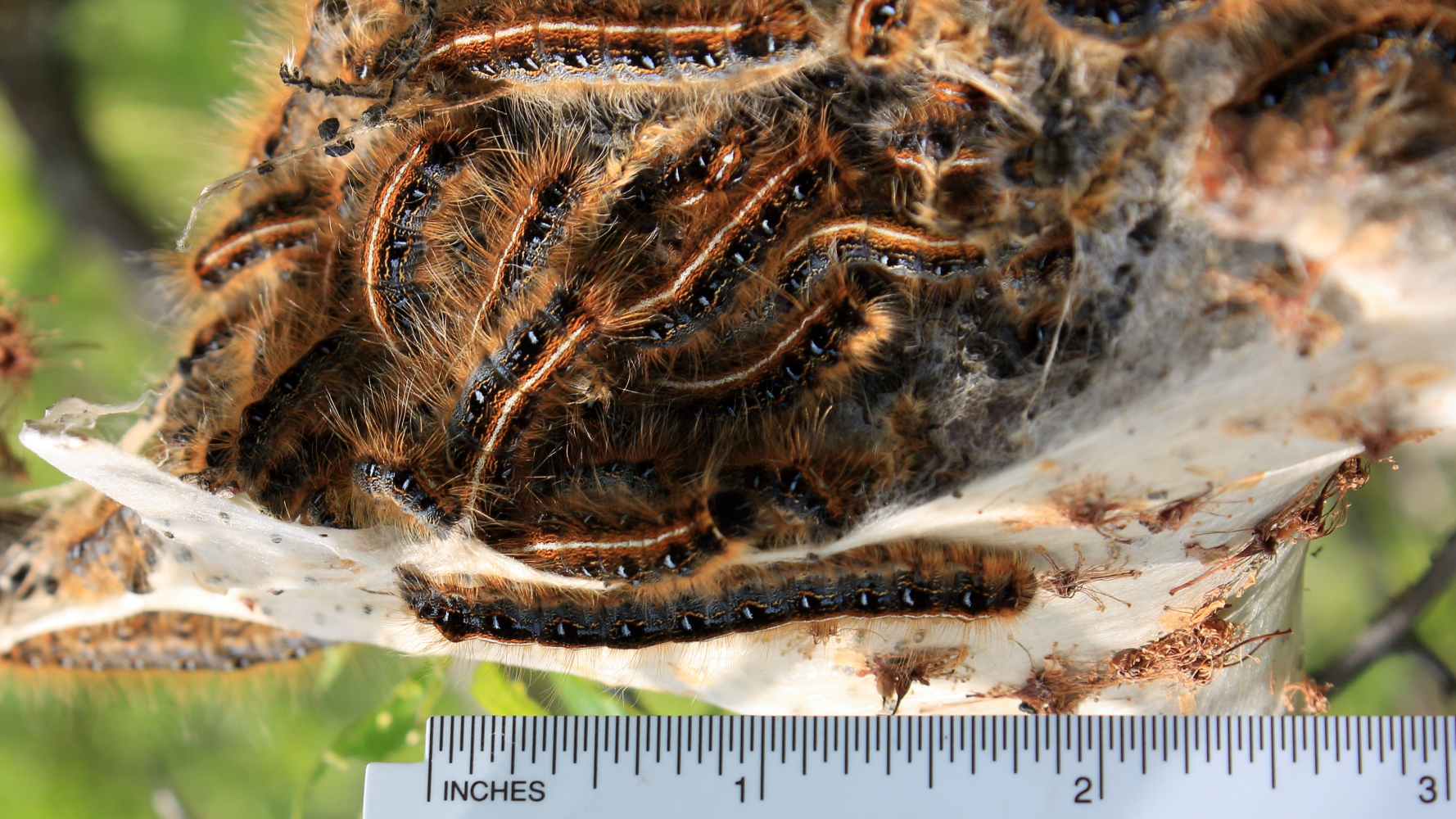 The Eastern tent caterpillar is the larval form of the moth species Malacosoma americanum. These insect pests spin silken communal nests (tents) in the branches of trees. The adult moths lay eggs almost exclusively on trees in the plant family Rosaceae, particularly cherries (Prunus) and apple (Malus). The caterpillars are hairy with areas of blue, white, black and orange. The blue and white colors are structural colors created by the selective filtering of light by microtubules that arise on the cuticle, much as the hair of Polar Bears (Ursus maritimus) present the color white even though they themselves are translucent.

The adult moth lays her eggs in a single batch in late spring or early summer. The egg masses contain 200-300 eggs. Development of the embryo proceeds rapidly and within three weeks fully formed caterpillars can be found within the eggs. The small caterpillars lie dormant until the following spring, when they chew their way through the shells of their eggs just as the buds of the host tree begin their spring growth surge.

Newly hatched caterpillars construct a silk tent soon after emerging. They live in, on, and around the tent for the whole of their larval life, expanding the tent each day to accommodate their increasing size. Under field conditions, the caterpillars feed three times each day: just before dawn, at mid-afternoon, and in the evening after sunset. During each bout of feeding the caterpillars emerge from the tent, add silk to the structure, move to distant feeding sites en masse, feed, then return immediately to the tent where they rest until the next activity period. The exception to this pattern occurs in the last instar when the caterpillars feed only at night. The caterpillars lay down pheromone trails to guide their movements between the tent and feeding sites.

The tent of the eastern tent caterpillar is among the largest built by any tent caterpillar. The tents are constructed in the crotch of the host tree and are usually oriented so that the broadest face of the structure faces the morning sun. Silk is added directly to the surface of the tent as the caterpillars walk back and forth over the structure. The silk is laid down under slight tension and it eventually contracts, causing the newly spun layer of silk to separate from the previously spun layer. The tent thus consists of discrete layers separated by gaps within which the caterpillars rest. The tent has openings that allow the caterpillars to enter and exit.

Light has a great effect on the caterpillars while they are spinning and they always spin the majority of their silk on the most illuminated face of the tent. Indeed, if under experimental conditions the dominant light source is directed at the tent from below, the caterpillars will build their tent upside down. Caterpillars continue to expand their tent until they enter the last phase of their larval life. The sixth-instar caterpillar conserves its silk for cocoon construction and adds nothing to the tent. The tents are multifunctional. They facilitate basking, offer some protection from enemies, provide for secure purchase, and act as a staging site from which the caterpillars launch en masse forays to distant feeding sites. The elevated humidity inside the tent may facilitate molting.

The eastern tent caterpillar is of some importance as a plant pest since it may defoliate ornamental trees. Defoliated trees, however, rarely suffer significant damage and typically refoliate within several weeks. — Adapted From Wikipedia

Moths and their larvae (caterpillars) are major agricultural pests worldwide. The caterpillar of the gypsy moth (Lymantria dispar) causes severe damage to forests in the northeast United States, where it is an invasive species. In tropical and subtropical climates, the diamondback moth (Plutella xylostella) is perhaps the most serious pest of brassicaceous crops.
Insects & Spiders | Moths | Moths Index | Butterflies Index