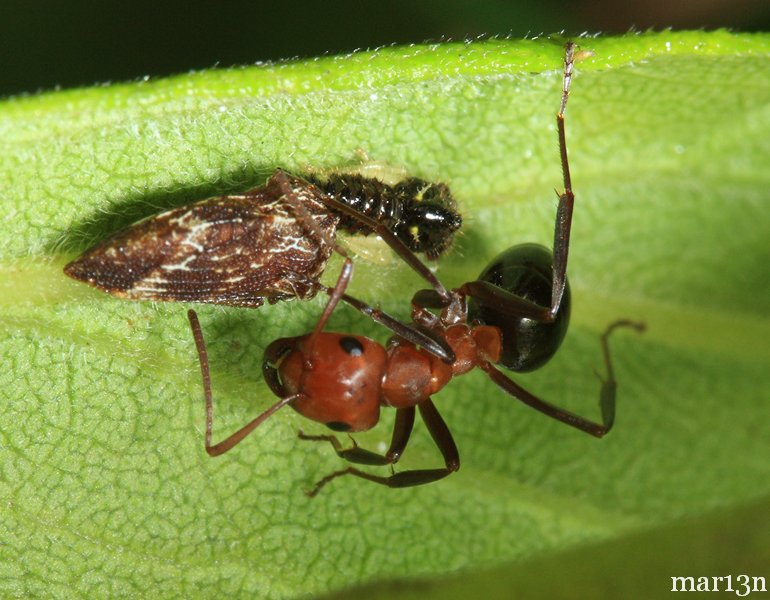 Allegheny mound ants are named for their large, conspicuous nests which can be 2 meters or more across and a meter high. They are native to eastern North America from Nova Scotia to Georgia. The ants pictured here were resident in the Allegheny National Forest of northeastern Pennsylvania.  AMA are aggressive foragers for protein in the form of arthropod prey, principally insects. They also obtain carbohydrates from ingesting sugar-rich honeydew excreted by aphids and leafhoppers, which the ants cultivate, herd, and protect from predators. 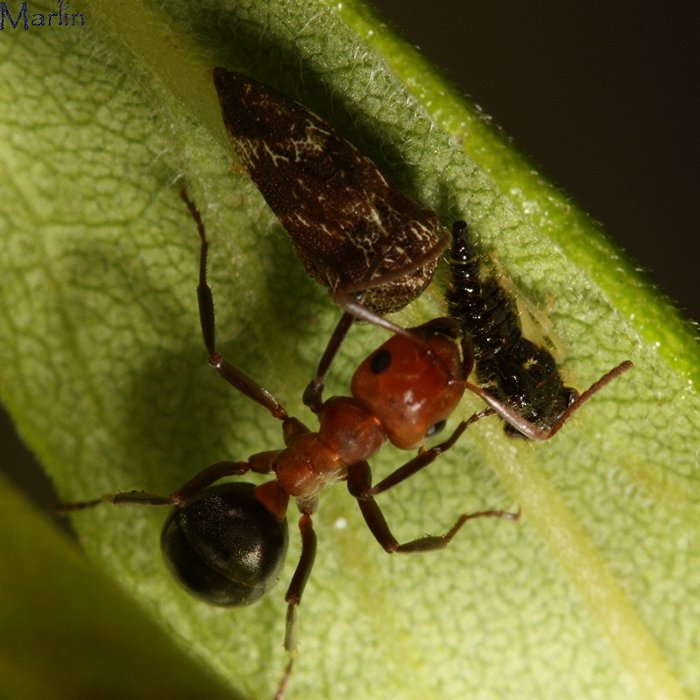 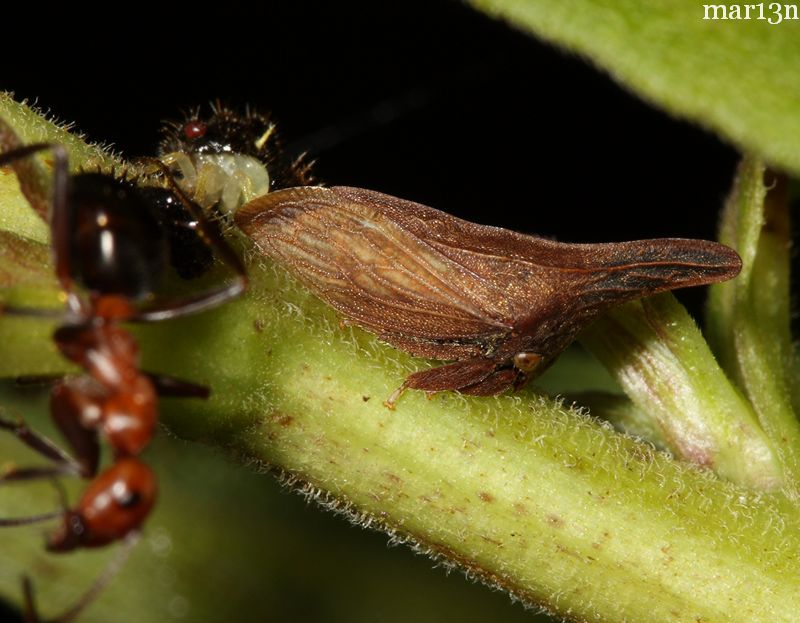 AMA become pests with their extensive tunneling, and their unfortunate habit of killing plants near the nest by injecting formic acid into them. Even small trees and shrubs can fall victim [2]. AMA will bite if disturbed, and an aggrieved colony can boil ants out an alarming rate. The ants use pheromones to alert each other to intruders.

Aphids in the Suborder Sternorrhyncha are plant sap-processing machines. They feed by inserting their hypodermic needle-like proboscis directly into a plant’s vascular system (phloem), which contains carbohydrate-laden sap under pressure. As a passive but very efficient process, sap flows into the insect’s digestive system. [1]

The sapsuckers must process a huge quantity of liquid, since the sap consists largely of water with only tiny amounts of nutrients. The excess (called honeydew) is excreted so copiously it has managed to fuel a symbiosis with ants. In return for the honeydew, ants will carry aphids or hopper nymphs to more vulnerable (and hence more productive) areas of the plant, and protect their charges by killing aphid-predators such as lady beetle and lacewing larvae. However, AMA and other ant species will also harvest the resulting “excess” aphids as a bonus protein source. [1]

Scientific studies have shown that ants exude pheromones and other chemical messengers onto the foliage where they walk; those chemicals have the effect of immobilizing the aphids in that area, and they inhibit the growth of the aphids’ wings; flight being one method whereby the ants could lose their meal tickets. Ants weave an extremely complex matrix of pheromones and other chemical compounds in their environment; we are just beginning to learn of the powers they wield through them.

Hymenoptera (Latin for membrane wing) is a vast assemblage of insects second only to Coleoptera (beetles) in the number of described species. Hymenoptera number some 115,000 species – 18,000 of them call North America home. Hymenopterans inhabit a wide variety of habitats, and show an incredible diversity in size, behavior, structure and color.
Insects & Spiders | Bees & Wasps Index | Bees & Wasps Main | Beetles Index