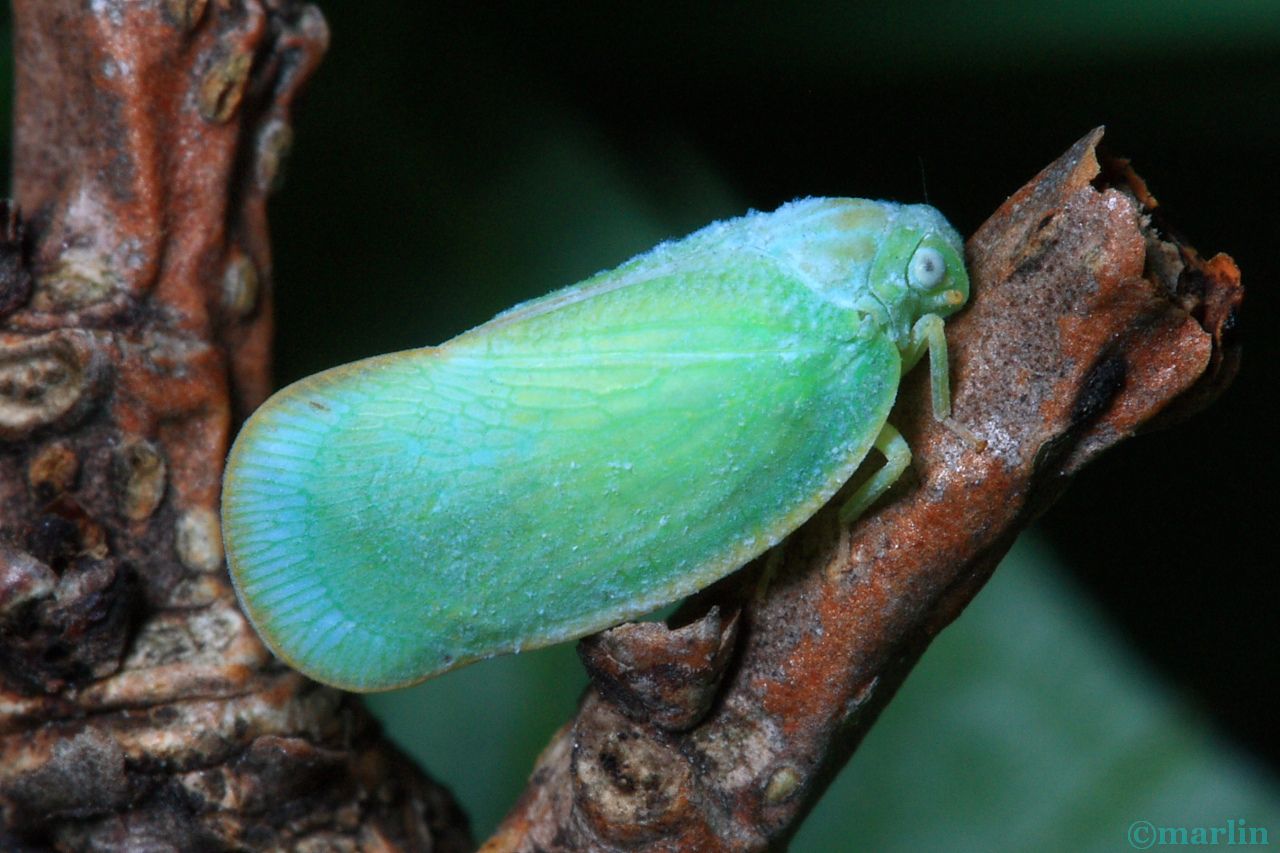 Cicadas, leaf, plant, and tree hoppers, spittlebugs
Hemiptera is presently divided into four suborders, after it was established that the families grouped together as “Homoptera” are not as closely related as had previously been thought. Auchenorrhyncha contains the cicadas, leafhoppers, treehoppers, planthoppers, and froghoppers. The suborder Sternorrhyncha contains aphids, whiteflies, scale, and mealybugs. Heteroptera, the least primitive of the hemipteroid assemblage, represents the true bugs. Bugs Main | Bugs Index | Hymenoptera Index | Beetles Index 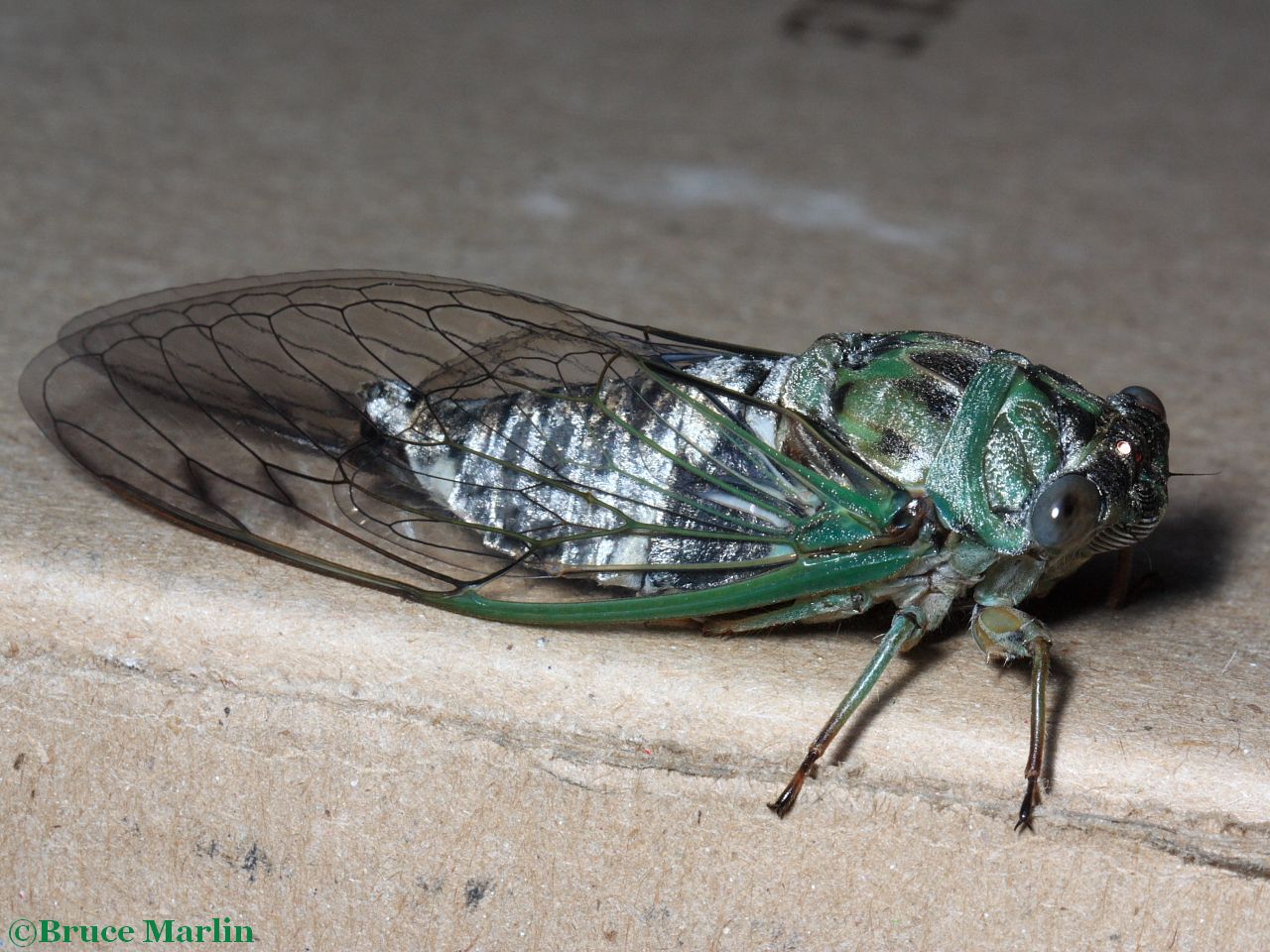 Cicadas are flying insects in the the Order Hemiptera. Their closest relatives are leafhoppers, treehoppers, and fulgoroids. Adult cicadas are large insects, and the males are said to be the loudest insect on Earth, at an ear-shattering 110 decibels. With prominent wide-set eyes, short antennae, and clear wings held roof-like over the abdomen, cicadas are probably best known for their conspicuous acoustic signals or “songs”, which the males make using special structures called tymbals, found on the abdomen.

All but a few cicada species have multiple-year life cycles, most commonly 2-8 years. In most cicada species, adults can be found every year because the population is not developmentally synchronized; these are often called “annual” cicada species. In contrast, populations of the periodic cicada species are synchronized, so that almost all of them mature into adults in the same year. The fact that periodic cicadas remain locked together in time is made even more amazing by their extremely long life-cycles of 13 or 17 years. 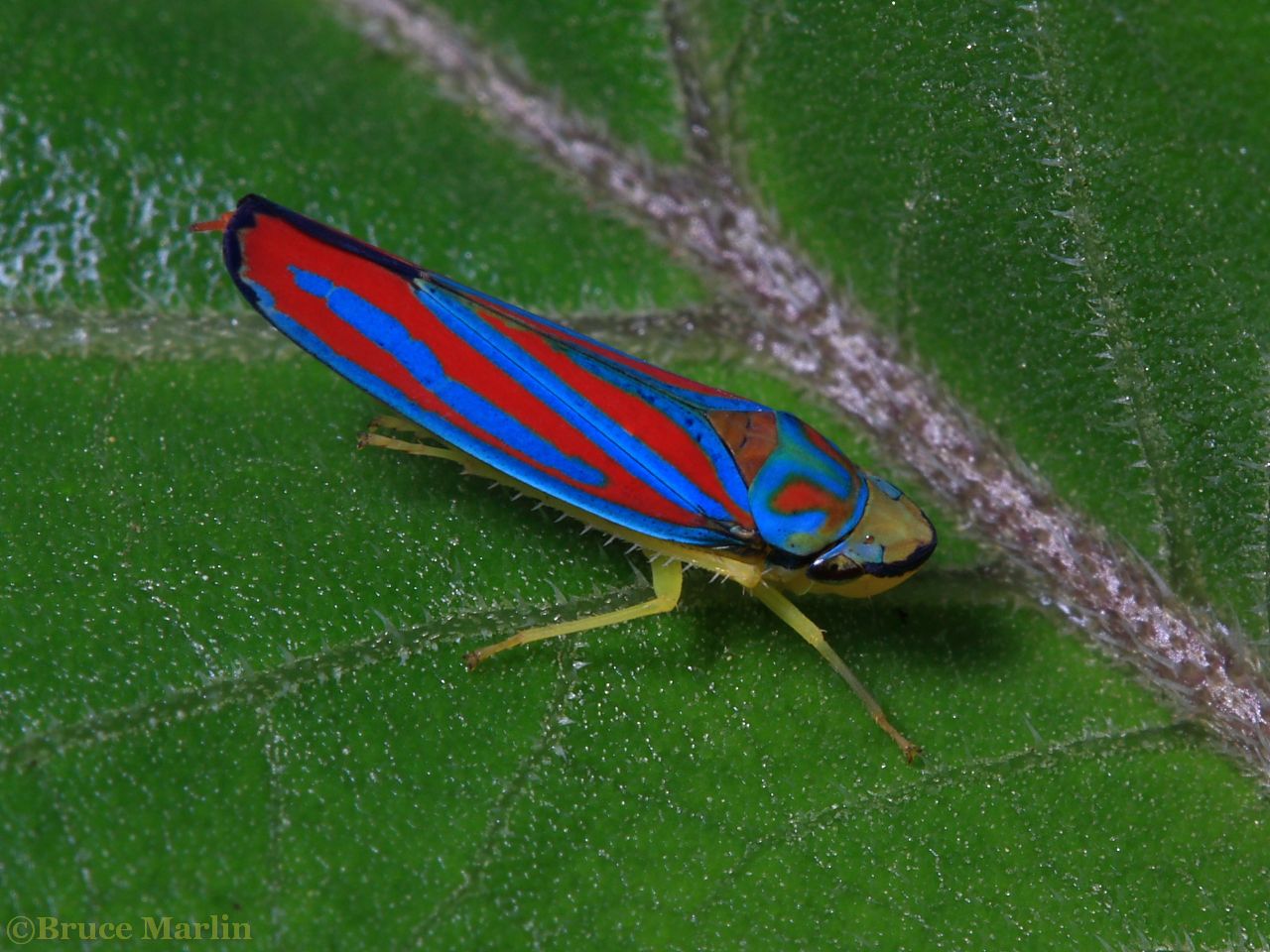 Family Cicadellidae – Leafhoppers
“Sharpshooter” is one common name for the leafhopper subfamily Cicadellinae, which includes Paraulacizes, Oncometopia, Cuerna, Draeculacephala, Graphocephala and many other genera. They get this name from their habit of feeding on the watery sap of xylem tissue, which conducts moisture from the roots up to the leaves. Excess water droplets are forced out the tip of the abdomen with an audible popping noise, hence the common name.

The red-banded leafhopper is widely distributed in North and Central America, from Canada south to Panama. G. coccinea has been identified as one of several leafhopper vectors of a leaf scorch known as Pierce’s disease, caused by the gammaproteobacteria Xylella fastidiosa. It is responsible for the decline of certain woody plants such as elm, oak, and other ornamental trees. According to the United States National Arboretum, “An understanding of the transmission of this bacterium by insect vectors is economically important because there is neither any known effective therapy for infected trees and shrubs nor a strategy for preventing infection.” I have these beautiful little pests by the hundreds in my flower gardens. 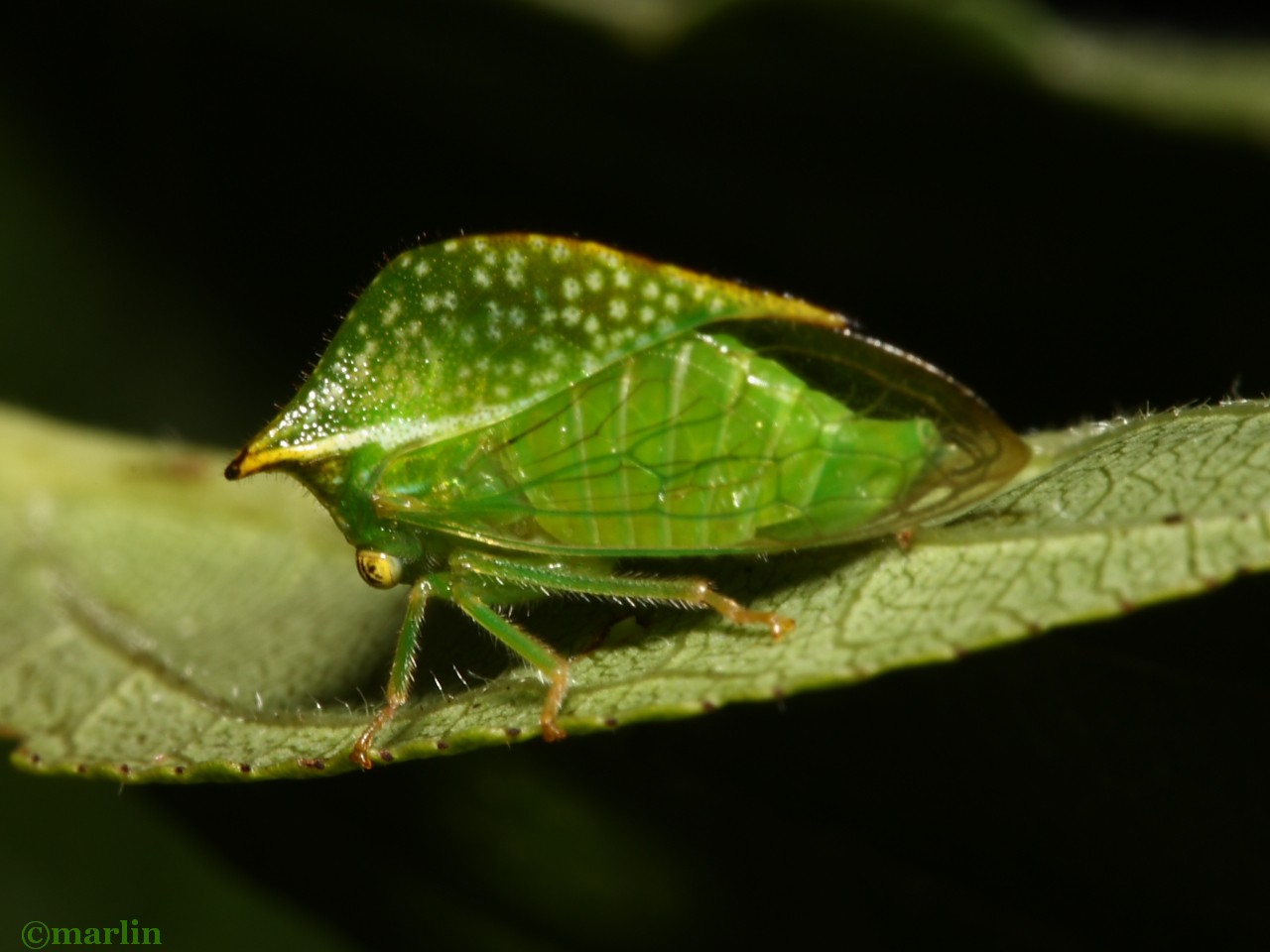 Individual treehoppers usually live for only a few months, but they belong to a lineage that is at least 40 million years old. The oldest undoubted treehopper fossils are specimens of a few as yet undescribed species from amber found in the Dominican Republic.

Auchenorrhynchan wings are uniformly membranous, unlike the true bugs which have a leathery portion at the base of their wings.  All Auchenorrhynchans feed exclusively on plants, but their diets vary tremendously as do their reproductive methods. Many species reproduce sexually, while others do so parthenogenically (without mating). Cicadas and leafhoppers mate sexually, and most females have large ovipositors which they use to deposit eggs into slits they cut in plant tissue. Aphids can reproduce without having sex, and are among the most destructive of all hemipterans – theoretically, one female aphid is capable of producing billions of offspring. 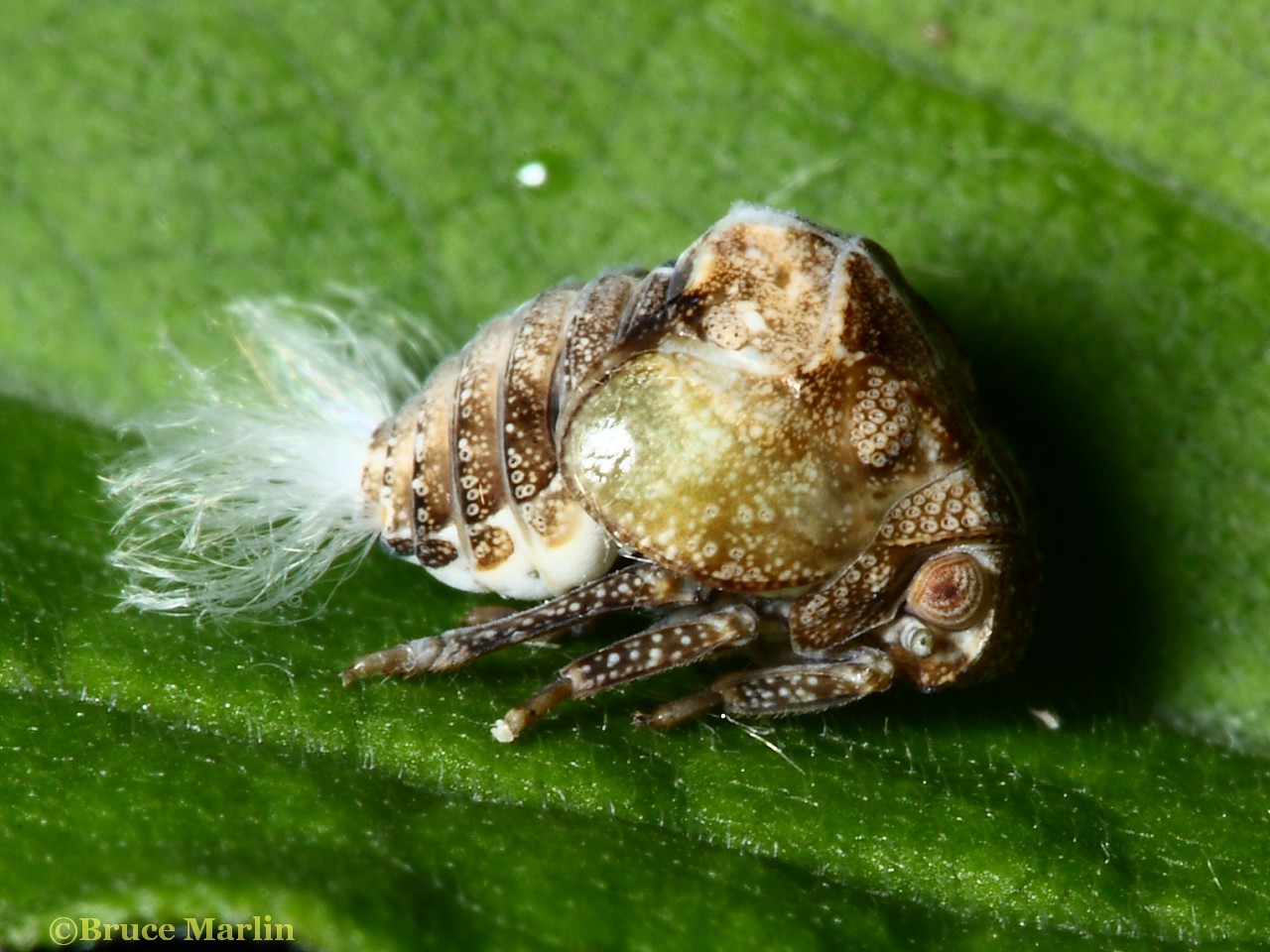 Many acanolid nymphs secrete a filamentous wax extruded from glandular tissue at the tip of the abdomen and various other areas according to species. The wax provides protection from predators and prevents desiccation.  The waxy coating also protects the insects from spider webs or puddles; they don’t stick to spider webs and they float quite well and can swim to safety.

Nymphs of the planthopper Ormenaria rufifascia create effective barriers to ants and larva of lady beetles by wiping their wax onto the plants they inhabit; insects which come in contact with the wax are contaminated topically, and consequently compelled to engage in extensive preening to rid themselves of the substance. Meanwhile, adults and nymphs escape by leaping away.