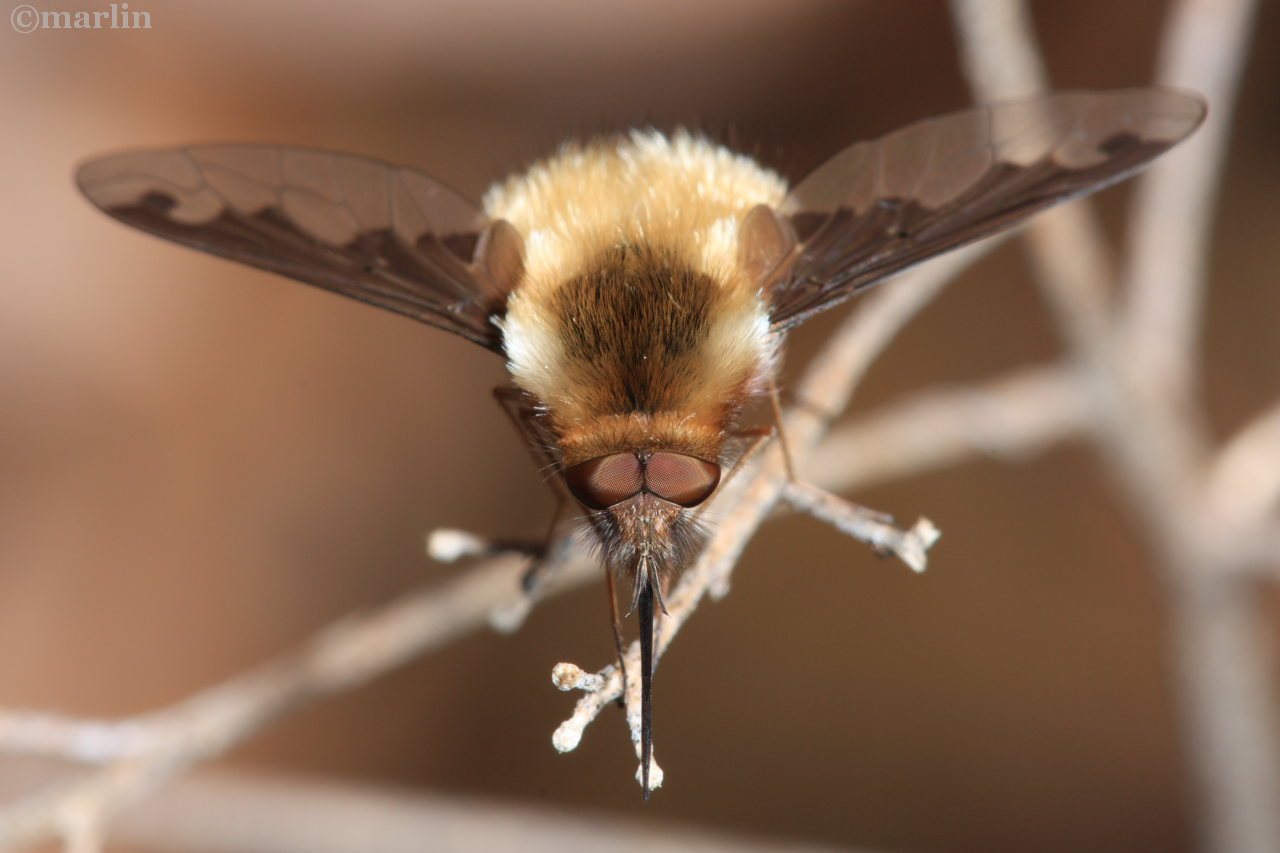 Bee flies do not sting or bite and are completely harmless to humans and pets. Bombylius species are by far the most numerous here in the American midwest. They are some of the earliest insects active in springtime – dandelions are some of their favorite flowers. Look for them along forest paths or disturbed areas with lots of flowers. They are very wary and demand a very low-angle, patient approach. If you blot out the sky, they will not hang around long since you look like a predator. 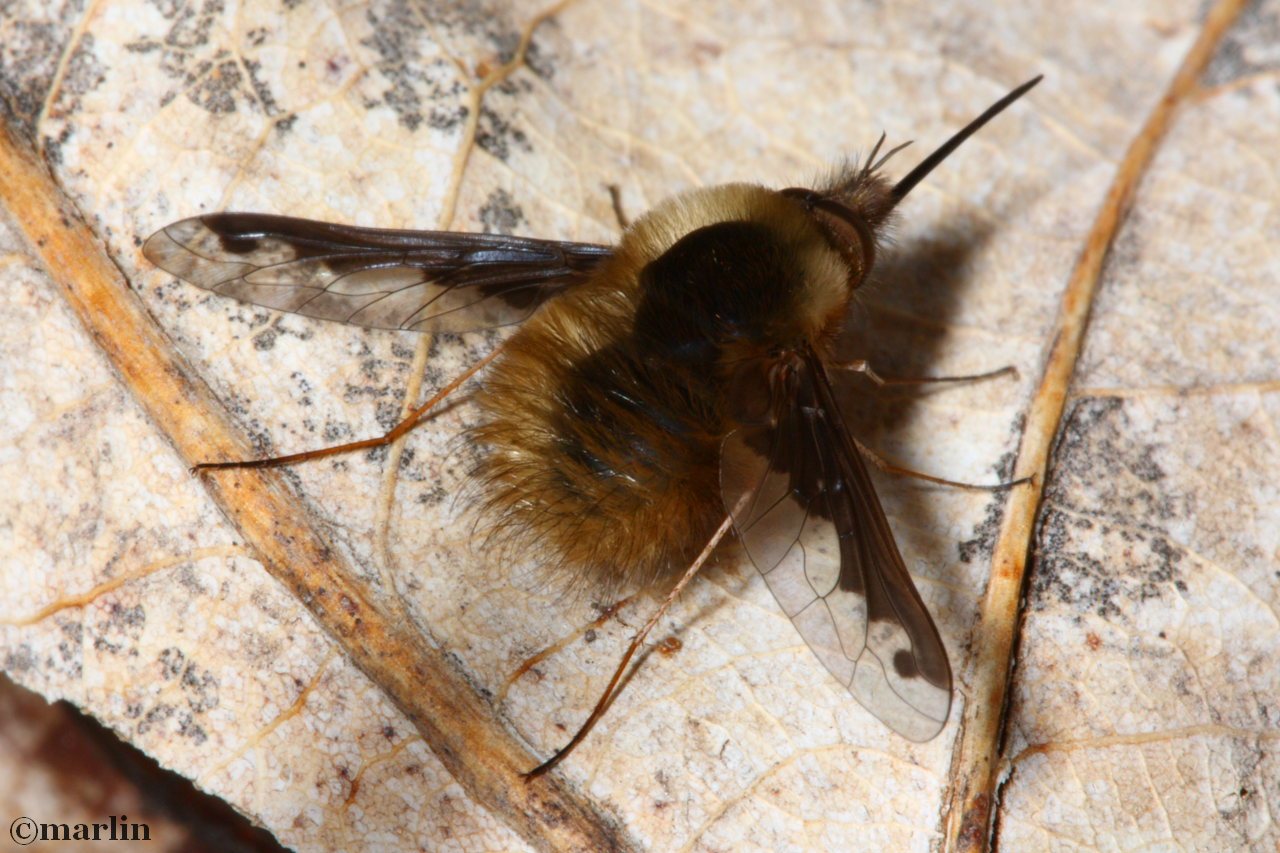 The conspicuous needle-like proboscis is adapted for sucking flower nectar. Many bee flies hover in midair while doing their nectaring, undoubtedly to avoid capture by insects or spiders lurking about flower blooms, looking for an easy meal, e.g. ambush bugs and crab spiders. 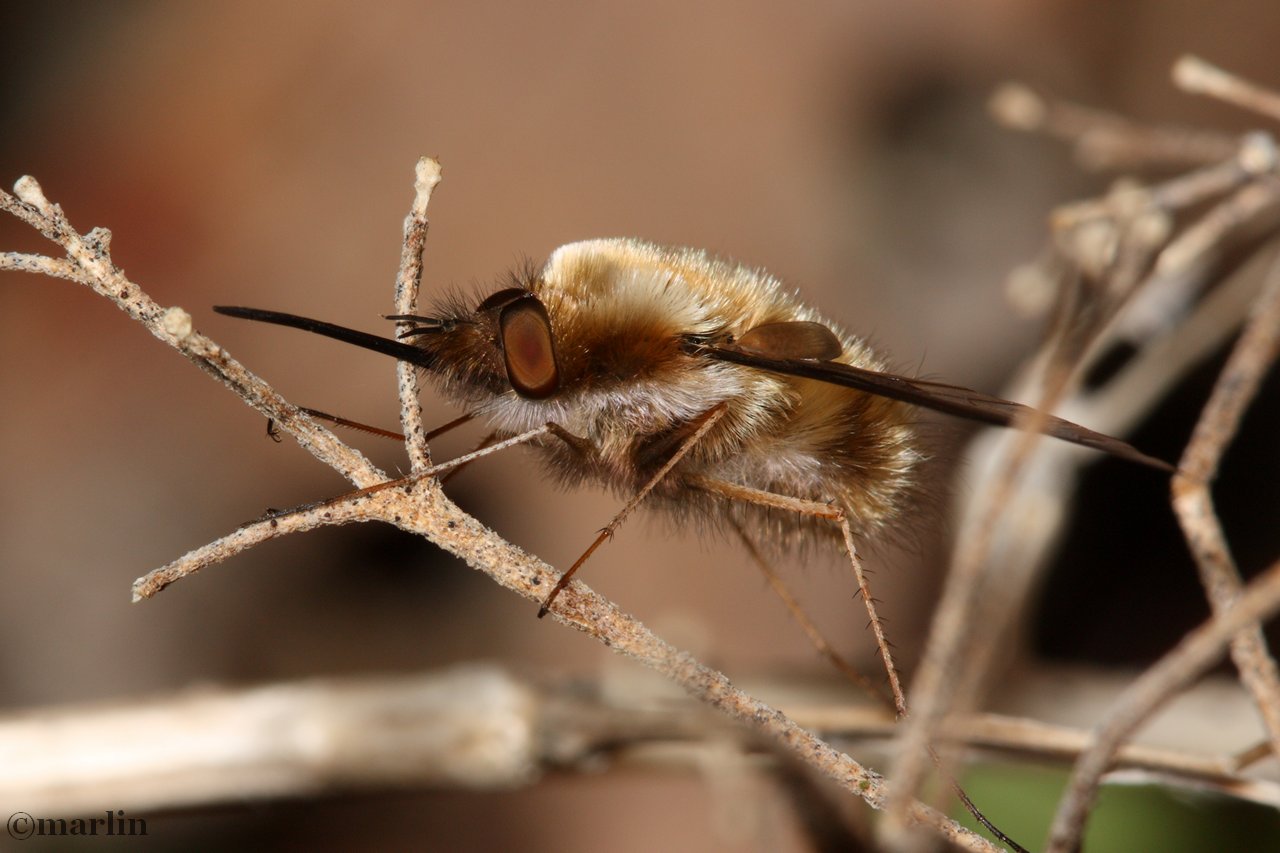 I most often see bee flies around flowers, or if resting, usually on the ground on bare soil. They are extremely wary and difficult to approach. No doubt their large compound eyes give them good vision, plus they have that air-motion sensing mechanism that helps the ordinary house fly avoid the swatter. Adult bee flies drink nectar, but the larvae are parasites of beetle larvae as well as the brood of solitary wasps and bees, the hole or burrow-nesting insects. 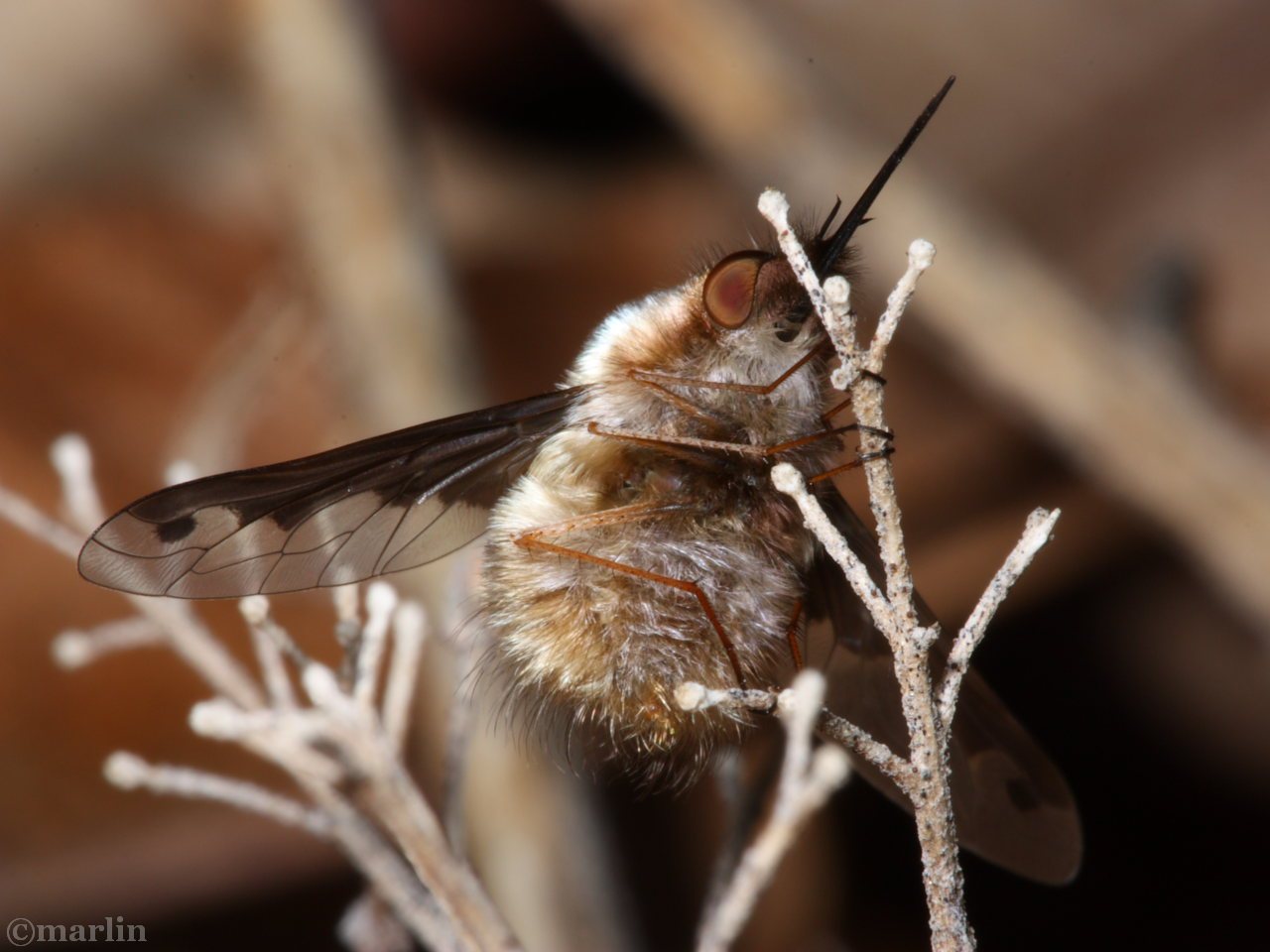 I happened upon some very cooperative bee flies on a very cool spring morning while traming around in an oak-hickory forest near Chicago. They were lethargic due to the low temperature, and let me approach them to within inches – something no hotted-up bee fly would ever do. So I crawled around in the leaf litter and got some shots from a worm’s eye view. You’ll not often see the ventral surface of a live bee fly, that for sure. I got lucky that day. 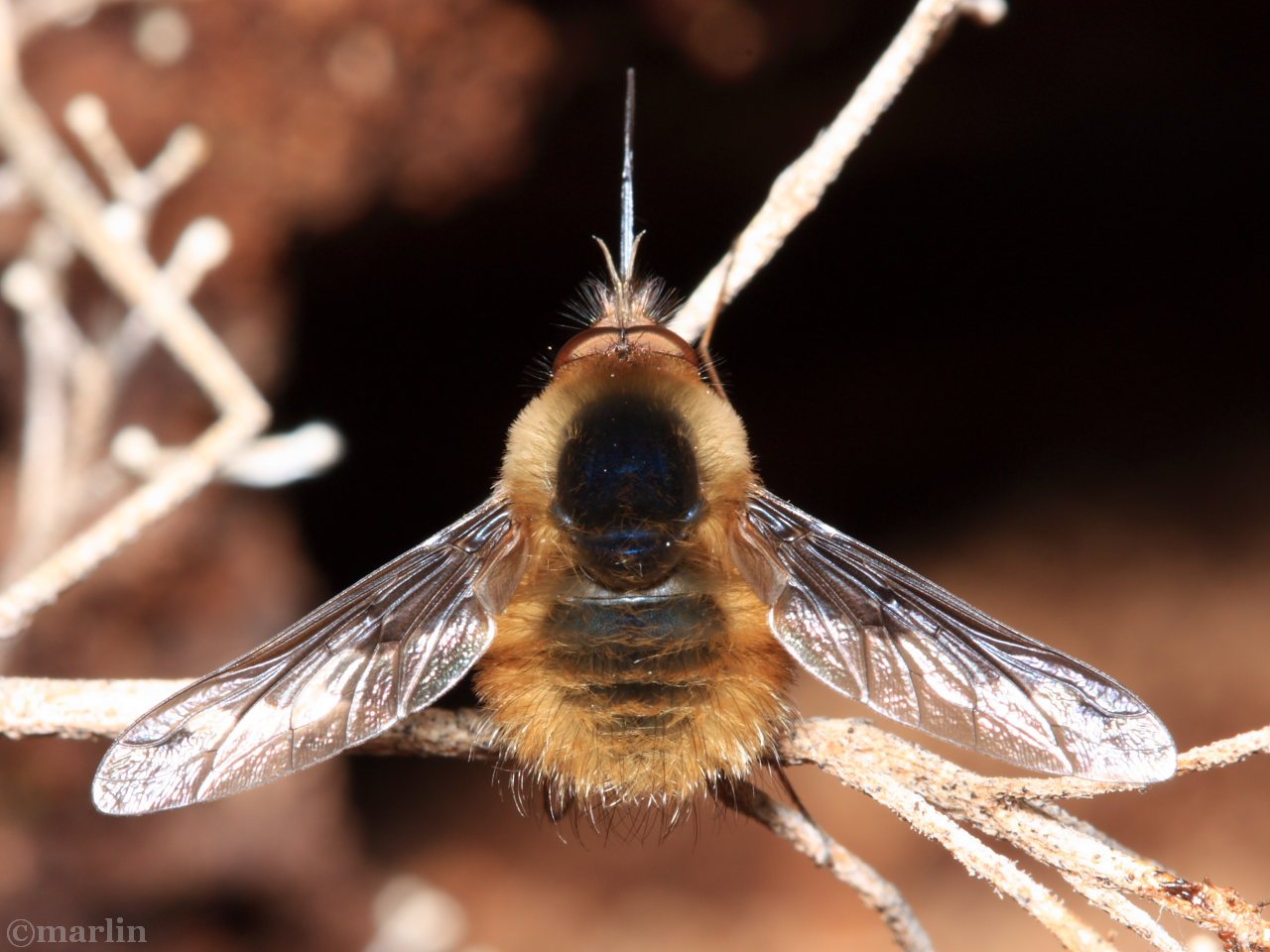 All in all, a fascinating insect worthy of study. Next springtime, why not take a trip to the woods? Anywhere with dandelions will do. You don’t have to buy tickets too see the show, and what could be nicer than a nice day in May, a blue sky filled with fluffy white clouds? Leave your phone in the car! 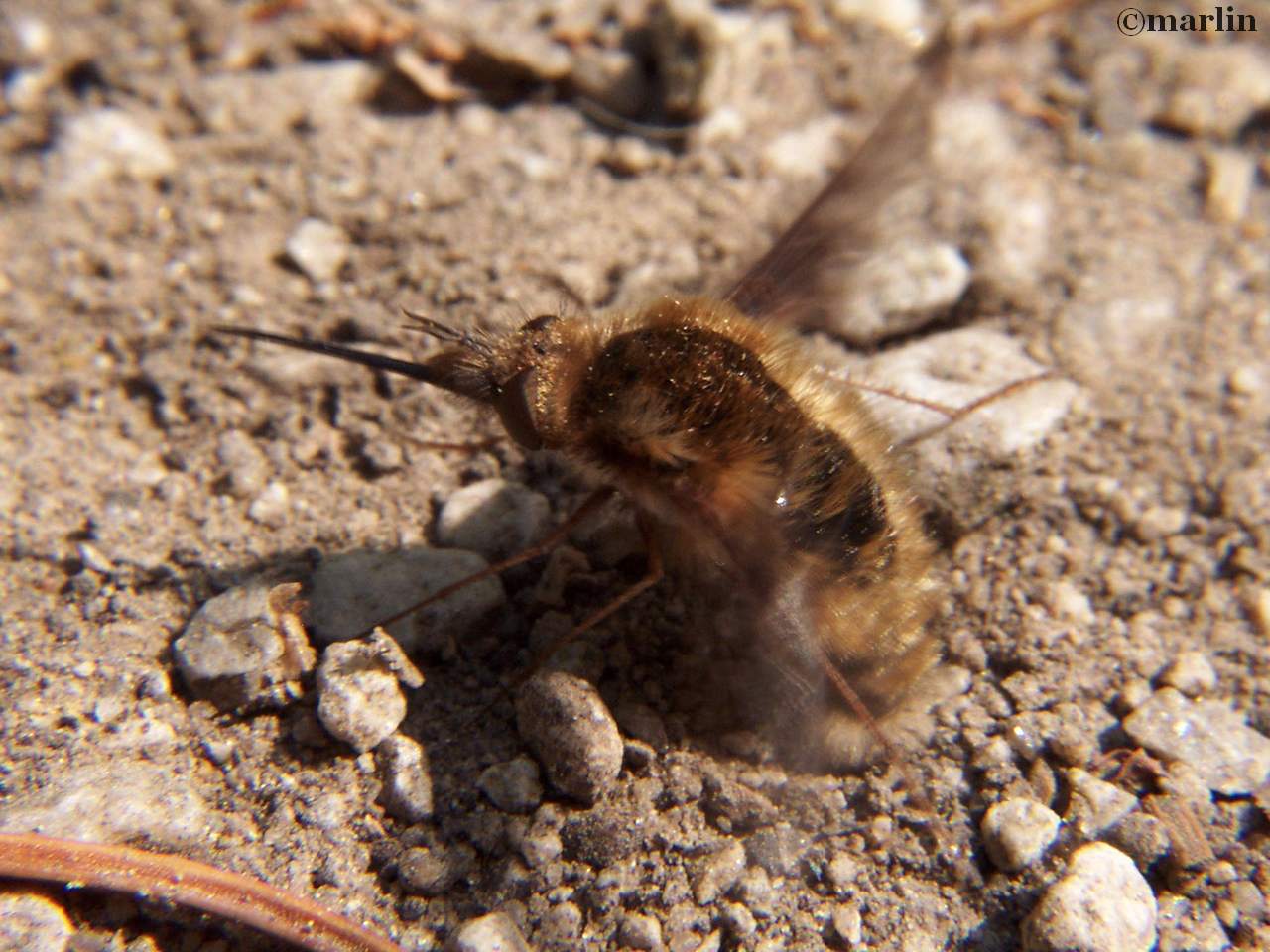 This female is vibrating her butt in the dust while laying eggs on the ground. If you look closely, you can see the little ring-shaped cloud of dust she is kicking up. I have seen some brands of syrphid flies do the same thing, and I have seen grasshoppers lay their eggs in paths paved with limestone tailings. These flies are fairly coated with very fine sand. The larval stages live as parasites in the nests of solitary bees (e.g., Andrena, Halictus and Colletes species), where they eat the food stores and grubs of their host. 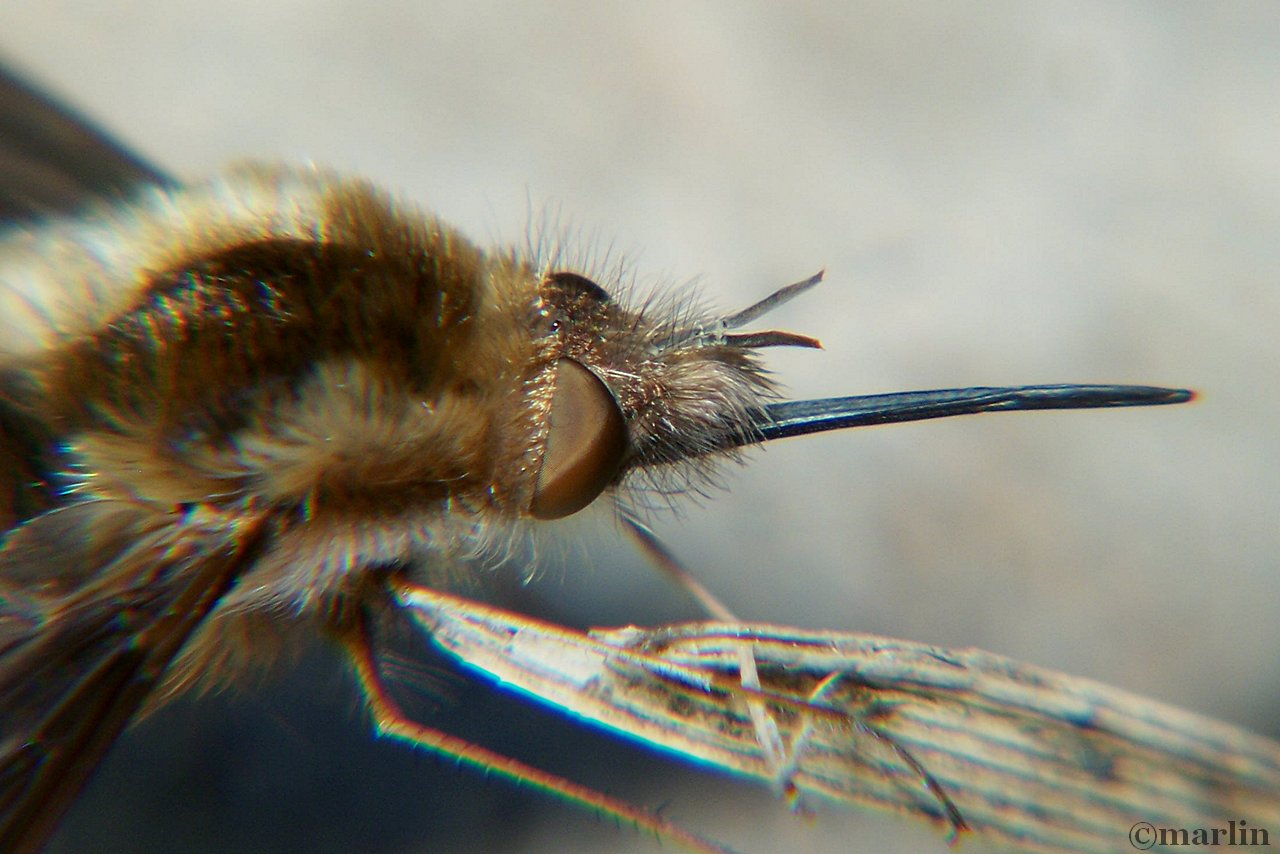 Proboscis looks wicked, but bee flies are harmless. Harbingers of spring, these tiny dancers are called by the Japanese biroudu tsuriabu – which sounds as magical as the beasts themselves. | Flies Index